TEAM GREEN ALL THE WAY 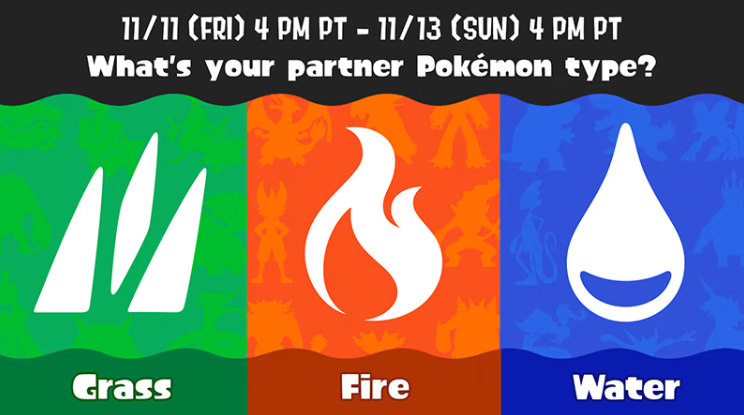 It’s time to make your final choice, everyone. The second Splatfest for Splatoon 3 is nearly upon us, and it’s going to be a doozy!

But let’s take a step back. Splatfests are special in-game events in Splatoon 3—they’re festivals with fancy floats, catchy music, and impossible decisions. Impossible decisions like this one: When choosing your partner Pokémon, which type would you choose? Grass-type, Fire-type, or Water-type?

Splatfests are special, limited time events in Splatoon 3 where players choose to champion one of three causes. After you make your choice, you’ll rep your team in Splatfest Battles , where the goal is to ink as much of the stage as you can without getting splatted too often. An ultimate winning side will be declared at the end of the Splatest, answering the question once and for all!

How do I choose a side?

After you start the game, go to the little stall in Splatsville to choose your destiny. This Pokémon question is super tough, so go with what your heart says. After all, you won’t be able to change your mind after picking!

After choosing, you are then given an in-game t-shirt that’s worn during the event. This shirt come with a special ability: Ability Doubler (true to its name, it doubles the effect of other gear abilities attached to this gear).

Oh, one more thing for the Sneak Peek and Splatfest timeframes—every time you gain a level in your Catalog, you are also given something called a Conch Shell. These guys can be redeemed at the machine in the Lobby for some fun little goodies. Redeem early and redeem often! They can’t be used for anything else, after all.

What else changes during a Splatfest?

A bunch of stuff does! In addition to how Splatsville looks and sounds, these Splatfest Battle types will replace the normal ones: Open, Pro, and (halfway through the event) Tricolor. In “Open” you can enter a match with a group of friends. Pick “Pro” if you’re more a solo player—everyone on the teams will be randomized.

How do I play Tricolor Turf War?

This mode is new to Splatoon 3 and are 2v4v2 matches. Halfway through the Splatfest, pick the Tricolor option when choosing a mode in the Lobby. You’re not guaranteed a Tricolor match, but it’s the only way that they will pop into rotation.

Basically, the team of four starts in the middle of the map and is trying to defend their territory against the two other attacking teams (who are technically working together in this mode but can still splat each other!). You still need to ink the most ground to win, but the pressure is on the defenders to hold their ground.

The defending team (who is also the current first place team of the Splatfest), also needs to defend something called the Ultra Signal. If someone from the attacking teams touches the Ultra Signal long enough, a Sprinkler of Doom will be summoned to the battlefield to spray ink everywhere. It’s as intense as the name “Sprinkler of Doom.”

What do you get for winning a Splatfest?

Well, the winner gets bragging rights of course! But if you’re looking for something more material, everyone who participates will get Super Sea Snails after the Splatfest. The winning side will get more (obviously).

Talk to Murch who hangs outside the Lobby if you’re not sure what to do with those. The short version is that Super Sea Snails can be used as a shortcut to upgrade your gear and get abilities that match your needs better.

Psst, want a pro tip? If you’re in the market for ability chunks, talk to Murch during the Splatfest. Scrubbing equipment off your Splatfest Tee is much cheaper than normal, so you can scrub-a-dub way more than usual and get way more ability chunks. Let the good chunks roll!