Looking Back On Sonic's Nintendo-Only Games

In 2001, many die hard SEGA fans cried out in sadness. SEGA announced that they would no longer be making consoles of their own, but instead would become a third party developer and would make games for all consoles. This included their former arch rival Nintendo, and veterans of the 90’s console wars shuddered. “Sonic on a Nintendo console!? Blasphemy,” they would say. Over 20 years have passed since SEGA’s decision and Sonic has had a very interesting ride on Nintendo systems. Some have been great (Sonic Advance), others have not been so good (Sonic Boom: Rise of Lyric). To be clear this piece is going to focus on games that were initially released on/for Nintendo consoles ONLY. No compilations (sorry Sonic Gems) or titles that were released for all major consoles (again, sorry Sonic Mania). With that in mind, let’s look at Sonic’s first outing on a Nintendo system, the Game Boy Advance. 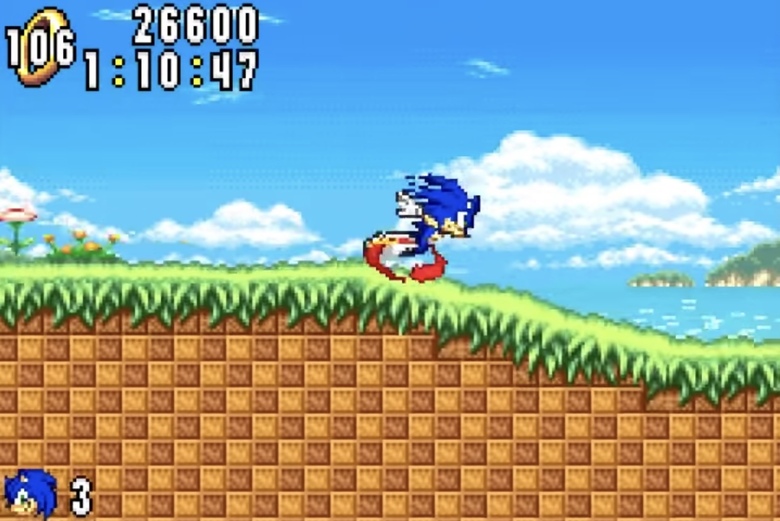 While not the first time the blue blur was on a handheld, the Sonic Advance games for the GBA showed promise for Sonic. With the first game to come out in 2002 the series was very well received and all three titles have great Metacritic scores. As to why they were so well received it was mostly because these games were newer 2D Sonic titles. Since the GBA was technically a 32-bit system the games looked gorgeous and the sprite work was impeccable. THQ developed the games and some argue it’s some of the best work they have ever done. It was a good transition to the GBA for Sonic and in Sonic Advance 3 a new mechanic was introduced with Teams. Think like back in the Genesis games where Tails can tag along, except in Advance 3 you could have any team member you wanted and new abilities would be yours to use. Besides the Advance games the other title worth mentioning is Sonic Battle which came out in 2004. This title is different because it’s an arena style brawler where you fight other characters. While this isn’t Sonic’s first foray into the fighting genre, it was definitely odd to see a brawler like this on the GBA. This game did get mixed reviews, but was much better received than the GBA port of the original Genesis game. Which we won’t talk about here. 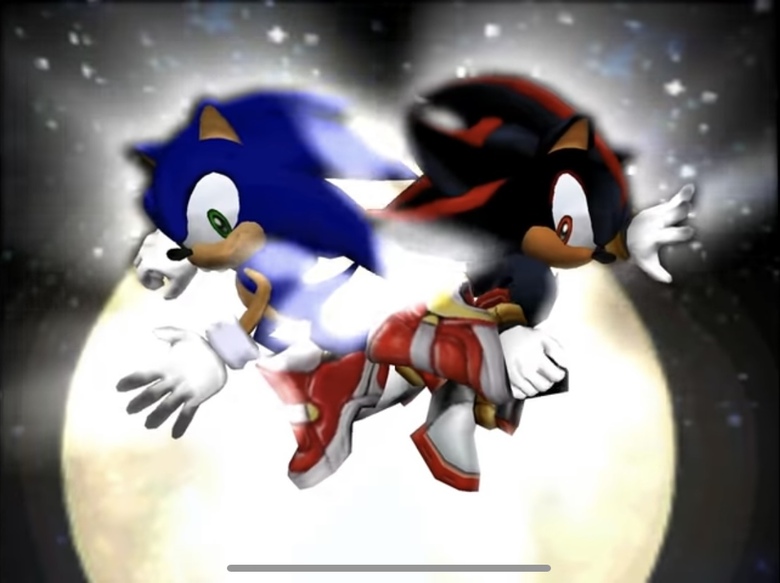 After SEGA made the announcement about leaving the console business, you could imagine the shock from SEGA fans when it was announced that an updated version of Sonic Adventure 2 would be a GameCube exclusive. Sonic Adventure 2: Battle was marketed for the game’s multiplayer aspect as new modes and character skins were added to the GameCube version. The graphics were also given a bit of an upgrade but a main complaint was the camera controls. While many gamers liked Battle, critics were tougher on it. Same can be said for Sonic Adventure: DX Director’s Cut. While it’s great that both Adventure games are now on the GameCube, with new features for the Chao Garden and GBA features, not much was done to fix the voice acting or the dated camera controls. Still it was a solid outing and, fun fact, Sonic’s first game that spanned all the major systems at the time, came out on the GameCube first. Sonic Heroes was released on the GameCube on January 6, 2004 while the PlayStation 2 and Xbox wouldn’t see the game until January 27th. Kinda funny how Nintendo got the game first huh? 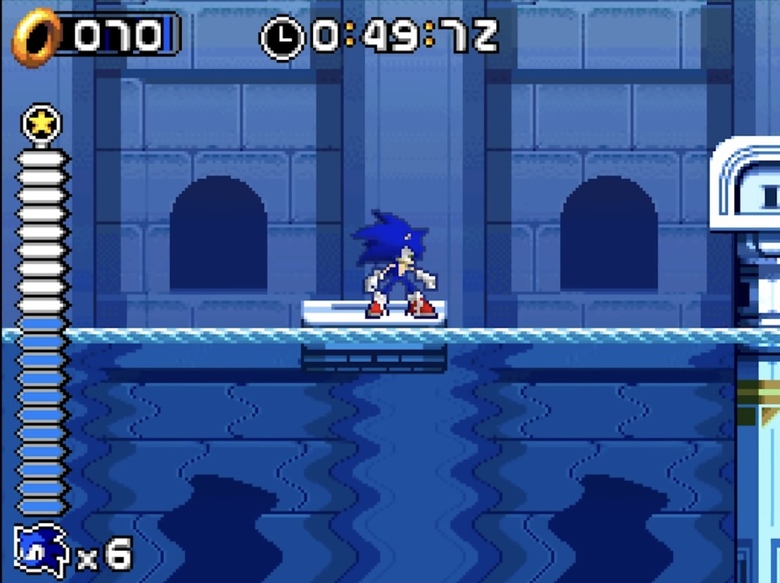 The DS only saw 3 Sonic titles, and while 2 are true to form Sonic games, the other is something new entirely. The games in question are Sonic Rush, Sonic Rush Adventure and Sonic Chronicles: Dark Brotherhood. The Rush games, like the Advance games, go back to classic 2D style Sonic gameplay. What makes these games a standout is that the games utilize both screens of the DS so that no space goes unused. Meaning if Sonic was running on the lower screen and would get launched to the top the action would continue on the top screen. The Rush games would do pretty well in the eyes of both fans and critics for its visuals and 2D gameplay. Outside of the clever way to use the screens, the games also featured a new character, Blaze the Cat, who was also playable. The story is that Sonic gets transported to her dimension and helps her out with her version of Dr. Eggman. Sonic Chronicles is an entirely new entry in the series for it’s a turn based RPG that was developed by BioWare (the makers of Mass Effect). The game got mixed reviews, mostly because people thought the game was way too easy for a turn based RPG. Chronicles remains the only RPG Sonic ever starred in to this very day. 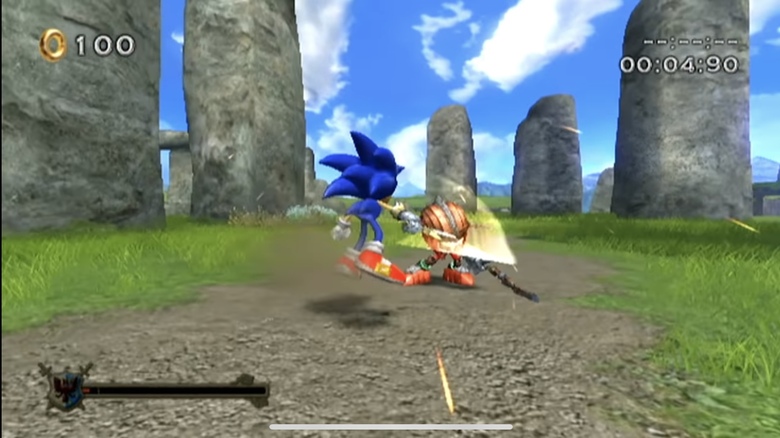 For a solid amount of time, Sonic games that were only on Nintendo consoles have been well received for the most part. The handheld games were keeping the 2D style alive and well and the ports of the Adventure games did OK. Sure Heroes got a bit of a mixed reaction but things were about to change, sadly not for the better. It was here that SEGA wanted to make their new Sonic reboot for the more powerful PlayStation 3 and Xbox 360. Nintendo still wanted Sonic games on their system so SEGA offered to make them 3 exclusive titles for the Wii. Only 2 of these exclusives would see the light of day, and they would take Sonic in a new story direction. Literally. Dubbed “The Story Book Series” these games would take Sonic and toss him into storybook settings. The first outing, Sonic and the Secret Rings put Sonic in the realm of the Arabian Nights. The gameplay for this title was tweaked from other 3D Sonic games where this was an auto runner and the player needs to steer Sonic to avoid obstacles. A decent idea but the Wii’s motion controls would work against you most of the time. Especially when you need to make a precise turn or the sensor bar wouldn’t register the motion to perform a Homing Attack. It was fun seeing some of Sonic’s friends all dressed up like Sinbad and Ali Baba, but they weren’t playable and only showed up in cutscenes. The second game, Sonic and the Black Knight, put Sonic in the realm of King Arthur and this is the one that really put off fans. Black Knight had some of the same control aspects of Secret Rings but giving Sonic a sword didn’t do much to help. Like Secret Rings before it, Sonic characters were all dressed up to look like King Arthur’s knights, but some of the cooler designs were relegated to multiplayer mode only. Thankfully, the final game for the Wii would give fans hope. Sonic Colors. Now this game had a dual release on both the Wii and DS (and wasn’t a part of that exclusivity deal from earlier), but while the DS version is fine, the main event was on the Wii. Not only did this game go back to 2D Sonic gameplay, but new little aliens were introduced, called “Wisps”, and they gave Sonic new abilities for a short amount of time. This game alone gave the fanbase something to cheer about as the gameplay felt rejuvenated thanks to the new Wisp powers. Sonic could burrow, shoot through water, stick to walls like a buzzsaw, and act like a rocket. Many fans point to this game as being one of the best Sonic games at the time. Things seemed to be looking up again for Sonic, until the Wii U came along. 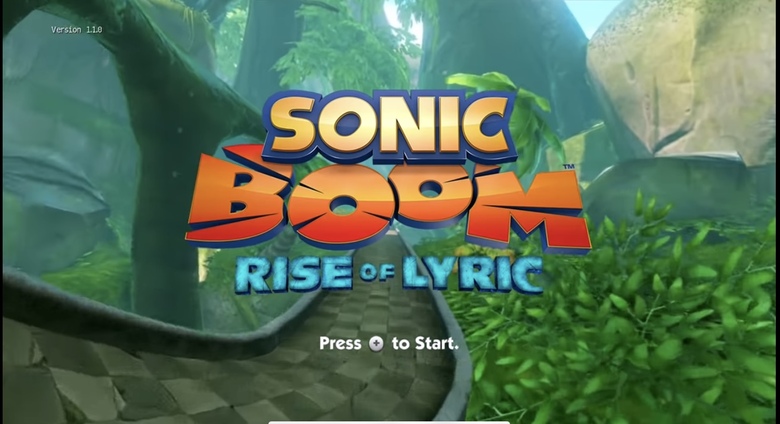 Before we get to the big disaster, we have 1 game to go over first. Sonic Lost World. This title borrowed some aspects from Super Mario Galaxy a la the tiny planetoids you can visit, and added a “Run” button. The game received mixed reviews and was a bit of a downer after the beloved Sonic Colors and Sonic Generations which was on other consoles. The biggest blemish of Sonic’s Nintendo only library is, of course, Sonic Boom: Rise of Lyric. This game has been dragged through the mud so much by gamers and journalists there isn’t much we can talk about that hasn’t already been said. Seriously, go to YouTube after reading this and search for the game. Thesis’ have been written about this shortcoming for the blue blur. From the redesigns, to the gameplay, to the glitchy mess that could make you jump forever (before that got patched), Sonic Boom was the most HATED Sonic game since Sonic ’06. Fun fact the Metacritic score for Rise of Lyric is actually WORSE than Sonic ’06! Now Sonic Team (the main Sonic devs) didn’t directly work on this game, but instead outsourced it to Big Red Button. They did however keep a close eye on the team but fell into the same problem that plagued ‘06. SEGA had Big Red Button rush the game out to make a set in stone release date. Had Big Red Button been given more time, things may have turned out differently, but sadly Rise of Lyric still remains one of, if not the “worst” Sonic game ever made. 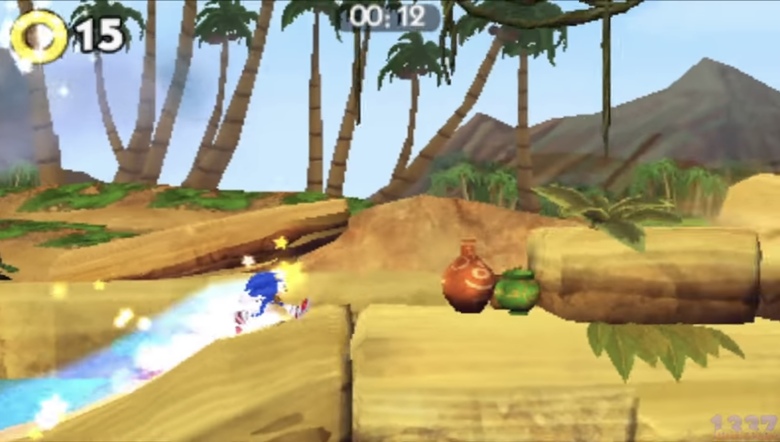 While things went from bad to worse on the Wii U, the 3DS titles were either bad, or middle of the road. The only original games the 3DS got were Sonic Boom: Shattered Crystal and Sonic Boom: Fire and Ice but the port of Sonic Generations is different enough to earn a mention. While the console version had both 2D and 3D stages, the 3DS version stuck with 2D, but had different stages and bosses from the console version. Lost World also saw a 3DS port and this had the honor of being entirely in 3D on a handheld device. However Sonic Boom also had problems on the 3DS. Shattered Crystal was released alongside Rise of Lyric and was also panned by critics and fans. When SEGA announced a third Sonic Boom game for the 3DS you can believe fans braced themselves for more disappointment. Thankfully Sonic Boom: Fire and Ice *wasn’t a huge letdown. While not the best game it is the best *Sonic Boom game according to fans and Metacritic, but that’s hardly a high bar to pass. It’s a bit of a shame the 3DS didn’t get anymore great original Sonic games. The DS had some great original titles, while the 3DS got games that were either overshadowed by the console versions, or horrible at their worst and OK at their best.

So what happened after Rise of Lyric? Well SEGA decided that future Sonic games would come out for all consoles as their previous contract with Nintendo was put to bed. Meaning that for the foreseeable future, Sonic will be on all systems at the same time. Already this seems to be the best idea moving forward, as even now some new games aren’t running the best on the Switch (Sonic Colors Ultimate being the prime example). Even with the less powerful hardware, older 16-bit Sonic games still feel more at home on a Nintendo console than say the PlayStation. It could be that because SEGA and Nintendo have such a history together that those older games feel just right on a Nintendo console or it could be us just thinking about how we got here. These hardcore rivals finally buried the hatchet and have been in a (somewhat) harmonious relationship for over 2 decades now. We don’t know exactly what’s going to happen next, but what we are happy about, is that Sonic will have a home on Nintendo consoles, no matter what.