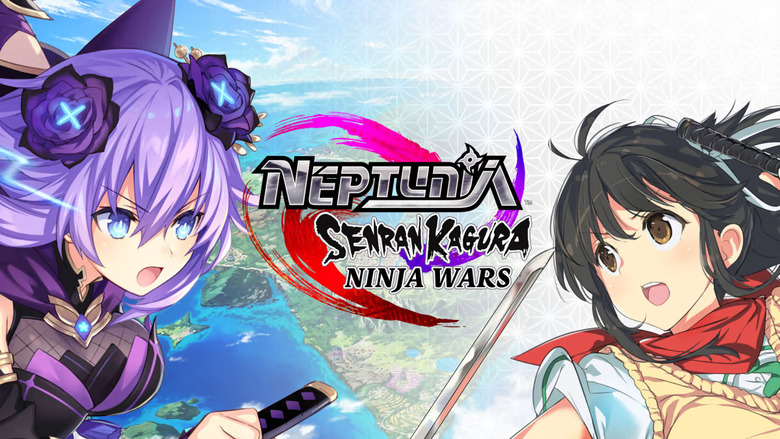 The Hyperdimension Neptunia and Senran Kagura franchises are both long-running series’ by Compile Heart/Idea Factory and Marvelous respectively. While Neptunia has comfortably settled itself in the JRPG genre, Senran Kagura has jumped across several genres. Now, the two combine for the first time in an all-new experience: Neptunia x Senran Kagura: Ninja Wars.

Neptunia x Senran Kagura: Ninja Wars is an action RPG combined with hack-and-slash elements. The game tells the story of the people of Gamninjustri (a ninja-themed play on the usual setting of Neptunia, Gamindustri) and a war that has been going on for years. Unlike most crossover games that feature two worlds suddenly merging and the confusion that results, in the setting of this game, the Neptunia and Senran Kagura worlds have coexisted for a long time. 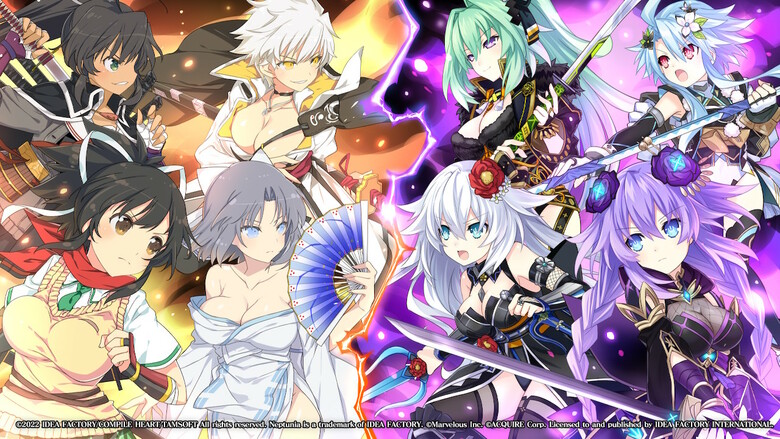 The major lands of Gamninjustri, Heartland and Marveland, have been at war with each other for longer than most people can remember. Each of them vying to destroy the other nation’s Share Crystal to turn the war in their favor. Leading the charge are the 4 Ninja Goddesses of Heartland, each trained in the Compa Style Ninja Arts, and the 4 Honeypa Shinobi of Marveland, experts in the Honeypa Style Ninja Arts. 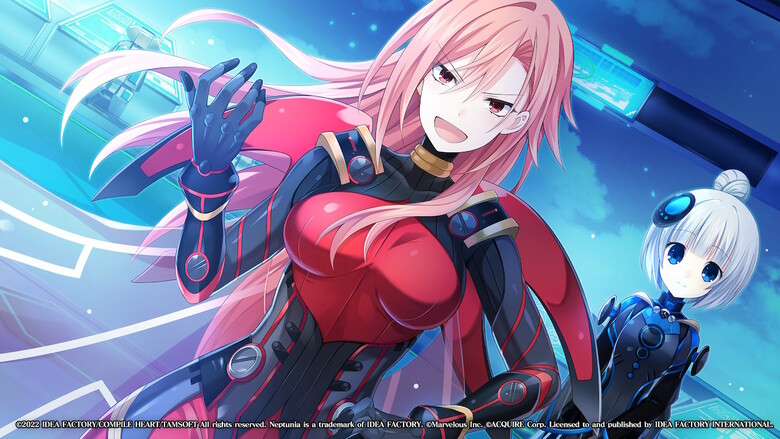 Suddenly, the tides of war change as Gamninjustri is invaded by the Steeme (pronounced Steam) Legion. Led by Yoh Gamer and her self-proclaimed manager, Tetsuko, the Steeme Legion seeks to extend the war between Heartland and Marveland to include the entirety of Gamninjustri, all to determine which nation has the strongest ninja. Deciding to band together against this common enemy, the 4 Ninja Goddesses and the 4 Honeypa Shinobi set out to protect the people of Gamninjustri from the Steeme Legion, and drive these intruders out of their home for good.

As mentioned before, Ninja Wars is an action RPG/hack-and-slash game, feeling somewhat like the Dynasty Warriors series. Every character has a basic combo to their name, along with a series of “Ninja Arts” they can activate via a menu to augment their combos. While you’re never fighting more than a handful of enemies at a time, the action can still get hectic at times. Enemies don’t tend to wait for their allies to finish attacks before beginning theirs, so you’ll have to deal with barrages of attacks quite often. 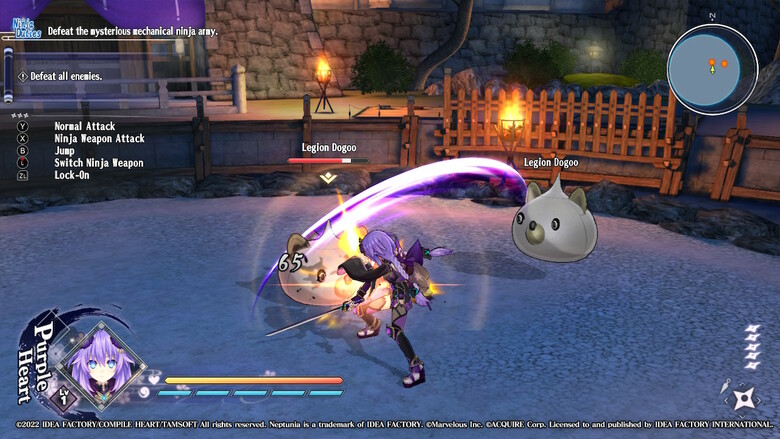 Slicing up robotic dog slimes, who hasn't been there before?

The combat is well-executed, but as usual with these games, it’s all too easy to fall into a gameplay loop. You run to the next group of enemies, spam the same combo, and then repeat. Since enemies in the early/mid-game are rarely a threat, you’ll hardly ever feel challenged by them, so there’s no need to switch up your plan of attack.

Outside of the main hack-and-slash action, the game tells its story via visual novel segments. There’s not much to say about them, as they’re just cutscenes used to break up the action. That said, the writing is funny and charming, with every character filling their own niche within the group. There are even moments where the game pokes fun at its own premise, including Neptune addressing the player themselves to ask if they’re surprised to see her and her friends as ninjas. 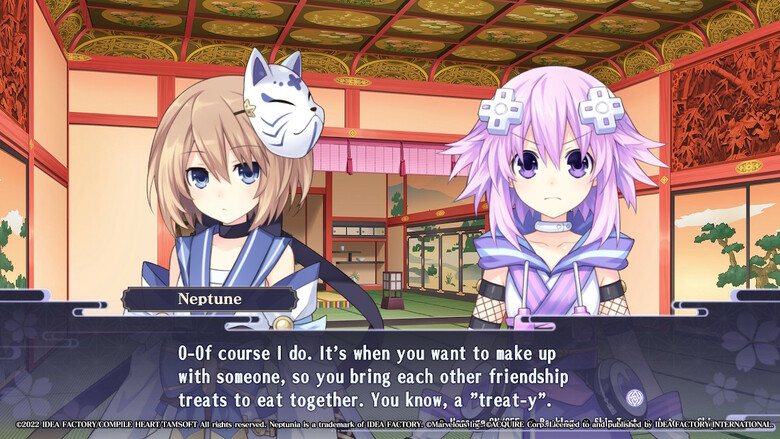 It’s certainly easy to see the writing in this game as too trope-y or generic, but personally, I enjoyed watching the visual novel scenes play out. As someone only vaguely familiar with both Neptunia and Senran Kagura, it was nice to get to know these characters over the course of the story.

The main playable characters aren’t the only major players in the story either. There are plenty of appearances from other characters, including Histore, Compa, and IF from Neptunia. Also joining the roster is Goh the Crow, the protagonist of co-developer Acquire’s oft-forgotten game Shinobido. Though he looks a bit different in this game…

While the visual novel segments take up a lot of moments in the gameplay, that’s not to say there’s nothing to do outside of the main story missions. Plenty of sidequests are included, and there are opportunities to talk with your party and other residents of Gamninjustri to get information, items, and more. 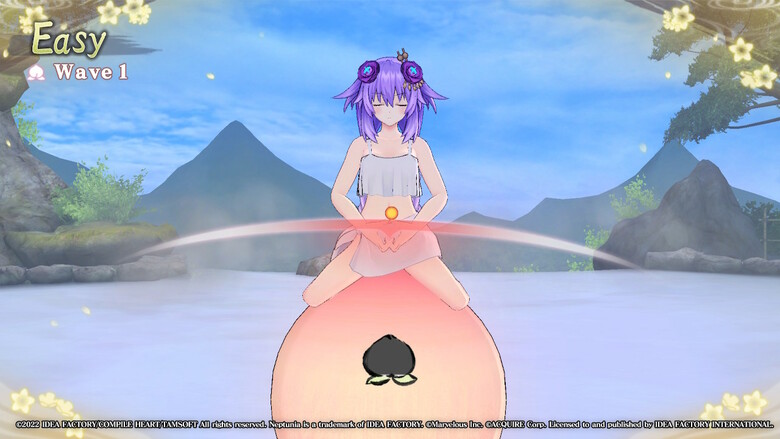 A feature unlocked about halfway into the game is P&C Meditation, where you use gyro controls to keep yourself balanced on a giant peach. Completing the meditation offers you various buffs that last for the next few story missions, along with items. It’s easy to overlook this feature after the tutorial that introduces the concept, but meditating can be well worth it before going off on your next mission.

For a game like this, you might expect performance issues when running on Switch, but thankfully, the game runs smoothly the whole way through. In my playthrough, lasting about 12 hours, I didn’t notice any performance hiccups that hampered my enjoyment of the game. 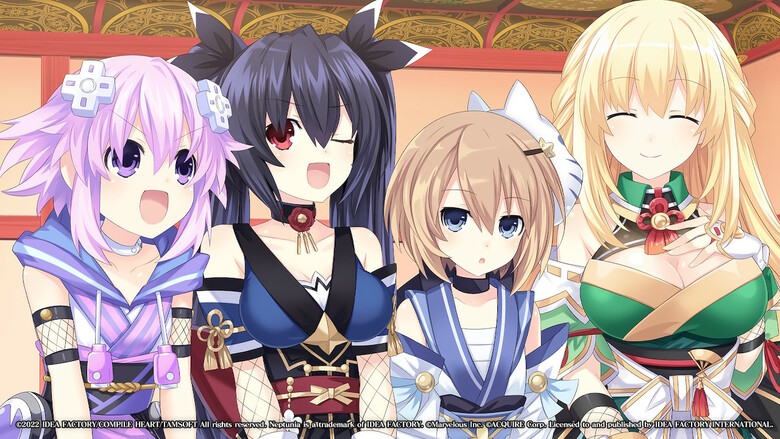 Ninja Wars is a short-but-sweet game. As mentioned, you could beat the story in about 12 hours, and from there, you can choose to tackle side content. While it’s not the longest game out there, and some people may not like the overly cutesy anime style, I never saw those as downsides.

I think those who give this game a shot will find a rather enjoyable hack-and-slash adventure that keeps your attention start to finish.