Shin-chan: Me and the Professor on Summer Vacation – The Endless Seven-Day Journey getting worldwide release

You can bet your pat-pat I'm picking this up 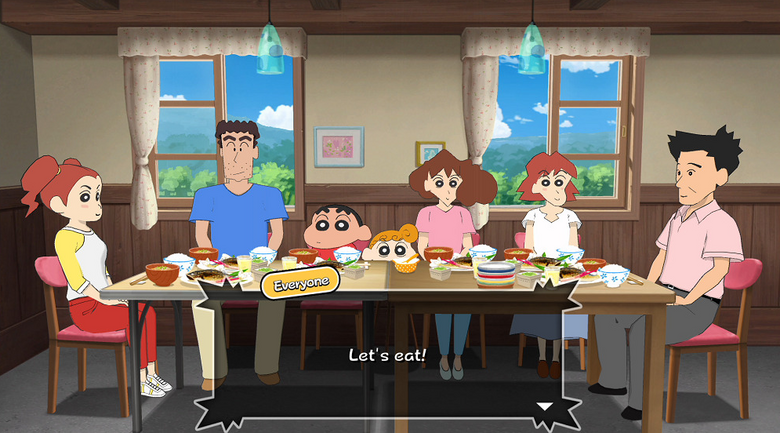 Fans of Shin-chan, your day has come. Publisher Neos Corporation and developer Millennium Kitchen have announced that Shin-chan: Me and the Professor on Summer Vacation – The Endless Seven-Day Journey is getting a worldwide release. The game is due out August 2022, and it will support English, Japanese, German, Spanish, and Portuguese subtitle options.

If you want to see more screens for , you can find a gallery here. To see a full breakdown of the game, check out the official press release below.

Hiroshi has to go on a business trip to Kyushu, so now the entire Nohara family has decided to stay with an childhood friend of Misae’s in Assou, Kumamoto.

But when they arrive at Kumamoto Station on their way to Assou, they meet a strange man who offers them an even stranger camera on the condition that they’ll act as his witnesses…

With his new camera in hand, Shinnosuke can enjoy his summer vacation in the beautiful Assou fields and mountains to the fullest. The scenery is even crawling with creatures that he would never find in Kasukabe. And there are townspeople to help and new friends to make.

That said… don’t these kids look an awful lot like the ones he knows from home?

One cool summer night, Shinnosuke witnesses a giant creature outlined against the light of a full moon. Next to the creature is a strange man with a wide smile.

And he calls himself the Evil Professor. Following this encounter more and more strange things start to happen around Assou…

Shin-chan and the Nohara Family – At the center of it all is the inexhaustible five-year-old Sinnosuke Nohara himself! Accompanying him are his dad Hiroshi, his mom Misae, his sister Himawari, and his beloved pet dog Shiro. The Noharas have traveled all the way from Kasukabe to Assou. Everything is lined up for a fun week of summer vacationing! Or at least, so it seems…

The Hinoyama Family – From left to right: Yoyoko, Lalako, Cap The Hinoyama family is hosting the Noharas while they’re in Assou. Yoyoko runs the local Hinoyama Cafe. She’s actually one Misae’s childhood friends! Lalako is Yoyoko’s younger sister, and she became quick friends with Shinnosuke. Their father, who runs the local news agency, is actually called Mamoru, but everyone just calls him Cap!

Evil Professor – The self-proclaimed “Scariest Mad Scientist of All Time.” He’s easily one of the most important characters in this entire story!

Kazuma, Kine, Masaya, and Bu – Some of the local kids that Shinnosuke meets in Assou… Why do they look exactly like his friends from Kasukabe?!

Set In Assou, Kumamoto – A town surrounded by beautiful nature. Misae’s childhood friend and many other interesting characters live here.

A Place Housing a Mysterious Legend – It seems there exists an ancient and mysterious tale known to all of the town’s people.

Filled with All Sorts of Interesting Characters – The town is filled with all sorts of unique personalities. From the local shopkeep to a girl worried about love. There’s even an eccentric professor and a real-life ninja descendant?!

A Summer Vacation Spent with Other Children – Why do these kids look exactly the same as the ones from Kasukabe?! Well, either way, you can play together and solve problems around town. Together, you’ll have the best summer vacation ever!

Gorgeous Japanese Scenery – Enjoy the feeling of Japan in the height of summer. Wander beneath the wide open skies and listen to the sound of cicadas ringing through the mountains and the gentle babbling of brooks as they wind through the greenery. It’s an experience that’ll instantly have you nostalgic for Japanese summer.

Our Secret Hideout – This town houses a secret base that only the children know about! Gather everyone to have your own Dinosaur Showdown! There’s plenty of ways to have fun in Assou!

Morning Exercise in Assou – Japanese summer vacation isn’t complete without morning gymnastics! Everyone in town gets together to do these morning stretches! Sit back and enjoy the show!

Fun Meals – The Nohara and Hinoyama families eat all their meals together. Once seated, they say their thanks for the meal and dig in! The meals look amazing, but I guess you can’t expect anything less when you’re staying at a real cafe!

Explore as You Please – Run around, play, and explore in a wide variety of places. Since it’s surrounded by nature, Assou is also home to all kinds of rare insects and fish! Catch fish and bugs, help the townspeople, and enjoy your summer holiday to the max!

Evening Bath – After a day of fun and exploration, it’s time to take a bath with dad! You can even see the starry sky from within the traditional tiled bathtub. Wash away the fatigue and ready yourself for the next day!

Picture Diary – Record all your fun experiences in the picture diary. It’s the best way to treasure your summer memories, be they the day’s happenings, new things you’ve discovered, or the types of fish and bugs you’ve caught!

Become a News Reporter – When Shinnosuke visits Cap at the News Agency, he gets appointed as a child journalist! The things he reports will be printed in the paper and pinned to the bulletin boards around town! As the newspaper pulls in more subscribers, the company will flourish! Try to hunt for the hottest scoop!

Catch Bugs – Assou’s rich surroundings are filled to the brim with insects. Some of them are even quite rare, definitely not the type you’d find back in Kasukabe! Ready your bug net, aim, and SWING! All the bugs you catch will be recorded in your Insect Encyclopedia! Catch Fish – Assou’s rivers and ponds are rich with fish, so you can enjoy a spot of fishing whenever you want! Ready your rod, reel it in at the right time, and you might just catch something rare! All the fish you catch will be recorded in your Fish Encyclopedia!

Grow Vegetables – You can grow healthy veggies over at the Kurokami Farm! If you bring the vegetables you grew to the Hinoyama Cafe or other shops around town, you can even earn a bit of pocket money.

Help the Stores – Hinoyama Cafe, the local curry restaurant, and the supermarket are always looking for more fresh ingredients. Earn pocket money by bringing them the ingredients they list on the bulletin board!

Dinosaur Showdown – Befriend the other kids in Assou and you’ll be able to duke it out in Dinosaur Showdown! It’s a place where both powerful dinosaurs and familiar characters collide! You can collect Dino Cards by buying Chocobi from the Kirishima Store!

Be a DJ – If you befriend the owner of the cafe and bar Dancing Jiro, you can become a DJ yourself! The tracks are composed of the game’s background music! Mix them up however you like and play your tracks in the store!