Well, that pretty much puts the final nail in the coffin. The first image was fake, and that would lead us to believe the images from yesterday are fake as well. Looks like Team Fake was the winner after all! Thanks to Mr. Valtor for the heads up!

UPDATE - Just incase you were wondering, the black model is also confirmed to be fake (thanks Goopay!)

So it was a 3-D render rather than a 3-D printout, impressive. And here I was thinking someone had taken the time to fabricates a physical model! Of course the real question is are the still going to be people dumb enough thinking that this thing is still real even after the reveal that it's fake?

Sadly, yes. People are stupid enough to believe anything. You will see different versions of this fake (including the one shown yesterday) until Nintendo reveals the actual controller.

you will see different versions of this fake


Funny enough you say that, after this we could have a ton of new fake rumors and images spill on to the net, and every one of them including the real deal if included will be automatically written off. Hell, Nintendo themselves could release an image of it and no one would take it seriously, at least for most people. In fact I hope they do come April 1 just so they can troll everyone.

I always doubted someone making a physical model. I don't think a 3D print would look realistic and I don't think just anyone could print out plastic, or at least convincing (for a sellable product) plastic for cheap. 3D render makes much more sense because it cuts those problems out with materials.

the second leak really was a physical model though.

I saw (after I wrote that) and stand corrected. With the way this is going, one day someone's going to make a working fake model.

Nintendo needs to let people know something about this system. Sites keep posting these rumors like they are facts.

Like Nintendo Enthusiast said... it's kind of in their interest to let the rumours/fakes run wild because it gets people talking about Nintendo up until they finally announce the thing. I mean it's heart-wrenching waiting for information and thinking everything we hear could be a possibility, but they still win out because of it.

Maybe we should just WAIT till JUNE. E3. If there is a set date already. We should all be able to wait until then.
Society needs a shake up and people need to be SHOCKED out of the I WANT IT NOW attitude IMHO. Tech has ruined us too much. LOL There used to be huge mystery to things.....I mean imagine if the NX were to be coming out 20 year ago.....nobody would know a thing about it lol

We still don't know a thing about it to be honest, lol.

Well yea, having it look like the patent was a big red flag that it was fake.

Haha, Nintendo On all over again. I gotta admit this was a quality fake. The second "leak" made me think it was real.

Without seeing it in action, I didn't believe it. If they couldn't show the other angles or a demo, there was no convincing evidence

Lmao Nin wrecked this dudes Apirl fool joke big time. In a return rage he shows off how he did it lmao...I still think its real!

The wars waged over this fake on NeoGAF makes it all the more hilarious.

The journey towards E3 is gonna be fun:

And the best part will still be Nintendo will very likely do something different and not necessarily what everyone wants.

And this is why you don't trust people claiming they've got a hot scoop on Nintendo. Considering how competently the company is run, it's no surprise there are never any leaks from them.

I wonder what trees the next fake leaker will use. This is a relief, because if this had been true, I'd be going to the store to buy a PS4.

As someone who owns a ps4 i can tell you, unless you like Street fighter its not worth it...at all

But Street Fighter V is not even that great. There are much better games on the PS4.

The PS4 has some good games. I certainly don't regret my purchases, but it's not revolutionary in any capacity. It does have a staggering focus on indie games though, which is disappointing in a way considering they cost about twice as much as they do on a PC

And even then, SF5 still isn't an exclusive.

That is correct, but the PC version is trash. You cant turn off Vsinc so its laggy as hell. (i own both versions)

If I didn't had one already I'll be hesitant do to the PS4.5 or PSK. I mean I'll like to know if it'll just be 4K output or even more tweaks to the current model. And also adding that it'll be likely the old model get a price reduction.

Well that was a fun run. Rather impressive effort, I wasn't expecting it to be a render.

What the hell was he thinking with that?

KNEW IT.
WAIT TILL E3 NOW ALL...MAYBE A TEASE OR SOMETHING AT APRILS INVESTOR BRIEFING...no? k no matter...
But yea till JUNE ...BE READY!
megatonne announcement!

I take anything like this with a giant grain of salt if it's just the one/two pictures and not a video. If you're taking a picture on your phone or whatever it is you're using then chances are you can take a video.

Much easier to fake a few shots than a video. Not to say that pictures automatically confirm something as being fake but it sways that way far more when it is just a pic. Same reason the whole Rayman in Smash swayed so far to fake for me. They did a video that had Rayman on the character select screen. Great. Why didn't they show him in action? Too hard to fake.

The funny thing is, you have the a$$holes who are screaming that Nintendo is doomed over a controller, when in fact, no other company would cause this much fervor over a controller in the first place. No one would care if Sony or Microsoft teased a new controller, but the internet was going crazy over a freaking fan render. Amazing.

Although I don't recall anyone screaming doom, Sony did cause quite a fervor with this ... 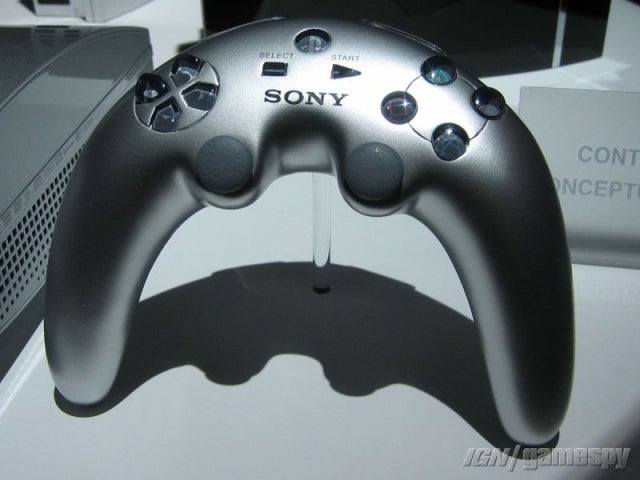 that was real though...

I remember this monstrosity. Sony's PS3 boomerang. Gawd ...put it away my hands ache just LOOKING at it. lol

PS..Just how on earth did they expect gamers to play on that thing? Holding that for 5 minutes seems like it would be a wrist wrist wrenching, finger straining carpal tunnel syndrome affair.

My goodness following that NeoGAF thread was a blast.

To genuinely complement this situation, after all the input on the GAF thread, I think there's a lot of potential in that original patent idea/form.

There was no way this thing could have been real...

Dang, and here I was gonna use my entry to go viral. Probably not so much now.
http://i.imgur.com/egGVkP9.jpg

Well thank goodness for that.

Some nice work creating these. Especially the second one

It was an entertaining ride seeing all those comments.. and tree discussion

Thank f***ing god! This hoax just gave me life though! Let that be a lesson to you Nintendo! We want real buttons!!