RIVE: Ultimate Edition launches with promised 15% Nindies@Home discount for everyone 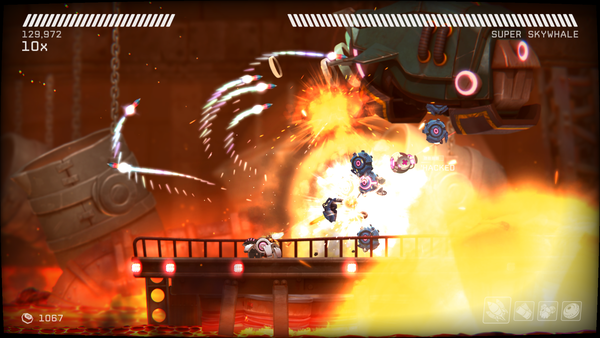 Way back in 2015, tens of thousands of Nintendo fans played the ‘Nindies@Home’ demo of RIVE on the Wii U in their living rooms, just as the E3 was happening in Los Angeles. At Two Tribes, we were then planning to release the game at the end of the year. And we promised that everyone who downloaded the demo would get a 15% discount at launch.

Fast forward to November 17th 2017 and we're launching RIVE this week on Nintendo Switch instead. It's been a long wait for fans of RIVE, but we didn’t forget about our promise. Of course, it’s hard to keep track of who downloaded the demo back then, so we chose something even better: everyone gets a 15% Nindies@Home launch discount, as long as they purchase the game within 2 weeks after launch!

Blast your way through insanely spectacular battles in this hard, fast & hilarious action game! Here are 4 reasons why this is the Ultimate Edition of RIVE:

The Copilot Mode is an exclusive new way to play together with a friend, controlling the spider tank with 2 Joy-Cons. It’s the Switch’s built-in local multiplayer in full swing!

HD Rumble is a great Switch feature, and RIVE makes full use of it. You’ll truly feel the action, with effects ranging from subtle bumps to megaton stereo shakes.

RIVE: Ultimate Edition includes full in-game achievements on Switch… And the developer has added some extra ones for good measure: 48 and counting!

Loads faster, plays smoother, tweaked to perfection! The developer has gone back in to optimize its custom game engine and tweak the entire campaign, resulting in rock solid performance and better game flow.