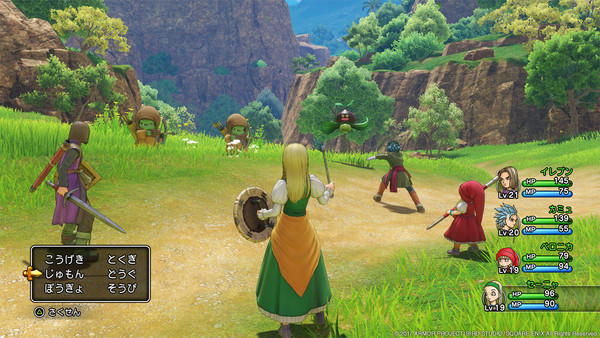 Over the past few months, fans have been clamoring for a Nintendo Switch version of Dragon Quest XI. Seeing as the game is releasing on other consoles, including the 3DS, fans have continued to beg for a Switch release. The game's director, Takeshi Uchikawa, made this official response in a Polygon interview:

When we first announced [Dragon Quest 11], the Switch hadn’t come out yet, and the development kit also wasn’t finalized. The hardware specs weren’t out yet, but we were like, "We can manage this. We can put this out on the Switch."

Producers Hokuto Okamoto and Hikari Kubota also stepped in, and they claimed that the crew was still "taking care of many things." They then asked that fans stop requesting the game and that they have nothing to announce at the moment.

We keep asking because you muppets announced the game before WE even knew what the Switch was, before it even supported Unreal Engine, and before the dev kits were finalised, and this was THREE YEARS AGO!

If anyone should have kept quiet, it's SquareEnix! Who the hell announces a game for a system before they even know what it is?

We keep asking because you muppets announced the game before WE even knew what the Switch was, before it even supported Unreal Engine, and before the dev kits were finalised, and this was THREE YEARS AGO!

If anyone should have kept quiet, it's SquareEnix! Who the hell announces a game for a system before they even know what it is?

We only ask because they're being so vague.

They won't do it until NoA pays them for it. Square rarely supports Nintendo outside money hats from Nintendo (NoA mainly).

Square wants this to go away so they can cancel the Switch version unless NoA steps up to rescue it.

Not to be a part of the conspiracy thing, but he might have been talking about NoA publishing it on the Switch in the West!

Since it's translated by them on other systems I doubt it. Maybe the 3DS version is NOA is crazy enough to waste resources on that though.

Why is it a waste of resources? It‘s a whole different game (with the same characters) on 3DS and it would be wonderful if Nintendo would be bringing the game to the West. Don‘t act as the Marketing-Guru here o.O

Not that I asked for this game, but Nintendo fans have been told repeatedly to ‘let the developer know’ if we want games since the Wii U or else they don’t get ported (sometimes not even then) so it’s kind of a natural response now.

Silly Squenix... when you tell people to not do something... they'll come back and do it twice as hard.

HAHAHA, yeah. They're just asking for it now, eh? :D

I think I'll stop sending in stories in future while Yoshiller is on duty.

Please confirm that this is a promise.

"STOP BEING EXCITED FOR OUR GAME!!!"

I'm still so annoyed that they won't localize the 3ds version.

The cynical me: OK! That's it! This game is NEVER coming to Switch!

The more calm and thinking me: Well. They could actually be working on it. It seems like they have a pretty OK relationship with Nintendo. For all we know they might announce this year.

Captain obvious me: Yeah! As others have mentioned: Why announce a game before even having a dev kit or any info on the console? Seriously, Squeenix!

But we get Octopath soon... Oh the joy!

...and another game bites the dust.

but we got the "new" all you can eat smash game...

maybe they should have called it NEW smash bros

My guess is that they are'nt even working on it. They screwed it up announcing this game to come to the 'NX', so they raised an unneccesary hype without knowing that Nintendo releases underpowered hardware in the past 3 generations and this time it was not the exception. Now, they are trying to figure out (if they are trying) how to cram this game from ps4 to switch or upscale from the 3ds version...

Yeah....F*** THAT! No way in H-E-double hockey sticks we’re shutting up now. You made your bed on this Square-Enix. BLP_Software said it best— you were the ones to announce this. Couple that with 3DS support, and you’re almost begging for backlash if you cancel. I mean, how many companies have historically reneged on an announcement? Not many. Looking at you Project CARS :/

To reneg on this now would be a slap in the face to your fan base, let alone telling them to stop talking about it. I beleive every Nintendo fan has a right to be up in arms about this...and by God, they should be!

They actually ASK people not to talk about the Switch version of this game that THEY announced and that it's obvious everybody wants.

What is your problem SE.
I absolutely can't believe what I'm reading here.

Many of you are acting like Square Enix has officially came out and told fans to stop asking about Dragon Quest XI on Switch. If you would read the interview you would see that is not what happened.

At E3, Allegra Frank from Polygon was interviewing some people from Square Enix including the director and two producers of DQ XI. Allegra asked about DQ XI on Switch and was told by one of the producers (Hokuto Okamoto) that they are still making it but can't say any more at the moment.

Allegra kept asking more about it, asking how much longer and why is it taking so long. Okamoto didn't answer the first part but gave a little answer to the second part basically saying that when they announced the game the Switch hardware wasn't finalized yet and there are a lot of things they have to do.

Allegra kept pressing for more answers about DQ XI on Switch when Okamoto, "through a translator, kindly asked me to stop asking about when Dragon Quest 11 would come to Switch as I continued to press for answers."

Sometimes you just don't have anything else you are permitted to say on a subject like this. They didn't tell fans to stop asking about DQ XI, they "kindly" asked one person to stop asking about it during an interview when they already answered all the could and the person just kept asking more and more about it.

This really just seems like nothing to get upset about to me.

This. I went to the source article as well and was surprised to have not found anything to back up the title Yoshiller gave to it.

Guess I'll take time to read the source article before posting next time. Thanks for clearing that up!

I stand corrected. You are right NintendoJungle. Shame the GN article title (and the text body too) implied otherwise. It’s easier to stomach that he was just annoyed with an overly-ambitious reporter/journalist.....but still.....they have some questions to answer. And to answer them in a more transparent way than they currently are.

Squenix is a confused company.

Some of us probably still remember reports of the inner workings at Squenix, which were rather feudal and very Japanese in some rather bad ways.

Guess we should ask about FF7 Remake instead.

"Tell us if you want a game on Switch"

"Stop telling us that you want a game on Switch"

They announce the damn thing, then don't more anything it for months and now they don't wanna people asking about it?

They want you to stop asking because it ruins the marketing for the PS4 and PC versions.
Most people will just wait for the switch version.

By the look and sound of it we should expect the Switch version to be a noticeable downgrade. Which is ok for me. I will go for the PC version since it will be cheaper and run with a jillion FPS.

Don't tell me what to do, SE. DQ has never been my cup of tea, but now I'm gonna ask for it incessantly

"Nintendo fans don't buy anything but Nintendo games on the platform! If they really, really want us to put in the effort, tell us!"

The real thinking for third parties is like this: "We hate working with Nintendo as a company due to their practices, their systems are underpowered and we just want straight ports across all platforms, and Nintendo fans have the audacity to buy quality rather than slurp up a bad port or an "exclusive" that is bad."

There's a difference between pressing for answers and being just annoying. The polygon interviewer was just annoying. I would imagine Polygon will have difficulty getting access next time because of this or at the very least that person won't be allowed to interview.

Other than that, it kind of lines up what Reggie is saying about 3rd parties. He expects games to start coming to the Switch by the 1st of next year as 3rd parties will have had more time with the system. Game development is taking 3-4 years to complete on average.