Nintendo to add in Nintendo Labo support to other Switch games 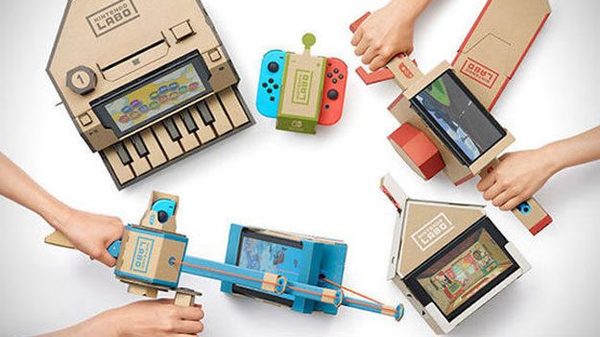 Mario Kart 8 Deluxe is the first game outside of Nintendo Labo software to receive Toy-Con support, and more titles will be compatible with Nintendo Labo in the future.

Nintendo doesn't mention what other games are getting Nintendo Labo functionality, but we can definitely sift through what they've released and see what would be a good fit!

Why always so pessimistic? Why can't anything that comes out please you in any way shape or form?
Why can't you accept that the company considers it a success in some capacity at least, when we all know they just silently kill failures? How does this bother you in any way since it's not being forced on you? It's not like Metroid Prime 4/Yoshi is gonna require Labo instead of a Pro Controller.

How and why does every single thing that comes out bother you or anger you in some capacity?

Probably because sales were pretty underwhelming so this is is a part of their plan to increase sales going into the holidays, plus, it might also get more people to buy older games (younger kids).

Underwhelming as in it was actually an objective failure?

Or Pokémon Go type underwhelming where it’s not the top app all year round on every digital storefront and is only making 1 million USD a day?

I never once said it was a failure. I meant that it was underwhelming, not that it wasn't meeting expectations. Nintendo expected sales to be underwhelming, compared to traditional game sales, They expect it to sell more as time goes on, and this is likely one of the ways they plan to do that. If it sold like games normally do, probably would not have met expectations, which is why sales are underwhelming, especially in Japan. But that doesn't mean it is a failure.

This is something they said they would do from the very start.

Underwhelming according to who, and how?

People’s selective ideas as to what is or isn’t a failure when they have no idea what Nintendo’s expectations are is always fascinating. 1-2 Switch has quietly sold 2 million copies in the face of being derided by everybody. Did anyone call it a failure when it came out the gate selling 89,000? Labo has done several times that already, and at higher price points. Nintendo can easily play the long game with this.

I can see Yoshi Switch supporting Labo when it comes out next year.

This is a great development. I'm stoked to try it out, and to see what else they cook up. Handlebar acceleration is going to be so fun! I am sure my oldest son will get a kick out of this.

this better mean labo man is confirmed for smash

I want Iwata for Smash. At least as an assist trophy.

Way to go Labo! Keep adding more things to things. I love it.

Maybe the house could be used for a new Tomodachi Life or Animal Crossing or something.

The rubbish some people come out with. You can't say Labo is a success, Nintendo certainly haven't, because it hasn't. Just look at the charts, look at the sales numbers. So Nintendo have framed it by saying Labo sales have met their "expectations". But in reality it hasn't. They had 500,000 kits in Japan for its first week, it still hasn't sold through anywhere near that initial shipment. Look at other charts, it was gone after a few weeks. You've to look way down the Switch specific chart to find Labo, and that's just the variety kit. The Robot kit most definitely has been a failure. We all know full well Nintendo would have had PR statements put out bragging if Labo had been a success.

I see this announcement as Nintendo trying to rescue a floundering initiative. The one game where I could see them trying to incorporate Labo is the new Yoshi game. It could be why the game has been delayed. I hope they're not tainting this game as I'm really looking forward to it. I hate when any game has amiibo functionality. It's just a means for them to try and extort more money. I just want to play games, I don't want or need any tacked on crap.

Why always so pessimistic? Why can't anything that comes out please you in any way shape or form?
Why can't you accept that the company considers it a success in some capacity at least, when we all know they just silently kill failures? How does this bother you in any way since it's not being forced on you? It's not like Metroid Prime 4/Yoshi is gonna require Labo instead of a Pro Controller.

How and why does every single thing that comes out bother you or anger you in some capacity?

But seriously, I find this to be a good idea. It's like not a must, but can be fun for some. I know I would try this in Mario Kart. Labo is creative in it's core and even if I'm 38 (soon) I am thinking trying this out.

I mean I won't lie. If MP4 used LABO in a mandatory way I'd be disappointed BUT the backlash that would follow would be too hilarious to pass up. It would be Federation Force and Other M all over again. lol

Oh this would be way worse than those two combined. But damn I would have good laugh

But hey! They could add an extra Labo mode for the fun of it.

Oh my God, can you imagine how people would react if it was mandatory??? Just thinking about it is making me chuckle!

The entire internet would implode. Hehe

I see that the same people who were critical on Labo are changing their Labo goals:

Labo launch: See Labo is a failure it dropped out of charts early after the first month!!!

Nintendo says Labo has met expectations and expects it to grow for holidays: Nintendo is lying, how can anyone call Labo a success!!!!

Why can't people just ignore it if they don't like it? I don't have any interest in Labo, but its nice to see that something new and unique is doing good numbers for Nintendo. It is not affecting any of their ongoing projects, and Nintendo has specifically targeted for kids (and kids at heart).

Fanboys tend to become entitled. "I've been a fan for (x) years/spent so much money on (y) products/been thoroughly dedicated to (z) therefore (company) must cater to ME!"
A lot of people are shocked and outright offended that their company of choice even dares to cater to people that aren't them.

That just made them sound like spoiled, little princesses. Which was kinda funny.

My 10 year olds have loved putting the Labo together and I've enjoyed supervising and watching their faces.

I'm so glad Nintendo isn't so narrow minded as to only make games for crusty old gamers.

Nintendo was clear the age group that Labo was for, and I've seen nothing but wonder and amazement from that age group.

I love that Nintendo is inclusive. It is a great example that the rest of the "if it's not for me it's crap" gaming industry and fans should emulate.

It's great to hear your 10yo enjoyed it so much, my children are too young but I look forward to getting this for us when they're a bit older!

CYRUSZUO said:
I love that Nintendo is inclusive.

Couldn't agree with this more, the last thing I want is for Nintendo to be doing the exact same things as everybody else!