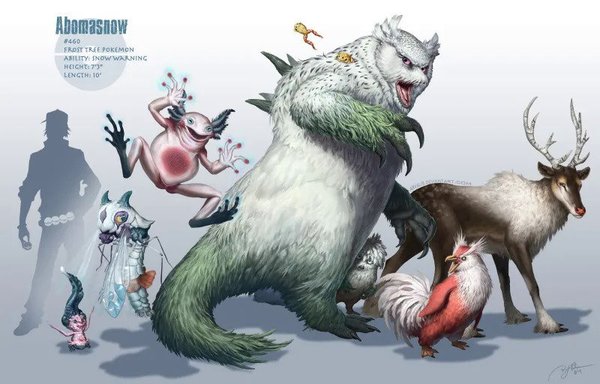 RJ Palmer created a series of realistic Pokemon art pieces a number of years ago, and they became quite the talk of the internet.
His art ended up reaching far and wide, turning RJ into an overnight sensation. Turns out his decision to create that art series would end up landing him a major job years later.

RJ has confirmed that he's indeed part of the Detective Pikachu film production team. He was snatched up for a position on the project when the film’s production designer searched “realistic Pokemon” on Google and found RJ's work. RJ worked roughly seven months on the movie, and was involved with a number of Pokemon designs.

I’ve known him for a long time! I want to congratulate him!

Great! Go and do it!

It isn't... just like Froslass isn't a mosquito... this guy takes some major liberties when it comes to making "realistic" Pokemon...

That artwork was the first thing that I thought of when I first saw the trailer but I was also shocked that they stayed so close to the original designs and didn't try to reinvent the wheel in that regard. The designs are so iconic that you can't do much with them without a lot of outcry and the reception probably wouldn't have been as positive if they did a lot to change them.

Well that makes sense… I mean it kind of looked like it.

I’m not sure the asthetic works for me but kudos to the artist. It must be a great experience and opportunity.

Well this explains why they all looks slightly off then.

That's honestly fantastic. Major props to him! I thought it looked an awful lot like the realistic Pokémon art I saw on the internet.