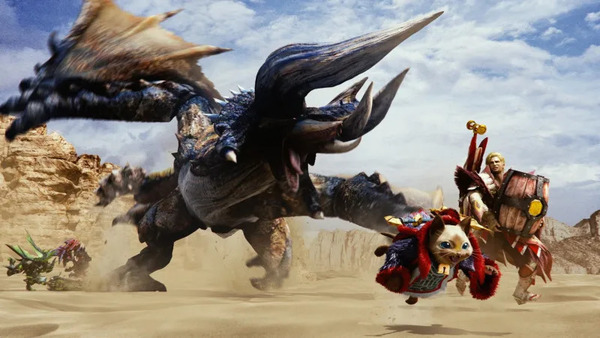 Last week, we found out that Monster Hunter Generations Ultimate sold over 1.2 million units on Switch. Fans were really impressed to see the game hit that total, as it's just a port of a previous game, and Capcom did little-to-no promotion for it. Could you imagine what would happen if Capcom actually created a new Monster Hunter game for Switch and advertised it? Rumor has it we won't have to imagine it for much longer.

Various sources are coming out of the woodwork to spread rumor of a new Monster Hunter game coming to Switch. Apparently the title could be revealed sometime next month, if all goes according to plan.

With how big the Monster Hunter franchise is right now, revealing a new title for Switch could be quite a momentous occasion. Let's hope this rumor ends up being spot-on.

Technically the Switch version was not just a direct port, but included brand new content (G-rank) as Ultimate versions typically do.

MHXX was first released for the 3DS in Japan before the Switch version of the same game was made, so it's still a port even if we didn't get that one.

It was the best game for Monster Hunter that year and Capcom knew it, course it sold amazingly.

My guess is that they're bringing Monster Hunter Stories or Stories 2 to Switch.

wow don't play with my heart like that. I'd love this too much to comprehend. and a brand new MH title as well, but man.. I doubt it's Stories because Nintendo handled the localization and not Capcom, but omg would I still kill for it.

Stories is completely playable on Mobile Platforms though

3DS got new MH games, so why not Switch? It would be nice to see the Switch get a new game, instead of ports. Maybe this will be the second game in Europe from Capcom to get a proper physical release on cartridge.

Very very excited about this one in particular. A game that fuses World and Generations from a mechanics and systems standpoint sounds like heaven. Hell, even the step after World should be very worthwhile.

Very interested to see what their plans are for this. I know some people want a Switch MH game to be a continuation of pre-World MH, which I understand to an extent as my favourite MH games were 3U and 4U, but I think it would be dumb to not incorporate a lot of the thoughtful changes that World added to the series, even if a lot of aspects of World's overall game design don't really make sense for a portable system where you want to be able to pick-up-and-play. Very excited to learn more - assuming this is accurate, but I don't see much reason to doubt it.

I expect to be disappointed, because it's Capcom, and they're always screwing Nintendo over in some fashion.

Knew it was coming eventually. The exact same rumor that predicted World predicted a new portable version for Switch.

Capcom wasn't going to leave that money on the table.

Excited to see how this turns out. I'm one of the people who likes the old mechanics, but some World qol improvements might be cool.

Could you imagine what would happen if Capcom actually created a new Monster Hunter game for Switch and advertised it?

No. And neither can Capcom. At least outside Japan. That's a luxury reserved for other consoles.

Of course Capcom will put a new Monster Hunter on the system that sells best in Japan. And of course they have already started working on it.

Will it be an actual game that actually utilizes the Switch hardware is the question...

My money is on a streaming version of MHW.

Having played both I really hope this hypoethical Switch game is more like GU than like World. (>_>)

Spoiler
Still getting Frostborne or whatever the heck it's called though.