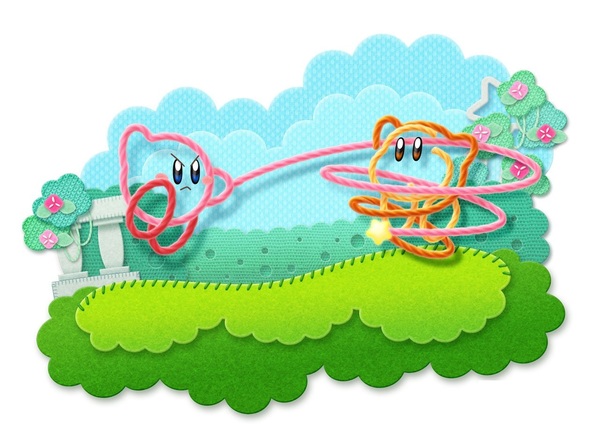 Kirby's Epic Yarn made a lot of big changes to the Kirby series, with one of hte biggest relating to Kirby being unable to inhale enemies. Kirby's Extra Epic Yarn adds in some new tweaks to the 2010 Wii title, but retains the decision to remove Kirby's staple ability. Why did Nintendo decide to remove the inhale ability in the first place, and then replace it with a yarn whip? Kirby producer Etsunobu Ebisu explains in a Kotaku interview.

- making Kirby out of yarn “means outlining the character with yarn, so the stomach would be hollow"
- if Kirby inhaled enemies, this would mean the "enemies would just fall out after”

“When discussing designs for a new action game, we often start with the player’s abilities, but for this project we took a different direction and started to discuss and pitch ideas from the structural and environmental perspective. From there, we figured out how the world would play by going over things like what the world would be like if it was made of yarn, how that would differ from a normal world, and whether there’s anything that can be done only because of the yarn.

In response, we created the basic ‘pulling’ ability for the yarn characters. We thought that this would fit the game, so we consulted with HAL Laboratory about Kirby’s ability in this game being to pull, rather than inhaling. HAL Laboratory understood that the hollow stomach meant air would just leak out even if inhaled, and kindly accepted our proposal.”

That's very unusual for Nintendo. They usually come up with the gameplay idea first and then create characters and a style that work around that.

This was supposed to be a new original IP named Prince of Fluff by Good-Feel, with Prince Fluff as the titular character. Nintendo felt it would not do well in the market, so they opted to let them use the Kirby IP instead for visibility. They may have genuine reasons for not including his iconic inhaling ability, but let's not pretend this was done in good faith. The fact of the matter was that they wanted something that would guarantee sales, and slapping Kirby over the original concept meant having to make up an excuse on how the gameplay would work within the context of that series. It's also why Prince Fluff is just some random guy tagging along with Kirby in co-op. Hell, they don't even have the co-op mode included anymore in the 3DS port. Then again, with Wario Land: Shake It! being an expensive flop for their first outing one could see why they weren't so keen in letting them do something new and potentially risky. Now they're taking good care of Yoshi instead of Arzest, so that has to count for something at the very least...

This is Hal and not Nintendo?

Also, there have been games where Kirby doesn't have inhale like Mass Attack.