The history of Konami in multiple collections
by rawmeatcowboy
20 March 2019
GoNintendoGN Version 5.0 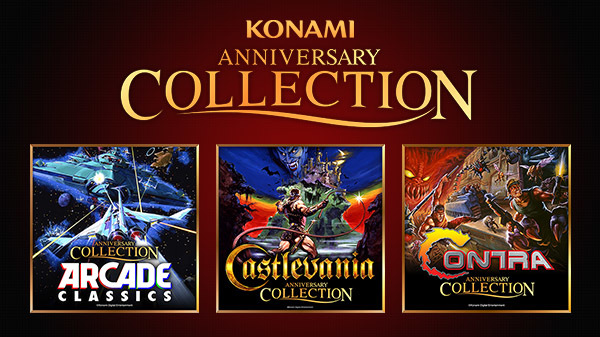 Dive back into the action!

In celebration with the 50th anniversary since Konami was founded, this Anniversary Collection series highlights many of the iconic arcade games and classic console titles that have been loved by fans throughout the years, and are made available on many of the latest platforms. From the shooters to action, these collections are packed with beloved titles that are simple to play and yet addicting to the core.

Konami welcomes everyone, from those who were glued to their CRT TVs or the arcade machines back in the day to first-time players, to enjoy a part of our history. All collections will be digital-exclusive and can be downloaded from the various online stores. We give our utmost gratitude to each and every fan from all over the world for playing our games throughout the years!

It all began here…

Konami starts its 50th anniversary celebration with this first installment of the Anniversary Collection series of the all-time classics!

This collection includes 8 arcade masterpieces of the 80s, from Nemesis to Haunted Castle. Experience these Konami classics in all their retro glory, now enhanced with modern features.

Bonus Book – Also includes a bonus eBook packed with new information about the titles, including interviews with the development staff, behind-the-scenes insights, and sketches and design documents never before revealed to the public!

Classics that defined the Castlevania series.

The first Konami Castlevania Collection is designed to be a completed collection around the origins of the historic franchise.

Included is a unique eBook that has details provided by developers, artists and other inspired by the Castlevania legacy.

Released as part of the Konami 50th Anniversary celebration, now the best time to relive these timeless classics that helped define the platformer genre.

The originator of the run-and-gun genre.

The Contra Anniversary Collection brings this classic Run and Gun franchise back to modern platforms and a new generation of gamers.

Grab power ups and blast your way through waves of menacing enemies and bosses that will put your gamer reaction skills to the test.

Alone or with a friend, Contra provides hours of nail biting action. In a pinch; make sure you know the code!

Oh man, these seem like they could be some really fun collections. I can't wait to see what other games are hiding in these collections!

Thanks to Kolma for the heads up!
[Link]