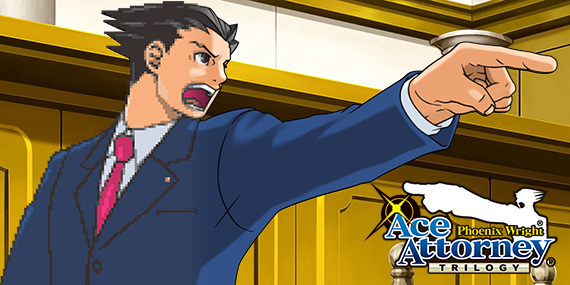 The latest Capcom dev blog on Phoenix Wright: Ace Attorney Trilogy takes a look at how the graphics were revamped for this version of the game. Check out a blurb from the blog below.

A lot of you probably already know this, but the graphics for this game were scaled up from the original 2001 Game Boy Advance game. (Note: The first Ace Attorney games appeared in 2001 on the Game Boy Advance in Japan before their worldwide debut on the Nintendo DS in 2005.) The resolution of the assets back then were 240 pixels x 160 pixels, and it was our job to turn them into beautiful 1920 x 1080 HD graphics. That’s 54 times bigger! But we couldn’t just make the graphics themselves 54 times bigger and expect them to look good. Plus, if you look really carefully, you’ll see that the screen ratio is slightly different... but we on the multi-platform port team were ready and willing to rise to the challenge.

Let’s take Phoenix as an example. He’s onscreen quite a bit, so we really reworked his sprites. Using the original illustrations and games as a reference, we worked to capture the essence of each and every curve and detail. We drew and re-drew each frame of animation until we ended up with stunning sprites like this one. Amazing, isn’t it!