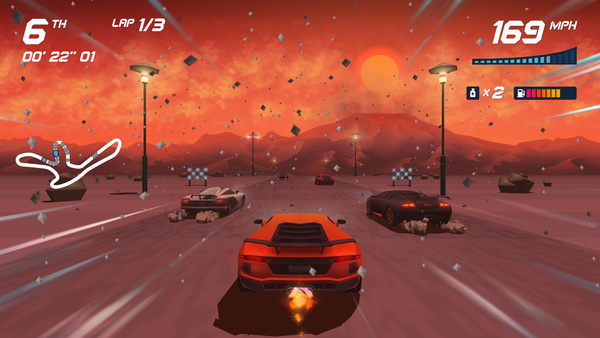 Porto Alegre, Brazil, May 7, 2019 — The road up here was full of thrill and achievements, as expected.

Horizon Chase Turbo aimed for the horizon and hit right in the heart of retro racers. The game reinvented itself and got an overwhelming amount of good reviews, awards and achievements.

But let's stop looking in the rearview mirror. Let's start talking about the next horizons we'll chase. Thinking about the growing community of players, our Dev Team prepared lots of new stuff for the second half of 2019.

In addition to be the fastest, win and lead the ranking, now players have another good reason to check into our Playground Mode: get exclusive prizes. Collecting coins in a new scoring system they will gain access to new skins in special seasons.

Horizon Chase Turbo already brings hours and hours of fun and speed, but for the hardcore retroracers it's never enough. Thinking of them, we are working on new DLCs with new cars, new campaigns and more.

When it comes to designing upgrades, granting fun for the gamer always gets the pole position. Our team analyzes players behavior within the game and their thoughts on social media. Thus we get insights for new ideas and upgrades. There are surprises right ahead, you can count on it!

Our hint for Horizon Chasers: keep an eye on the road and other in our channels. One thing is clear for everyone, this game is always full of new horizons.

“We created Horizon Chase Turbo to be the racing game we wanted to play, hitting the sweet spot between true-to-life simulators and chaotic, explosive kart racers,” said Aquiris Studio Game Designer, Felipe Dal Molin. “With Horizon Chase Turbo, we want players to feel the nostalgic tension of the simple tug-of-war of a tight turn; where players are run off-road for a split second only to return to intense high-speed action as they overtake and battle against friends playing together on the couch or via the online ghost mode.”

Aside from the modernly retro graphics, the split-screen couch multiplayer modes are among Turbo’s most defining features. All game modes, including the World Tour campaign, tournament and endurance challenges support local split screen multiplayer up to four players. Racers can compete in head-to-head races one at a time, or spend hours racing around the globe collecting coins to achieve the common goal of unlocking exotic vehicles and spinetingling tracks.

Looking forward to the physical release.