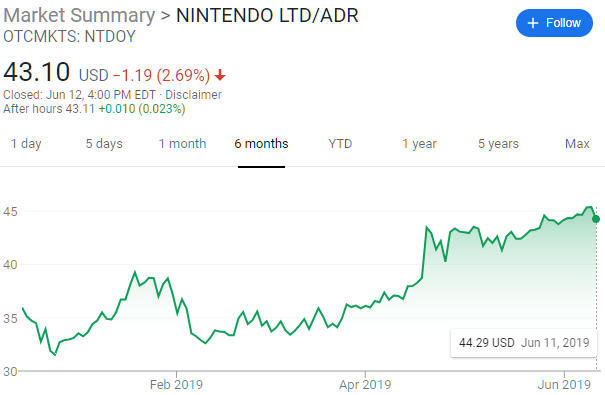 Investors will never, ever make sense to me. It seems the happier fans are, the less investors are pleased. Case in point, yesterday's Nintendo Direct. While fans were certainly pleased with what went down, investors were not, and it caused a notable drop in Nintendo's stock the following day, tumbling 3.53% overall.

What were the reasons for Nintendo's stock drop? Most pointed to the delay of Animal Crossing: New Horizons, which definitely stung fans as well. Going further, investors also wanted to hear about cloud-based tech from Nintendo, as well as the rumored Switch redesign, and were hoping for a 'major collaboration' with Microsoft. Like I said, the Animal Crossing stuff I get. The other stuff? It's almost like these investors don't pay attention to Nintendo!

I know I'm gonna get flack for this but in my country we call these people idiots.

Investors: Why isn't Nintendo chasing trends and one-trick ponies. Why don't they crunch their employees to release that game this year, skipping the holidays is a huge mistake. Blablabmoneymoney.

The only thing I care about out of the possible reasons for the stock price drop, is a Switch redesign. And a more powerful redesign, not some Lite version.

As an investor who is actually a gamer, It makes no sense to me either. EA is the stock they need to go with if they want yearly iterative games and lootboxes that ultimately pad revenue and profit. That ain't Nintendo.

Nintendo is more arthouse and fine-crafter than mass-producer profit chaser like some other gaming companies. Think of it as a fine furniture maker that creates pieces that appreciate in value over time vs. Ikea.

I also bought Nintendo stock when it was $11/unit, so I'm good no matter what unless it just totally craters.

Why can’t the fans understand of waiting longer? That’s what I don’t understand.

The fans do understand, there have been very few complaints. The problem is most investors aren't fans. They are here to buy and try to make a profit on that investment as quickly as possible. They are worried about short term lost potential sales from this holiday, as supposed to the long term ramifications on the company of releasing a game like AC too early.

Ugh! These people! They’re just as bad as Politicians Brawlout

"We don't even know how viable cloud gaming is yet, but everybody's talking about it so WE WANT IT!"

Cloud gaming is already being tested by Sega and Capcom on the Switch in Japan. Let's see how that goes before we start committing to huge cloud-based systems. I have a feeling that technology and internet connections need to advance a bit before it's a widely viable option.

SEGA was an MMO so thats somewhat different.

Capcom on the other hand has had a whole year to announce other cloud games for Switch, and has made no moves to . I'd say its pretty safe to say it didn't do very well, Japan is surprisingly not a huge market for game streaming, Nintendo is even struggling to increase digital sales in Japan. So that should be evidence that maybe that form of cloud streaming, to Switch, has no viability (which should have been obvious from the beginning)

I know I'm gonna get flack for this but in my country we call these people idiots.

Honestly not surprised they are peeved with animal crossing being delayed. That's a huge seller missed. It will still hit this fiscal year, but they were wanting to to sell Switch's through the holiday. Nintendo surely knew at their last briefing that Animal Crossing wasn't a calendar 2019 title.

"NINTENDO. ANNOUNCE SOMETHING YOU LIKELY BARELY HAVE IN R&D BECAUSE WE DONT UNDERSTAND THE INDUSTRY"

Like... not only is cloud not quite ready to have an impact, see even Microsoft barely talking about it this E3, but also, lets assume Nintendo does use Azure, that R&D likely has just started. Also, of all the companies, Nintendo has the least reason to do cloud ATM. They have cheap hardware with guaranteed, non-cellular, portability. They can wait a bit longer than Sony and Microsoft. Have the option eventually, but absolutely not now.

As for the hardware investors were told by Furukawa directly it wouldn't be happening at E3. Nintendo investors are really bad at understanding Nintendo arent they...

I do hope that nintendo ignore the push for cloud gaming, i really wish one of the big 3 would avoid that, and seriously, i hope that cloud gaming in general fails, since it has more cons than pros for the consumer.

Like Pokemon S/S won't sell any units at all this holiday...

Oh and Nintendo did indeed say this E3 was all about software, not hardware.

I'll agree with Drew here: They are idiots!

My question: Why do any of you care? Does the stock price have an impact on fun you have with your games? Is being a Nintendo cheerleader that important?

Everyone here bummed out that animal crossing is delayed to next year...what a surprise.