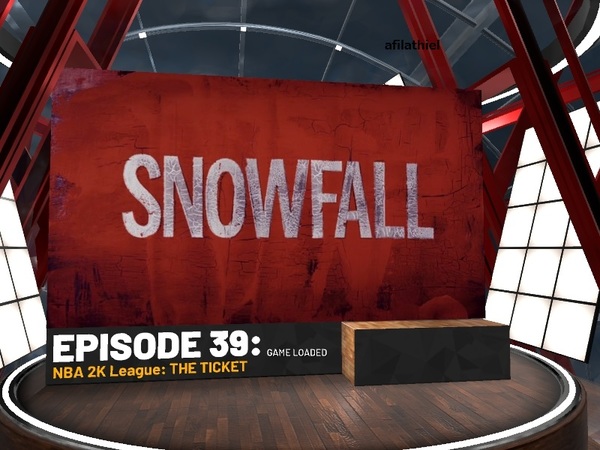 An insane deal was recently running on NBA 2K19, which saw the game's priced dropped down to $4. Obviously tons of players jumped in on the deal, as indicated by the game's #1 spot on the weekly Switch charts. Wondering how Take-Two can afford to slash the price so low for a limited time? It looks like we might have found out one possible answer.

Players over on Reddit have noticed that NBA 2K19 is now forcing players to sit through advertisements before some games start. You can't hit the courts until you watch an ad for whatever the server deems appropriate. People complain about microtransactions and loot boxes, and rightfully so, but seeing something like this is next-level. We'll try to get comment from Take-Two on this matter.

I would be more mad if I didn't get the game on that deal.

Good, screw ads because they suck.

I'd never play a game that forces me to watch ads instead of playing. If Nintendo would ever do this with a Zelda game, that would be the first Zelda game I'd skip.

A quick Google search shows threads complaining about this as far back as January, and the game was selling for far more than $4 at that time...

I'm guessing the people who bought this recently because of how cheap it was are just finding out about this.

Does the same happen in other systems (PS4/Xone)?

Regardless of whether or not the ads can be turned off, you paid money for the game. They should not be allowed to make the game worse. If they need more money, they can make quality DLC that people would actually want.

I’m ok with ads if they make sense in the game. For instance, ads on the sidelines like you’d see in real sporting events. Makes it seem more like real life. Something that amounts to a pop up ad though? That’s bull shovel.

Pikmin 2 has product placement that actually improved the game, IMO. But I’ve talked to people who strongly disagree - they don’t like ads of any kind, even in Pikmin 2.

I find that any of that stuff takes me out of the experience.

Just out of curiosity, how do you fee about product placement in movies? If you see inside a character’s fridge does it bother you to see cokes, or would you prefer a made-up brand?

In a live-action movie, it's something you're used to seeing anyway, so I don't mind as much unless they make it super obvious or it doesn't fit. If it was an animated movie it would really stand out I still don't like the idea of paying for something and then still getting ads shoved down your throat.

I legitimately don’t understand why live action would be different than animated. One pays to see both, right? Not that it really matters, your feelings are your feelings, I just think the point of view is interesting.

Morally, I don't think it's right in live action or animated. I just am less likely to notice that it's there in live.

Isn't this what Sony wanted to normalize?

I wonder what Nintendo has to say about this issue.
Probably, they would say something like "Every publisher may do their own thing", but I wish Nintendo would prohibit ads like these.

I wonder how this sits with the notoriously strict Australian review board that just recently had issue with Katana Zero featuring the term drug in game. I'd imagine a commercial featuring such content would immediately have their chins and fingers wagging.
Honestly this is a scumbag move by take2 and certainly will put me off purchasing the next one in the series and lets face it there are already so many reasons not buy the next such as take2 cheaping out and not using a full cart size.
This new ad situation is akin to browser extensions changing hands or developers suddenly inserting ads or malware without warning. NOPE! I would go so far as to say that Nintendo should pull the game from the eshop and tow take2 into line.

I'd also like to know why we can't have patch notes available to us within the switch prior to said updates. This is a prime example why accessible change logs are needed.

Hadn’t heard that about Katana Zero, but that’s funny. Does the AU board think that Australian teens are all proper? Most of what I see on social media is them getting wasted every weekend, smoking weed, etc. Of course, it depends on what social scene you’re looking at, so I don’t want to generalize.

Lol. yeah, the Australian review board is probably made up of your typical triple chin mothers, white knights and traditionally bad parents on the other end of the spectrum. Armed with with the law of opinion and righteous indignation, they manage to have all but a few things pass through.
hahaha, that's okay I have that same view of the general public also. You also forgot to mention the goon bag. :D

Yes, goon bags! 😂 But I don’t mean it in a bad way. Aussies coming of age are no different than others in the world. Lots of parties, drinking, drugs, and sex. Just part of growing up, I reckon. That parents are oblivious to it happening is weird. Of course, I guess there’s the standpoint that it’s already so prevalent that something should be done. I just don’t think censoring video games is the way to achieve that goal.