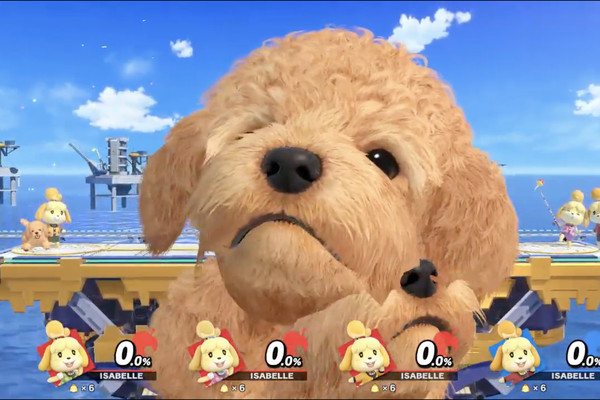 An upcoming Smash Bros. tournament is going to be adding in therapy dogs for players to utilize. These dogs will be on-hand for players to spend some time with both before and after their tournament action in order to ease any anxiety they have. All together, there will be 5 different dogs on-hand providing some escape for nervous players.

I'm down with Smash Bros. tournaments in general, but throw some dogs in there, and it turns into must-attend event to me!

Wow, what an absolutely brilliant idea...lol

i loved this idea this will help the conpetitors have a better performance in this tournament, bravo for the responsible who have this bright idea to use dogs to help them in they perfonmance anxiety, for the next year of this tournament they should use also cats.

I'd definitely be on board with this. Going into a tournament, not just for Smash Bros. but for anything, can be rather intimidating, as the air is so serious it can get suffocating. For instance, I know people who are better at pinball than me but refuse to participate in pinball tournaments because of that serious air (despite competitive pinball being a lot less serious than competitive Smash Bros.).

The main thing I hope is that the dogs don't get abused or any behind people's backs.

me too if this idea is a sucess other animals like cats can be used.

Speaking of suffocating I do worry about serious animal allergies, hopefully they get non shedding dogs. Definitely a great idea though

Yeah, as someone with severe animal allergies, I hate this. Let this little idiots learn to deal with a loss.

I hope the dogs are treated well by all involved.

Aren't Smash Bros tournament usually full of angry preteens that throw controllers around when they lose?

Hope that aside from the dogs, they also provide 1 John Wick per venue, just in case any of the participants decide to vent their frustrations on any of the dogs.

I guess this idea is fine so long as those who have anxiety issues associated with dogs don't have to be anywhere near them. I get nervous just thinking about having to go to a public place or store where someone may have an emotional support dog. Don't get me wrong, I understand that I'm in the minority, I just feel like I have fewer options when it comes to managing my anxieties (i.e. there is no animal or item I can bring with me to a public space to mitigate my issues with crowds and dogs whereas those with social anxiety issues can bring along their emotional support dog in order to cope)

Switch owners in China are not happy with how things have been going since launch
Feb 26, 21:18 by sikes primero Feb 26, 19:29 by fylo
WORLD OF HORROR dev says it's "too early to tell" if there will be physical Switch version
Feb 26, 20:12 by sikes primero
Platinum's new Tokyo studio will be working on Project G.G.
Feb 26, 18:49 by ejadaddy
3DS celebrates its 9th anniversary
Feb 26, 18:49 by ummbelievable
Platinum reveals "Project GG," which is targeted for all existing platforms, also teases other projects, including a huge secret
Feb 26, 18:34 by enthropy