The Dark Crystal: Age of Resistance Tactics' publisher, developer, and Netflix all discuss their working relationship,

Netflix gets serious about games
23 August, 2019 by rawmeatcowboy | Comments: 1 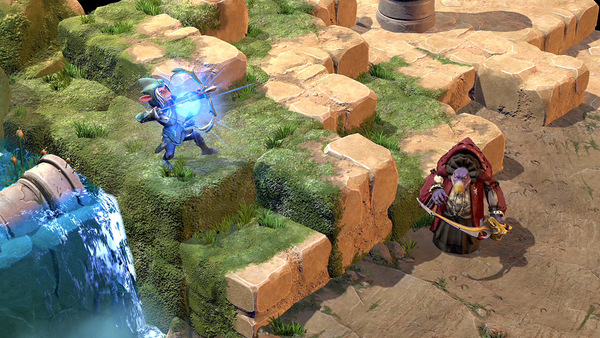 The Dark Crystal: Age of Resistance Tactics is coming out on Switch later this year, and its Netflix's next big foray into releasing games for consoles. Stepping in to handle publish the title is En Masse Entertainment, and in an interview with Engadget, En Masse's product manager David Whitfield discusses how this game should be right up the alley of Fire Emblem fans.

"In terms of Tactics, I think it's one more step toward a more traditional, more hardcore genre game. So someone that's a big fan of Final Fantasy Tactics, Fire Emblem, it will really appease that audience."

Obviously there are a lot of moving parts to bring a project like this together, and not just with the game's development. En Masse director of live services Stefan Ramirez talks a bit about everyone coming together to make this game happen.

"I think Netflix has been an excellent partner. There's definitely a working relationship we have to keep in mind. Like the IP holder for the Dark Crystal: Age of Resistance, and then there's also the Jim Henson Company, and then BonusXP. Luckily, we all work together really well, but there are some approvals and things like that, that we have to make sure we're synced on."

While Netflix isn't doing any of the heavy lifting in development, they are certainly involved with making sure the project moves along smoothly. Chris Lee, director of interactive games for Netflix, explains the situation.

"We sit down with the game development studio and we partner with people we think are really talented and who can do amazing work, so our goal isn't to then box them to say, the game's gotta look like this. It's to say, we're working with you because of what you can do. Looking at this source material, how do we bring this to life in the right way? You gotta get them right. There's never a moment where you step back and let it go, being there to help reinforce the authenticity."

The developer on this title is BonusXP, who also handled Stranger Things 3: The Game. BonusXP president Dave Pottinger looks back on that collaboration, detailing the insane level of secrecy that was put into it.

"We have paper covering our office windows, nobody's allowed into our office, it's like five NDAs to have a contractor work on the project, and that level of secrecy, we weren't really used to. We're used to getting the game to beta and having anybody that we can come and play it, and of course that's not possible on this project."

It’s so crazy that there’s two Netflix games on or coming to Switch, and no Netflix app