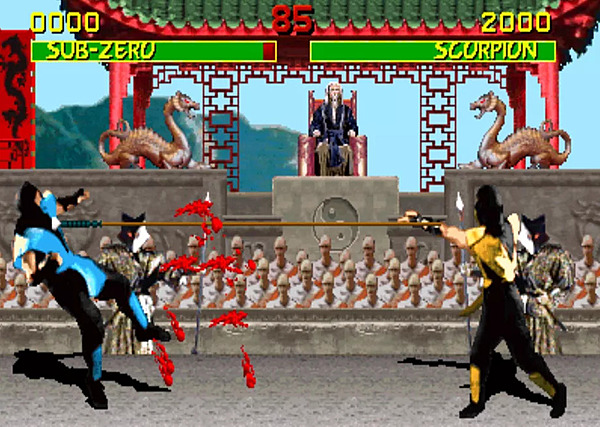 Back in the early 90s, Street Fighter II was the king of the arcades. It was the fighting game everyone was pumping quarters into. How on earth do you create a game in the same genre that can compete? According to a Polygon interview with John Tobias, co-creator of Mortal Kombat, you focus on being the anti-Street Fighter.

“From the game’s inception we knew that it would not be a clone. If we looked at Street Fighter, it was to study how not to do something in Mortal Kombat. I remember we just sort of conceded to the raw look of digitized footage. I think that was the right choice because it went a long way in making sure that our game would stand-out visually from Street Fighter 2.

“I also think that the time we spent developing the characters and story, which was an odd thing to do in an arcade product, helped build a larger world in the minds of our players. That impact lives with MK even in its most recent iterations. Of course, our brand of violence is in large part what gave us a seat at pop culture’s table.”

That's actually a very smart move to do, at least as long as the things they choose to distance themselves from Street Fighter II become a coherent whole, which Mortal Kombat definitely was.

This has long been Warner Bros.' strategy to survive in the same industries as Disney, for example. It's also how Southwest Airlines became a giant in the 2000's when most of its competition was hemorrhaging money and many had gone out of business.

Nintendo of America releases statement on the tragic death of George Floyd
Jun 03, 16:29 by terribledeli Jun 03, 15:30 by jar Jun 03, 15:26 by seansneachta
Harry Potter meets Professor Layton in the puzzle mystery adventure "The Academy: The First Riddle," hitting Switch this Summer
Jun 03, 15:57 by storabajskorven
Mortal Kombat 11: Aftermath Kollection's physical release won't have any game card at all
Jun 03, 15:55 by mereel
Yet more speculation of Epic Mickey's return bubbles up, thanks to another new piece of apparel
Jun 03, 15:22 by hammergalladebro