Not just a straight port
14 September, 2019 by rawmeatcowboy | Comments: 1 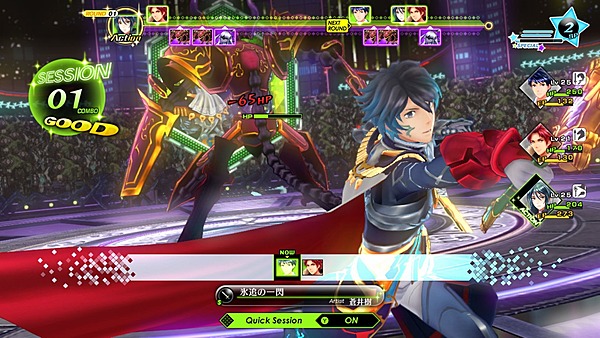 Looking for new info on Tokyo Mirage Sessions #FE Encore? Nintendo has opened a page that details some of the changes and added content for the game. You can check out all the details below, and check out more screens here.

Fights are done with Mirages like Chrom by your side, and they are essential weapons to defeating your enemies. By attacking enemy weaknesses, Sessions are started where your other party members will follow up with attacks. Apart from elemental attacks, there is also the Fire Emblem series’ weapon triangle, and as such it’s a must to keep track of enemy weaknesses.

For example, in the above screenshots Kiria starts off with an ice element attack, which is followed by Itsuki’s ice-element Session skill, then followed up by Touma’s sword-type skill.

Even with an invasion of Mirages, the other side to Tokyo Mirage Sessions is watching our crew try to fulfill their entertainment industry dreams, including singing, live concerts, appearing in dramas and performances, in order to reach the top.

The Nintendo Switch version is adding in new content, such as a new song, new outfits, as well as more story content, including a new dungeon. Additionally, Maiko, Barry, and Tiki will also participate in battles, helping extend Sessions to even greater heights.

We see Mamori, one of the playable characters, wearing a new costume based on the Garreg Mach Officer’s Academy uniform from Fire Emblem: Three Houses.

I'm impressed there's going to be a whole new dungeon. Most Wii U ports don't get that much extra content.