Miyamoto asked Aonuma to make a Zelda game with Super Mario Maker-like gameplay, which lead to the Chamber Dungeons of Link's Awakening 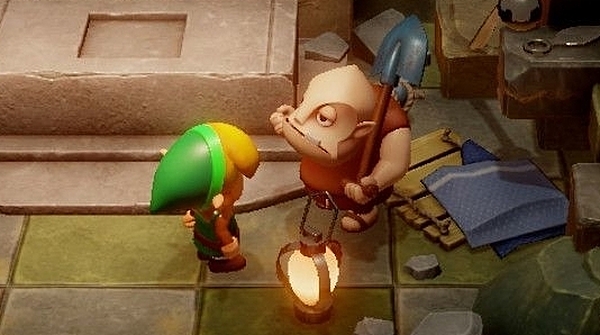 We've heard Eiji Aonuma say countless times that the Chamber Dungeons in The Legend of Zelda: Link's Awakening on Switch are the whole reason the game was remade. Now we finally have some more details on how things lined up. In an interview with IGN, Aonuma reveals that it was a request from Miyamoto that set the wheels in motion.

"I talk to Mr. Miyamoto regularly about ‘the next Zelda game,’ and one time, he asked me if I could come up with a game that features Super Mario Maker-like gameplay, but for Zelda. We talked about how a game like this for Zelda would have dungeons, but it’s generally quite difficult to devise the logic needed to solve them. So we gave some thought into a more approachable style of play where you have to think about how to arrange parts that already have a solution to create a single dungeon, instead of allowing players to create complex arrangements like in Super Mario Maker 2, and that’s how we created the Chamber Dungeons for this game.

Given that the Chamber Dungeons feature is based on using rooms that already have a solution, we went looking for examples from existing titles, and found that the dungeons in The Legend of Zelda: Link’s Awakening would be the most suitable, because each room is usually the size of a single screen, and seen from a top-down view this makes their layout easy to understand. A critical part of the Chamber Dungeon gameplay is understanding the original dungeons before arranging your own.”

I hope they expand on this idea in future with a full Zelda Maker. Allowing for overworld parts to make dungeons with different scenery, like those in Tri Force Heroes, would add a lot of variety. There could even be stuff like pre-made overworlds that get populated with user-made dungeons for a single player adventure.

I would love to see a Zelda 1 remake with a more sophisticated dungeon editor.

How appropriate, seeing as how Links Awakening was a Zelda with Mario-like gameplay.

Aonuma acts like having a full Zelda Dungeon Maker would be too complicated. But people have been able to make functioning calculators in Super Mario Maker. People are a lot smarter and creative than he thinks.

Depends a bit on the tools people and freedome are given. Creativity is lways there, and some might even just make a game inspired by Zelda ;)

But for every working calculator, there are 1000 trash stages.
The general populace is a lot stupider than you think.

And Nintendo wants to make games where everyone, working calculator makers and trash stage creators included, can all have fun, instead of just making games only for the 1 in 1000 that can make a rudimentary calculator out of anything.

Surely people can make trash dungeons that's nothing but a guantlet of random enemies, chests filled with unnecessary items, and rooms that do nothing.

Really all a dungeon maker need to be is a series of rooms that eventually lead to the boss and or Triforce piece. How complicated those rooms are and what puzzles (if any) are in there is up to the creator.

But the problem is, as soon as you design such a game revolving around puzzles and rooms, it takes much less effort to create troll levels.

Mario is fundamentally based on a simple concept: go from left to right.
Mario maker gives obstacles that can be combined to create puzzles, but for the most part it takes effort to create complex puzzles, and little effort to create simple puzzles.

Zelda dungeons on the other hand involve backtracking, multiple keys, and puzzles that may span the entire dungeon from the moment you step foot in it up to the boss battle.

It will take on average far less effort to create troll levels, and take on average a lot longer for players to realize they're in a troll level before knowing to skip it.
(Imagine spending 30 minutes in a user created dungeon only to find the Boss key locked behind a near impossible puzzle.)

Zelda Maker won't work unless Nintendo either heavily restricts customization of dungeons (defeating the purpose) or simplifying what dungeons are to avoid the above problems, but at that point it could no longer be called a 'zelda' style dungeon.

It's not impossible to make work, but it's obvious why Nintendo isn't pursuing a Zelda Maker.

He's been wanting to do a dungeon creator since the very first Zelda. I wonder if this ended up satisfying him.

I'm not interested in what Dampé offers but I'm glad Nintendo added something new for those who wanna play around with it. I just wish the team didn't scrap the Camera Shop. I would have loved to have seen new illustrations of those wonderful pictures in Link's Awakening DX.