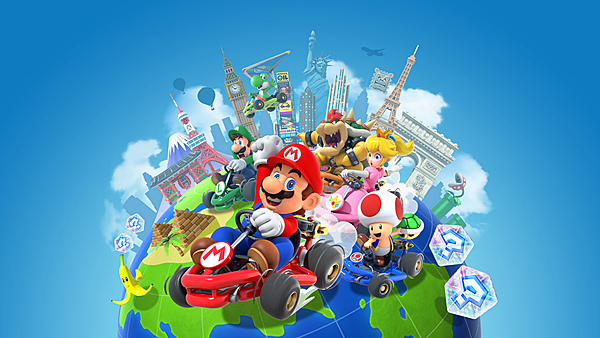 NintendoJam is the newest member of GoNintendo's team. You may have noticed that he's been taking on some news duties Wednesday mornings, and doing a bang-up job at that. As for today, NintendoJam takes Mario Kart Tour for a spin to share his thoughts in the following review. - RMC

Mario Kart Tour is an addictive mobile title clearly intended for the casual market. While the gameplay itself is good, certain elements make the title a frustrating mess overall.

I downloaded the free-to-play mobile game about an hour after launch, and haven't been able to stop playing it since. Many users experienced unexpected errors when first booting up the game, but I was one of the lucky ones. The game ran smoothly for me, and I had no issues in that regard. When first starting my engines in Mario Kart Tour, I felt like Nintendo had created something truly special; a quality Mario Kart title for mobile devices. While the new simplified controls took a bit of getting used to, the experience felt like the product of a legitimate entry in the Mario Kart franchise. All the core mechanics were there, but after just a few hours of gameplay, the tracks became frustratingly difficult when I refused to spend money on microtransactions or subscription services.

The characters you start with in the game are a complete matter of chance. For a game titled “Mario Kart”, I find it unusual that I still don’t have the game’s mascot in my roster after completing every available racing cup on 150cc. Lucky for Mario, he’s actually playable in the game. Luigi is apparently stuck in traffic because while featured in the game’s loading screen and promotional art, as of writing this review he is completely absent from Mario Kart Tour. Although key Mario Kart characters are missing from the latest title, there are some characters newly introduced to the series. Pauline (Super Mario Odyssey) and Peachette (New Super Mario Bros. U Deluxe) both make a welcomed debut. Hopefully they’re both permanent editions to future entries in the long-running Mario Kart franchise. However, with only a 1% chance of unlocking Pauline and others, you’ll likely have to dish out some real world money if you want to race as the mayor of New Donk City. 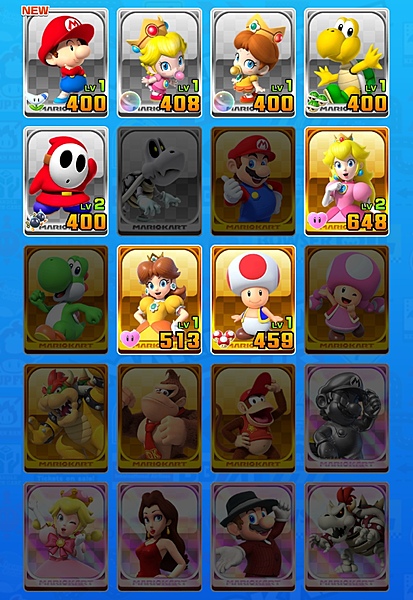 Drifting takes the forefront in Mario Kart Tour. While this feature can be easily turned off in the game’s settings, the default mechanic when initiating a turn is manual drifting. This provides a decent level of challenge during races. At first, this new way of control was slightly frustrating. After spending 165 hours on Mario Kart 8 Deluxe for Nintendo Switch, it was only natural any change in controls would require a bit of a learning curve. However, after completing my first cup, my gears were quickly shifted! I was comfortable and accepting of the new and simplified controls.

Games transitioning control methods from a standard controller button scheme to a mobile touchscreen usually have to make some modifications. Mario Kart Tour is no exception, and acceleration is now done with no input from the player. Unless adjusted, “Smart Steering” is also one of the main control functions. This makes it near impossible to drive into walls or off the track, as the kart smoothly guides itself away from boarders. Turning this feature off provides greater difficulty if you’re looking to spice up your races. 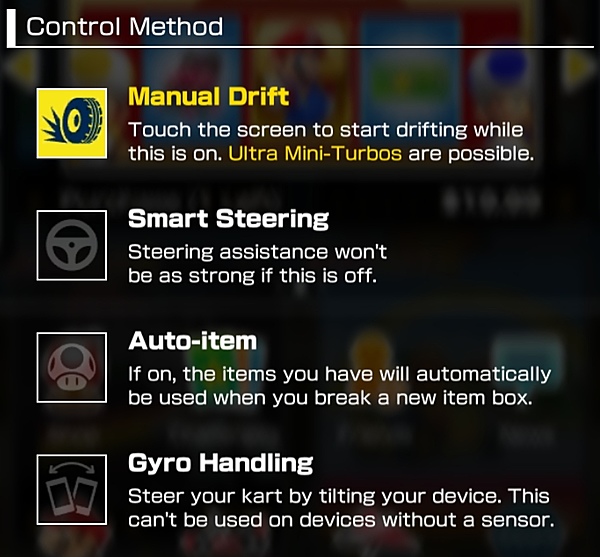 Unlike Mario Kart 7 and Mario Kart 8, kart pieces no longer provide changes to your speed, acceleration, or handling. Instead, depending on the track you're racing on, the karts and gliders you use determine how many bonus points you’ll earn and your extra combo bonuses. The number of points made during a race solidifies the amount of stars you will receive for each track. The more stars earned, the more cups you will unlock, with 5 stars being the max per course. Upgrading the “Points” on your kart or glider can be done through finishing races, or using collected “Tickets” bought with coins. There is a limit to how many points you can earn on your items per day, so after a certain point, tickets are the only option. If you want to “Level Up” your kart or glider, you have no choice but to use a ticket. Leveling up your item boosts its skill level, and increases your bonus points in races. 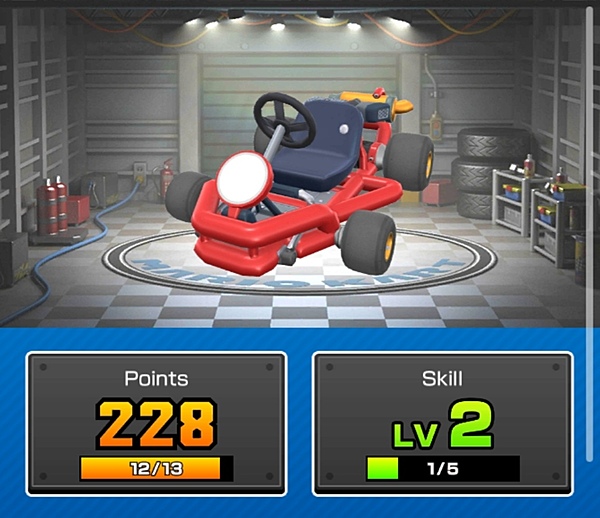 A variety of karts and gliders can be purchased in different ways, one of which is through the coins you earn while racing, which can be spent in the “Shop”. What’s available in the shop changes daily, and the number of items to choose from is determined by your “Player Level” which increases by participating in races. If the item you want is not currently available in the shop, you can either practice your patience, or spend 5 “Rubies” to test your luck with the “Pipe”. 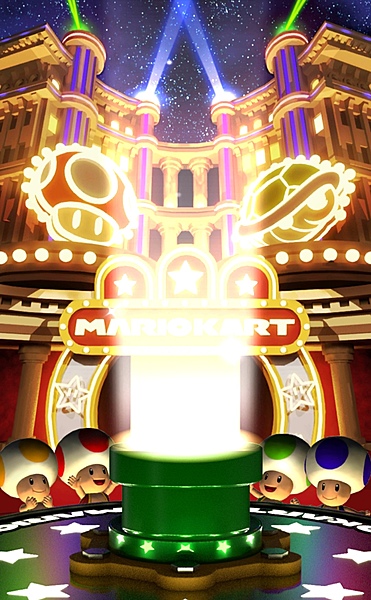 Rubies are earned through stars or completing challenges, and are in very limited supply. Just 3 rubies are worth $1.99 USD in microtransactions. Pipes give you a chance at earning characters, karts, or gliders, and each item has a certain percent chance of being won. It’s no guarantee that what you collect from the pipe is one you don’t already have, which instead only levels up the item instead of earning you a whole new one. It’s a frustrating gacha system that makes you choose between time and money, with still no warrant that you’ll get what you want. 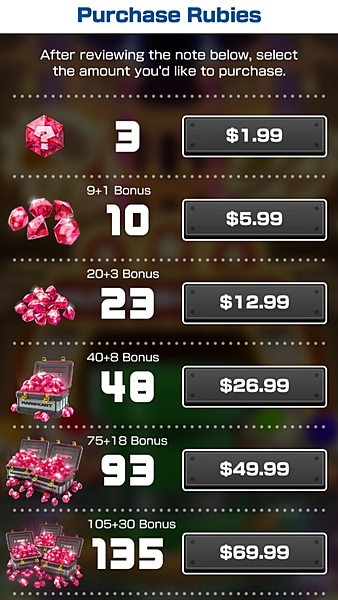 Mario Kart Tour punishes you for wanting to play as your favorite character. The racer you select now changes how many power-ups you’ll get in the item boxes while racing. Each track has different characters that provide you with either 3, 2, or 1 ability per box, forcing you to race using a character you might not prefer if you want an advantage (if you’re lucky enough to have even unlocked the recommended character). Drivers also have a points and level up system in the same manner as karts and gliders.

After playing Mario Kart Tour for just 3 days; I have completed all the challenges, gotten 5 stars on every track, and used up all of my earned rubies. There is no game left for me to play without spending actual money. While the tracks I’ve completed do have some replayability, unlocking the multitude of characters, karts, and gliders that I still haven’t earned would require a major grind in coin collecting. Even if I did collect thousands of coins, I’d have to wait for the daily shop update for only a chance to get the item I want.

Sure, we’re dealing with a free game here. Unlike most free mobile apps, Mario Kart Tour doesn’t contain any intrusive popup ads. However, the amount being charged for a very small amount of features is quite insane. The “Gold Pass” can be purchased to unlock: 200cc, a few karts, a character, and the ability to earn more tickets, coins, rubies, and items when receiving tour gifts (earned by collecting stars). Pricing on this pass has quickly become infamous, as Nintendo is charging $4.99 per month for a small amount of content. That’s more than the Nintendo Switch Online service, which includes dozens of NES and SNES games. 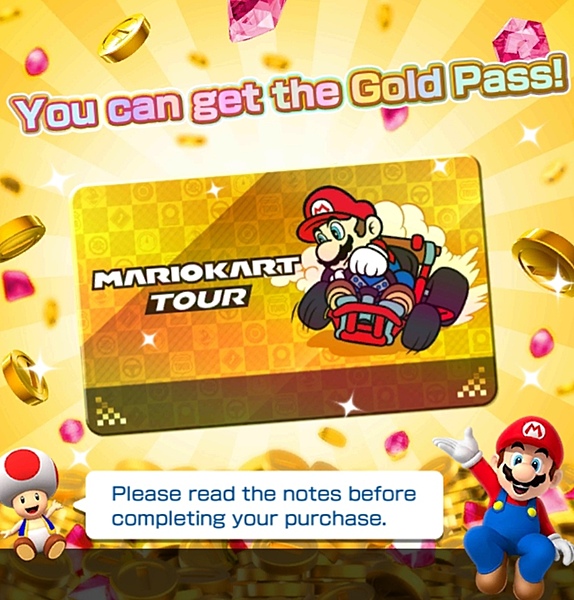 In some ways, Mario Kart Tour is simply lazy. Most of the game’s assets and music tracks are reused from previous Mario Kart titles. While the original renders and compositions are good, there simply isn’t enough new content to make it worth throwing money at a gacha system. There is no short supply of glitches in the game either. Whether it be an opponent not being affected by a shell you threw, or collecting a vanished item block that’s already been collected, you’re bound to have some imperfect experiences. However, this doesn't mean fun and creative new ideas aren't introduced! Bonus Challenges are a blast to play. Each cup contains one of these challenges, and I've genuinely enjoyed them all.

An illusion is created as soon as you boot up the game. Many believe they are racing against actual online players worldwide, however in reality, they are playing with advanced bots using real player’s usernames. Nintendo has confirmed online support will be coming to Mario Kart Tour, and a system to add friends using your Nintendo account is already in place. It is currently unknown when this feature will become available, but if executed properly, I believe my review score could easily go up. 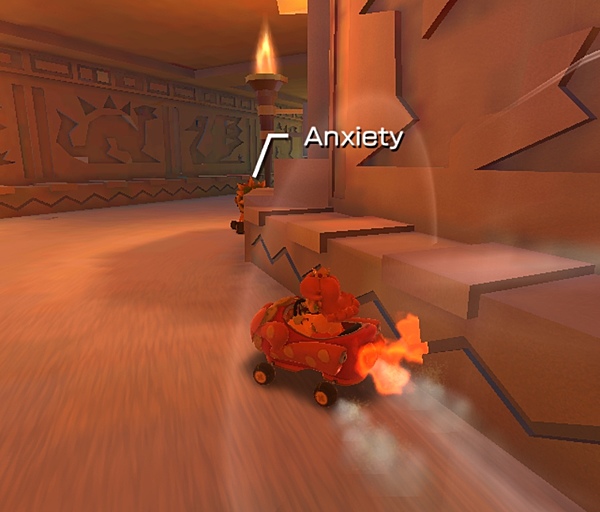 In conclusion, Mario Kart Tour is a decent game. It’s fun for a few hours until the gacha elements begin taking over. There is some replayability, but it feels like progression hits a dead end fairly quickly. The glitches, reused assets, and bad business practices overtake the genuinely fun gameplay experience. If Nintendo charged $4.99 for the game upfront, and made unlocking characters, tracks, and items a process of game progression and skill, Mario Kart Tour could have taken advantage of its full potential. The game is worth downloading and playing for a while, but the main-series console titles will always be a superior experience.

The game is worth downloading and playing for a while, but the main-series console titles will always be a superior experience.

Of course the consoles will always give a superior experience. The idea of them making mobile games is for everyone to get lured to the console games right?

As for this game, I can't believe that after all the talk that Nintendo said that they do not like gamers being exploited or not happy with microtransactions, Nintendo does that exactly. Luckily their console games still don't have them...I hope.

As for this game, I can't believe that after all the talk that Nintendo said that they do not like gamers being exploited or not happy with microtransactions, Nintendo does that exactly. Luckily their console games still don't have them...I hope.

Nah, I don't think their console games will have them. I mean, look at Fire Emblem: Three Houses or the upcoming Animal Crossing: New Horizons (as far as I know), games that came out after their mobile counterparts with no microtransactions or lootboxes.

I don't even enjoy playing the game. I find the controls to be too troublesome. A damn shame as Mario Kart on consoles is my favorite series.

I have fun playing it. Will not spend money