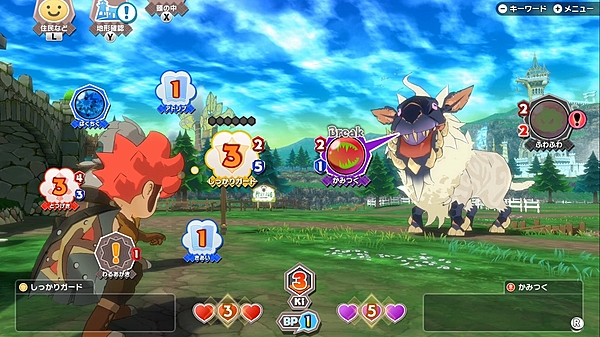 Little Town Hero has been quite divisive in the reviews, with some outlets loving it, and others downright hating it. Have you decided to jump in on it? I'd love to hear your thoughts!

Alright. It's time to write a bit here. Incoming rant. You have been warned:

The hate comes from disgruntled Pokémon fans. The game is wonderful and has a unique battle system that isn't for the faint of heart. It takes strategic planning to pull off successfully. A shame that like always, people just HAVE to find a reason to be immensely hostile to new IPs for ANY reason. And then you wonder why people keep complaining that companies just shovel out the same tired crap year after year (Like Pokémon, for example). Because they secretly just want what's safe and familiar.

They are averse to anything foreign or unique. If it's not an instant overnight success it is cast away with disdain and utter contempt. Arms, Sushi Striker, Dillon, BoxBoy, Ever Oasis. I could go on. All of them unfairly castigated or ignored and put into an arbitrary category of "that doesn't count as a new IP because [I] think it sucks" rhetoric. The sole exception being Splatoon in the last decade, and even then people like that IP for ALL the wrong reasons, and you fucking know it. I think now more than ever it is clear that the gaming populace themselves are to blame for the industry declining in quality. They enable monotony and zero in on all the wrong things without broadening their tastes.

I dare someone to tell me that they're judging this game fairly on its own merits. The concept is within a single town, intimate and focused. This isn't a grand JRPG adventure. The $25 price tag alone should tip you off to this, and is perfectly fair for what it is. Admittedly, the marketing for this game has been very badly managed and obtuse, failing to get across the more TCG-like aspect of its gameplay. But I don't blame them for not bothering. It's not like Pokémon fans will give it a fair shot anyways.

And moreover to the point, I know that a good majority of the negative reviews come from this foolhardy notion that this game gimped Sword and Shield somehow, that resources were diverted in vain. Claiming this game took resources from Generation VII is a load of bullshit; this was worked on by no less than 4 people since at least 2016. Did people forget that they also made Tembo and HarmoKnight during the intervening last 2 generations? Project Gear is for side-projects to let these poor developers flex their creative brains for once. Oh yeah, and those are also 2 other original Game Freak games people lambasted for no fucking reason. Where are these impossible standards coming from?

Pokémon is such a very despicable franchise now. The developers don't care anymore and long for something more, they get pushed around by TPC, and the fanbase is full of nostalgia-blinded manchildren and lowkey furries that bang and piss and pout when they don't get their way. Or, alternatively, turn a blind eye to all the faults and obvious lack of quality in favor of feeding their nascent hunger for these safe, formulaic games. The same sights and pleasures. The same low stakes and self-expressing debauchery of colorful animal checkers.

You think this game is garbage at an immediate glance? This game that had love and passion poured into it? It dared to try something new. Maybe it's not for everyone, not everything can be a crowd pleaser. But it's just so infinitely sad and depressing. Knowing that people are really THAT dumb and ignorant. So keep on complaining about the National Dex. Keep buying these games year after year after year. As far as I am concerned, I'm done trying to waste any more of my attention and energy towards Pokémon as a whole. I'm done. The signs were there since X and Y, but this whole situation has reached the nadir of this series, and Game Freak's Pokémon division.

Wow... That's a WALL of text if I've ever seen one.
You know, I'm a Pokémon fan but that doesn't mean that I have to get every game from Game Freak. I've seen the trailers but the game just doesn't appeal to me at all. Just like many other games from many other companies. I have to draw a line somewhere in regards to how many games I buy and play and if the stuff I see isn't speaking to me in any way I skip it. This isn't about being angry at Game Freak or anything, just about what types of games you like.

You're making a huge leap in logic to assume people hate this because it's a new IP. It simply has the misfortune of being caught in the middle of a Pokemon-related controversy. That's definitely an unfair reason to not give the game a chance.

But even aside from Pokemon arguments, there are certain aspects of the game that look really unappealing to me. I'd reconsider if I heard enough positive word-of-mouth, because maybe it's pretty fun. However, I'm well past taking blind risks on games, especially after Game Freak having disappointed me so many times recently.