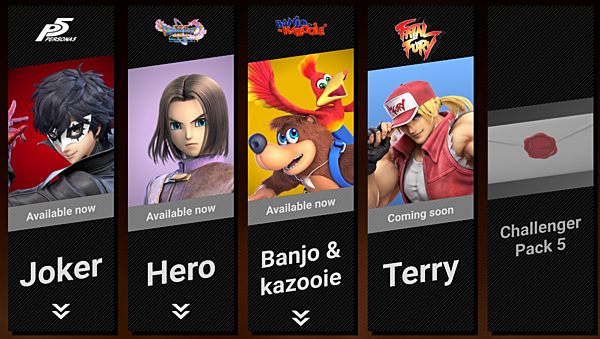 The evidence keeps piling up for Terry Bogard's release for Smash Bros. Ultimate. It really does look like the character is going to launch any minute now. First we had some trademarks on Nintendo's website that had people speculating about a release, and now we have two more tidbits that add to the speculation.

First up, the official Smash Bros. Ultimate website has officially marked Terry as 'Coming Soon' on their DLC page, which always happens shortly before a character launches. Second, a new private video has been added to the Smash Bros. Ultimate YouTube channel. If these two tidbits combined don't point to an impending release, I don't know what does!

Why is the K in Kazooie lower-case ?

I guess they'll announce the fifth figher in that video as well, as I don't think a direct is coming anytime soon.
I still hope for a Resident Evil or Tales of rep.