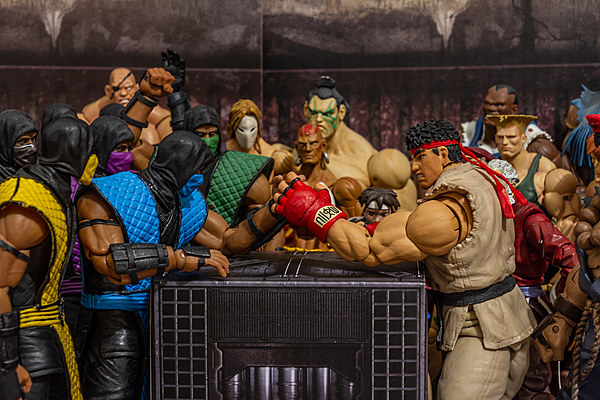 Mortal Kombat x Street Fighter is something fans of both series' have been dreaming of for decades now, yet its never happened. We do know that Mortal Kombat co-creator Ed Boon tried to get the ball rolling on a collab, but it never came to be. In a recent interview with Eurogamer, Street Fighter producer Yoshinori Ono went into more detail on why the idea was shot down.

It's true that a proposal for a Street Fighter character in Mortal Kombat was rejected by Capcom. But it wasn't me personally! There were many people at the company that felt that it wasn't a good fit for our characters. I actually met Ed at the Brazil game show and spoke to him personally about it. So it's true - but I didn't make the decision! (the two worlds don't mix) was the major concern of our licensing.

We don't necessarily rule anything out. We've had our share of crossovers over the years - Marvel vs. Capcom, Tatsunoko vs. Capcom. From Ed Boon's side they had Injustice that had various universes colliding. It didn't work out this time, but Capcom is interested in doing that kind of thing. If we can get something we feel good about, we could move quite quickly to make that happen.

"If we can get something we feel good about, we could move quite quickly to make that happen."

It'll be hard to get a Mortal Kombat character into a game that's for good boys and girls.

I think Sub Zero's ice powers would have the best chance. They could very easily PG everything up with him.

DC doesn't have a problem with it.

The two worlds don’t mix? Didn’t they do a Street Fighter & Tekken crossover? I think he should just say he’s doesn’t want Ruy pulling a fatality.

If Netherrealm can work out a deal with Capcom, Capcom would prefer the SF characters get "Heroic Brutalities" instead of Fatalities -- nevermind Akuma straight ups murders anyone that fights him when provoked enough in the main SF series.

Akuma, Vega, and M. Bison would pretty much would be the only ones allowed to do fatalities. Any SF characters that get caught in a fatality, the fatality would either be done off-screen, done with a gory discretion shot, or done SNES Mortal Kombat style.

Yeah, I don't know how you combine the two. Either the Street Fighter characters are "tarnished" by fatalities, or the Mortal Kombat characters are neutered by being forced to be less brutal.

I doubt Capcom will allow Chun Li's head to be torn off, and I doubt MK fans will be satisfied with kinder, more gentle Kombatants.