What the Golf? developers pull golf ball prank at The Game Awards because "it's a boring show" (UPDATE) 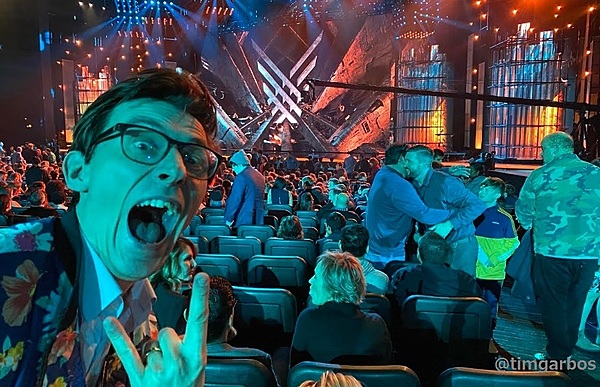 What the Golf was nominated for Mobile Game of the Year at the 2019 Game Awards. This nomination secured TribandProductions, the developer of What the Golf?, a section of seats at the show that was for nominees. The gang sat a few rows behind big names in gaming like Hideo Kojima and others. What did they do while at the show, waiting to see if they'd take home a win? They decided to pull a prank with golf balls.

As the show went on during the night, the What the Golf? team opened up a big box of golf balls and started rolling them on the floor down to the front of the stage. One by one, they kept sending the balls on their journey past the feet of countless other nominees. You might think the move was some kind of viral marketing for What the Golf?, but according to a Kotaku interview with What the Golf? creative director Tim Garbos, that wasn't the case.

“There was a tiny chance for us to make a few more people hate golf, but also, we just wanted to make a thing happen. To be honest, it’s a boring show. We wanted to just have a little bit of fun ourselves.”

Many people find the Game Awards boring, as they do with most awards shows. I am not one of those people, but I do believe last night's show felt a bit off for reasons I can't put my finger on. That said, I think doing something like this just shows a lack of respect and maturity on the part of the TribandProductions gang. Even if you find the show to be boring, show a little respect for your fellow nominees, and the countless people who worked their asses off to put the show together.

I get that rolling golf balls is a rather minor way to show disapproval, but that doesn't make it any less disrespectful. There's nothing wrong with thinking the awards are boring. If that's how you feel, just don't go. There's no reason to try and disrupt the show or show attendees in some way.

As far as we know, the team who put together The Game Awards is yet to respond to the matter. If they do release a statement, we'll be sure to share.

UPDATE - Tim Garbos has reached out to us to share his side of the story, as he believes some of the information shared in the above story is factually inaccurate. The comments below come from an email conversation with Garbos, and have been pieced together into a statement.

While we might not be fans of the show, we meant no disrespect to the show or the people working there. We also did it in a very subtle low key way far from the stage and any area you could step on a golf ball, and they got picked up again. It all happened during a commercial break. We would never do anything to take attention away from other developers/games.

I honestly don’t think that many noticed at the show, so the story is based on a few people who got a golf ball. It was far from any place people could walk and not at all close to the stage. The whole thing took 1 minute during a commercial break. Made a few people laugh and look around, then it was over and all the balls were safely picked up or rolled safely down to the stop thing at the end. I don’t know where the 100 number came from, that’s a huge overstatement. If you look at the picture of the box, I think you can count 13 balls and I had tilted it so it looked like more.

Classic story growing out of proportions on the internet, but we are of course sorry if it inconvenienced anyone. And we won’t do it again. That said the game awards part of the show is still really boring. It’s more of a reveal show, which is all fine, just not our cup of tea.

We’re sorry if it inconvenienced anyone, but it was done fairly controlled and far from the stage and places people could step on them. It was a little fun thing in the small area we were seated at and no one got hurt.

Well they have a good point. Only good with the show is all those reveals.

That show was really boring until that guy rolled those golf balls down the floor. I'm so glad he made that thing happen. I could not go to sleep after that!

This year was the worst of the last 4. Last year was okay the year before was amazing, and before that was a steady incline. This year was a huge miss.

It's reminiscent to how Matt and Trey, (creators of South Park), disrespected the Oscars by taking acid and dressing in drag when they attended. Good for them.

This is the definition of mad lads.

He's making that face that all the worst people make during their selfies. It's hard to like somebody like that.

Isn't that a little dangerous...

I both agree and disagree with them doing this.

Hehe, yeah. I agree the shows are pretty boring, but on the other hand this was very childish. Attention seeking I guess,
.