SEGA explains why Mario & Sonic at the Tokyo 2020 Olympic Games uses 8-bit sprites for Nintendo, and 16-bit for SEGA 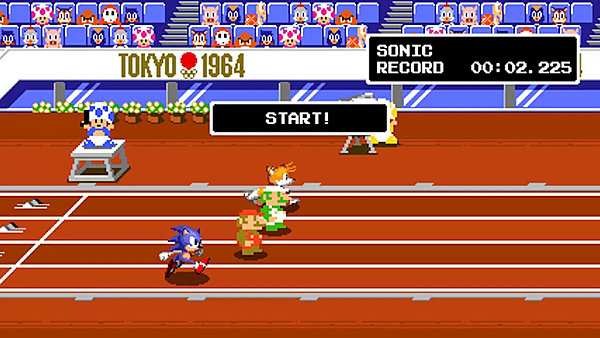 Ever since Mario & Sonic at the Tokyo 2020 Olympic Games had its special retro events revealed, fans have had one question. Why do Mario and other Nintendo characters use 8-bit sprites, while Sonic and his gang use 16-bit? Thankfully we have that answer, courtesy of a 4Gamer interview with director Noahiro Hirao. Unfortunately, the answer isn't as juicy as we'd hoped for.

“We received feedback suggesting we have the animations of the Mario characters in parity with the Sonic designs, since the Sonic characters had more images to work with. And then Nintendo suggested their idea to use 8-bit versions of their characters. We had a really good time figuring things out – we could only move characters by rotating them by 90 degrees, and we had to go back to using the old rules of yesteryear (Laughs). And then there were the obvious issues like with Peach; she only had one image, so how were we going to animate her? Well, by giving her a shaking animation bit by bit, from top to bottom… it really made her look like she was running (Laughs).”

So basically "Nintendo wanted it that way?"

Have they ever seen Super Mario Bros. Deluxe or Super Paper Mario? Those games have additional frames for Peach.