Three more profiles to check out
24 January, 2020 by rawmeatcowboy | Comments: 0 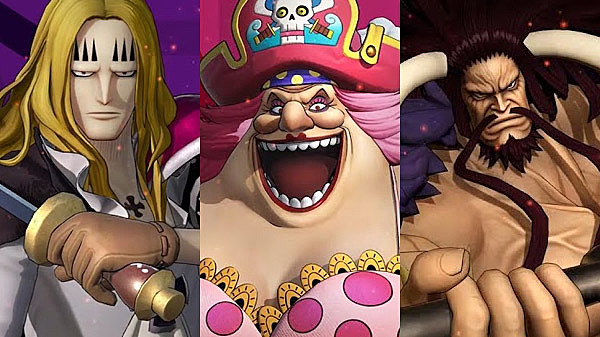 Three more trailers for One Piece: Pirate Warriors 4 have been released. Check out trailers and info for Basil Hawkins, Charlotte Linlin (Big Mom), and Kaido below.

Captain of the Hawkins Pirates. Commonly known as “Magician Basil Hawkins”. His devil fruit is the Straw-Straw Fruit and he has the ability to take damage through the use of a puppet prepared from within his body or even to transform himself into a giant straw puppet. He places great importance on fortune telling and acts according to the tarot card results. Always calm, but can be short tempered; he also hates jokes.

Action Type: Technique – Hawkins wields the power of the Straw-Straw Fruit. He can use his straw sword and nail attacks to bring his enemies very bad luck.

Captain of the Big Mom Pirates. One of the Four Emperors reigning over the New World. Her real name is Charlotte Linlin but is also called “Mama”. Her Soul-Soul Fruit can steal a soul from one person and give it to another. Loves sweets but hates bitter treats and empty seats at “tea parties”. After Whitebeard’s death, she took Fish-Man Island in exchange for treats, but Luffy picked a fight with her when he robbed those from her.

Action Type: Power – Big Mom uses Zeus, Prometheus and Napoleon to execute a wide range of attacks, overwhelming enemies before they can get close. When she transforms, she can unleash the full destructive power of the elements.

Governor of the Animal Kingdom Pirates. One of the Four Emperors reigning over the New World. Commonly known as the “Kaido, The King of the Beasts”. He besieged Wano Country and now controls it. A pirate with a very hard body, known as the strongest creature on land, sea, and air. He wants to start the “world’s greatest war” to break up the world, which he sees as boring. Drinks a lot, and when drunk spends time laughing, or crying.

Action Type: Power – Unleash a variety of powerful attacks with ice, flames and lightning elements.
Fireballs and thunders will remain effective for a certain period of time after an attack, and ice blocks that remain in the field can freeze the surrounding which will give endless damages to the enemies.