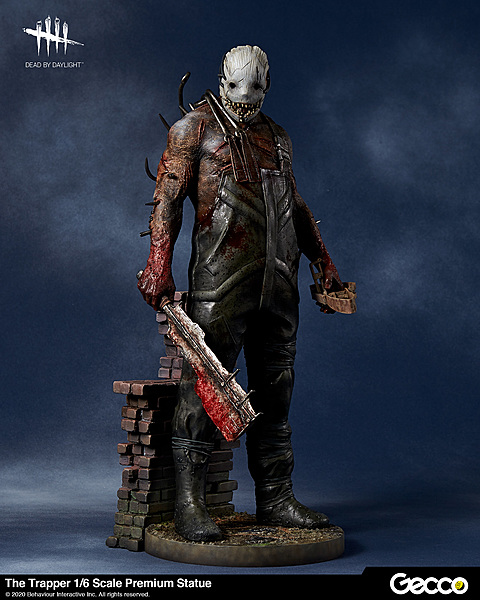 The characters from the asymmetrical multiplayer (One Killer vs Four Survivors) horror game "Dead by Daylight" are recreated as 1/6 scale premium statues.

The savage killer "The Trapper," a key visual of this game, is the second release in the line.

The hand carved innumerable scars all over the muscular and massive body are a impressive and grisly sight. Underneath the skin’s surface layers of muscle and fat are clearly visible and expertly sculpted. The face inside the mask while unable to be seen in the game is elaborately recreated here in this statue.

We dare you to peek behind the tiny gaps. The eyes feature light-up LED glowing white in the darkness. And while just like in the game the areas he stares at are lighted in red, the LED on this statue can be switched to red to create the same atmosphere.

The "Bear Trap" weapon which the killer's name comes from, has open-close feature just like a real trap. The bloody weapon, "The Cleaver," used for chopping up survivors is also finely sculpted.

The platform is made in the image of his hunting ground the "MacMillan Estate." The rubbish scattered around his feet and the stain of coal and tar on the ground recreate the devastated landscape.

If you want to check out more pics of this Trapper statue, or drop down some cash for a preorder, you can do so right here.