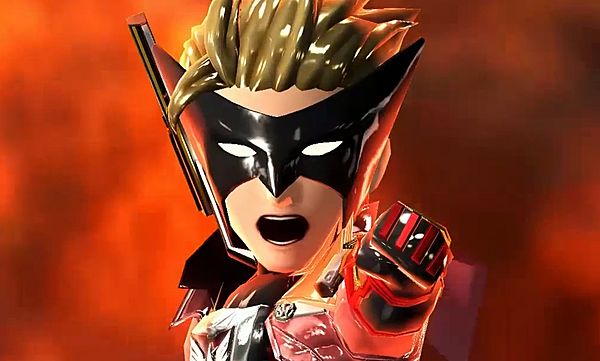 For years now, people have been begging for a port of The Wonderful 101 on Switch. Platinum has also said that it's something they'd like to do, but nothing ever materialized. Well, rumor has it the wheels could be put into motion this coming week, but not exactly in the way we imagined.

The rumor is that The Wonderful 101 does indeed have a shot at coming to Switch, but that's only going to happen via Kickstarter. While you might find that a rather crazy path to porting the game, there does seem to be some evidence pointing that way. The biggest piece of evidence being a Kickstarter profile for Platinum Games that is yet to host anything.

I will say that independent of all the rumor-rumblings, I have talked to a source who claims this is indeed the real deal. This discussion happened prior to any information that has come out today. For what it's worth, I officially put my stamp of approval on this rumor being real.

We'll supposedly get confirmation of this Kickstarter existing on Feb. 3rd, 2020, which is when we hear it'll be opening for funding. At least we won't have long to wait to find out!

Thanks to Dondom95 for the heads up!
Source: Link
Rating: 1

GameXplain's apparent source is a 4chan anon. I'm calling bogus, 4chan anon "leaks" are as trustworthy as a man named Liar McLiarton. These are the same people who kept claiming a Nintendo Direct would happen in January and Dante would be revealed as Fighter 5.

Why wouldn't Ninty handle it? Yeah it sold poorly, but sure would sell more on a console thqt has a waaay bigger userbase. And it's a port, not a new game.

How would the game be without the gamepad? Crap, I would miss that.

I don't trust rumours, so I got my planet of salt ready for this one

It'd likely sell just as poorly on Switch as it did on Wii U. Bayonetta 2 did marginally better on Switch than Wii U.

Gameplay wise, it can be played without the gamepad on Wii U, so that's no problem.

Hmmmz. Last I heard, bayonetta 2 sold pretty good on Switch compared to U. And now that the Switch has sold more than 50M units, and Platinum getting a bigger name than before, I think it could get a better chance on Switch... With good advertisement it COULD do OK.

Yeah, it CAN be played without the gamepad, but it's still a core part of the game me thinks. I think it would loose some immersion. Well, for me at least.

Are you sure B2 did better on the Switch than on the Wii U? B2 sold pretty good on the Wii U.

This is terrible news, if true. I don’t think this bodes well for the likelihood of the game arriving on switch. However, I will contribute Kickstarter if it does happen.

Update: I just read that the kickstarter and will include Xbox PS4 and PC. While I’m happy with the possibility of a bigger install base for the game, it’s saddens me. Shame on you Nintendo for not keeping this one under your roof.

Well... that would be confusing if true... and massively disappointing... seriously, of all the IPs they could let go of, why one of the good ones?!

Dude(ett)!! It's a Nintendo IP. So this rumour is getting more and more ridiculous =D

Nintendo is foolish for letting this slip through their fingers.

Oh I so agree (if any of this is true, but...). But I just can''t see them let it go. It's still their IP for one, and they usually would not let go of any IP. Japanese pride and all. Another thing is that Platinum had Nintendo in mind when making the game and the two are still pretty good friends (with the great sales of Astral Chain, they should be).

I don't know, but this just sounds odd in so many ways.

Hey! We rarely agree on things. I'll celebrate with a beer. Cheers, Ducky!

GameXplain's apparent source is a 4chan anon. I'm calling bogus, 4chan anon "leaks" are as trustworthy as a man named Liar McLiarton. These are the same people who kept claiming a Nintendo Direct would happen in January and Dante would be revealed as Fighter 5.

Jason Schreier is backing up GX on this one, so I'd say it's practically a lock that this is true. Say what you will about Kotaku, but Jason is one of the most credible journalists in the industry.

Look, it was just that one time that I trusted Mr McLiarton; can we please stop bringing it up???

I’ll be completely surprised if this happens and even more so if it comes to other consoles. They could have bought back the IP from Nintendo and given how poorly the original sold maybe Nintendo don’t care to hold on to it but still, sounds mad to me. No smoke without fire though, few people who have proven to be in the know multiple times are saying it’s all true so I guess we’ll see. I’m definitely up for giving it another try, it didn’t quite do it for me when I tried it on Wii U.

I guess people still need to be educated about the ownership of ips.

Nintendo owns the ip. It's stupid to assume that they don't since practically all their ips and even the dormant ones are not expired.

Come to think of it, since when has a Nintendo Ip lost ownership rights and some dev took over to bring it back?

Hard to know what goes on with IPs and games without being privy to the details. I’d have thought Devil’s Third was owned by Nintendo when they decided to publish it but then the online portion ended up coming to PC less than a year after the Wii U launch. Lego City Undercover, while obviously not a Nintendo IP, was fully funded by Nintendo and so I expected it to remain Nintendo exclusive...then it wound up on PS4/XBO a few years later (Goldeneye 64 still hasn’t been re-released because of Nintendo’s stake in it so LCU being an external IP doesn’t matter, clearly a different deal was made there).

Maybe developers who have lost IP rights have always had the chance to claim them back from Nintendo but never been able to meet the asking price so it’s never happened, who knows. We’ll see, but I would rather see Nintendo just fund and publish the port instead of having to rely on a Kickstarter to get it off the ground (something that’s not even guaranteed to succeed).

Hard to know what goes on with IPs and games without being privy to the details. I’d have thought Devil’s Third was owned by Nintendo

The game is owned by Nintendo. The part that is online is not.

Lego City Undercover, while obviously not a Nintendo IP, was fully funded by Nintendo and so I expected it to remain Nintendo exclusive

NCL didn't publish the game but it was NOA who published it. Anything published by NOA means that they don't own the rights to the game...atleast in theory. I mean that's why Professor Layton was not exclusive to Nintendo since Nintendo published it outside Japan.

Wow. Your confidence in yourself sure was misplaced now wasn’t it. Speaking of course of the recent announcement that indeed this game is coming via Kickstarter and PC, PS4 (and likely Xbox as well) are INCLUDED in the stretch goals. Care to explain this, O Wise One?

It's one of the first times Nintendo has done such an act.

Platinum themselves said that their blessing made it possible for it to go multiplat.