Shin'en discusses why they went with voxels for The Touryst, and playing with the "absence of things" to create a special look

One of the most gorgeous games on the platform
21 February, 2020 by rawmeatcowboy | Comments: 4 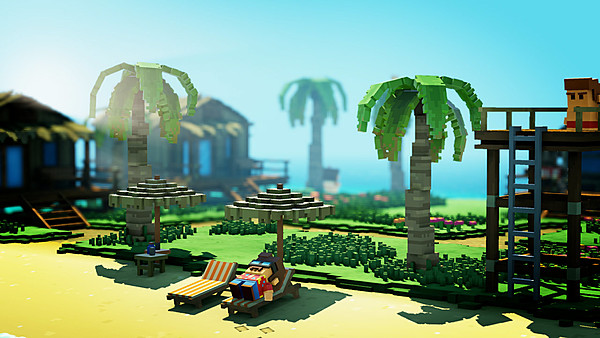 Shin'en is known for games that really push the visual limits of the platforms they appear on. They've created gorgeous experiences on the Wii and Wii U, and they've done it once again with The Touryst on Switch. That's thanks in part to the decision to create a world with voxels.

In an interview with Gamasutra, Shin'en's Manfred Linzner says that going with voxels was a way for the team to achieve a somewhat retro-aesthetic. In some ways, Linzner says using voxels lets them see what games might look like if developers never jumped from pixels to triangles.

Linzner also goes into detail on how the graphical decision enhanced the game itself.

“We wanted to create an adventure game. We developed a few prototypes to find something special and one of them was located on a lush island. We made jokes how nice it would be to go on vacation on that island instead of sitting in the office. In that moment we realized that we wanted to make a game exactly about that - going on vacation!

...For us it was also important not to crank up everything to '11.' Having high detail everywhere is like having no detail at all. Often it was the absence of things that let places look special.”

They have been creating great experiences long before the Wii. They first developed for the GBC. I became a huge fan after playing Iridion 2 on the GBA.

I'm looking forward to this title, and I hope we get to see more original games from them on the Switch.

No need to look forward to it. It's been out for some time now

Really? I wonder how I missed the date when I was looking it up last night.Well, thank you! I'm gonna get it next paycheck~.