Looks like we have the motherload of content on some rumors Retro projects that were cancelled years and years ago, all thanks to the gang at Shinesparkers.

A gallery of concept art from Sammy Hall, a former Retro pre-production artist, has just been discovered online, and it contains all sorts of interesting art and blurbs from Hall himself. First up is a cancelled Zelda spin-off title, which is a rumor we've heard floating around for years now. 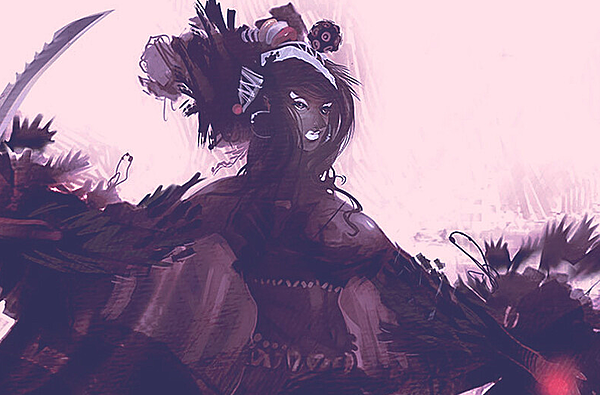 The game was in the works sometime during 2005 to 2008, and it would have focused on the origin story of the Master Sword. The game would have taken place during the bad ending of Ocarina of Time, and would play as an action/JRPG where you follow the last Sheik while Dark Gerudo are attempting their 100-year birth to Ganon. According to Hall, this project never made it past pre-production. 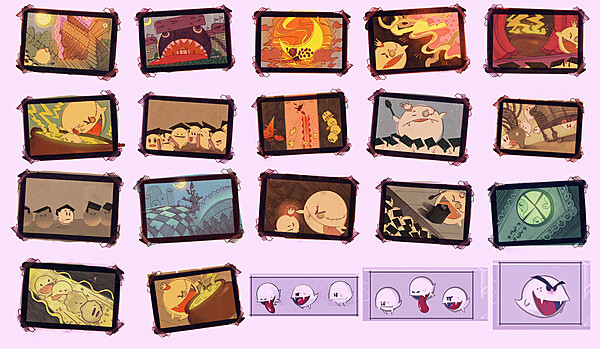 Along with that, Hall also shared art for a cancelled Boo project, which was tossed around during 2006 to 2007. According to some of the tidbits mentioned by Hall, it seems this would have been a project for a portable, most likely the DS. The art makes references to “possession powers” and “Broomies”, alongside a sketch of what looks to be a world map.

If you want to see more concept art for the Zelda project, you can see a number of images in Hall's portfolio here.

Thanks to NintenDaan for the heads up!
Source: Link
Rating: 1

Hmm, never thought I would see concept art of a Boo getting crucified. I can see why that project was cancelled.

Doesn't this seem like odd timing after the recent leak.

Coincidence. The source of the leak would have had zero reason to have any of these assets on those servers.

would have focused on the origin story of the Master Sword.

Sounds better than the origin story we did get for the Master Sword being it inhabited by the most annoying character in Zelda history - “Hey Listen” on steroids.

I hope someone somewhere makes use of the rhino/centaur enemy! It looks so good!!

Erm... I'm confused... how do you do an origin story for the Master Sword after it's been made? Would it be told like Breath of the Wild's story?

I assume it would have been us learning about the origin rather than actually playing through the origins of it.

Discovering hidden temples and lore or something that explains how the master sword came to be. Like how we are told in OoT how the Triforce came to be without actually playing through that point in history.

The premise of this supposed Zelda game makes zero sense to me. First of all it mentions it taking place in the "bad ending" of OOT, which unlike the timeline proper is actually something that was made specifically for Hyrule Historia, to explain the major contradictions between the ending of OOT and the prologue of ALttP, which released in 2011 not when this game was being thought up which is listed as 2005 - 2008. Secondly it being after OOT makes zero sense because:

-The Master Sword already exists
-Impa is the last member of the Sheikah and is basically dead what with her being a Sage...though granted this is an issue with any game bar BOTW that involves the Sheikah.
-Ganondorf is alive and sealed away, not waiting to be born. Also even in OOT proper the Gerudo seem hesitant to blindly follow Ganon.
-Also "Sheik" is not a tribe but one fake person made up by Zelda, who's physically Princess Zelda and thus a woman.

Granted I'm not trying to say the art is bad, it's actually really good, though not a artstyle I would personally want in a Zelda game; I just don't quite get what they were going for.

I just don't quite get what they were going for.

I guess I worded that wrong. What i meant was that the supposed setting is a jumbled mess. Granted it's concept art and likely never got even close to getting through the writing phase, but what this individual wrote about this games setting implies it was half trying to take it's setting seriously and half written by someone who's never played a Zelda game before, at least based on what the artist wrote in regards to the potential setting of the game.

Also to clarifiy I'm talking about the writing of the setting not the artist, when I say "never played a Zelda game before."

Could have been fun if they actually worked closely with Ninty on the story part and got this game, with the style, going. Would have been a verydifferent Zelda game indeed.

Pretty sure that Aonuma determines timeline placement just by throwing a dart blindfolded at a board marked with all the different eras right before pre-production, and the devs under him just have to go with it.

Literally no game in the whole series that's bothered to have a timeline placement works like that.

Games with more ambiguous placements like the Four Sword Trilogy (minus Minish Cap,) the Oracle games, and TFH are sorta left up in the air, but every major game ever made by nintendo, including BOTW is written directly with a placement in mind.

People who try so hard to deny the timeline must just not read any of the text when they play Zelda games, because how the majority of the games connect has never been a secret.

Dude... I was joking. I'm sure there's a method to the madness, it's just easy to make fun of the madness sometimes. Relax.

Yeah...sorry, I just hate the "timeline deniers" that crop up every time someone so much as mentions a word that sounds like "timeline."

Like the majority of the games are sequels or prequels to other games, so it's always infuriating when people try to take the stance of "there is no timeline" as while it wasnt all made in 1986, there's always been some sorta timeline.

That said I'm sorry I didn't mean to be rude or aggressive.

It's alright bud. Just letting you know, half the stuff that comes out of my face is either hyperbole or a bad joke. I know a lot more thought goes into the timeline of the games - I've seen breakdowns of individual games and even saw some of it myself - but sometimes I do wonder whether Aonuma or Miyamoto ever intended any of this when they made the first Zelda game back in 1986. Clearly the thought is there now, but back in the early days, I doubt that they had any idea of how big a hit it was going to be. So if I ever make the dartboard joke in the future - I actually got it from a Dorkly comic on the subject, link below - it's more in reference to that thought than any hatred of the idea. It's cool that series callbacks like the horse always being Epona are worked into the lore, and it gives the current game a lot more life than it would normally get. For me, though, sometimes a game's just gotta be a game, amiright?

Now if only someone would leak whatever the hell Retro has been working on since late 2013 when Tropical Freeze wrapped. Jesus Funky Kong really took 4 years to develop I guess..

That remake or re-release of DKCTF was so disappointing.
Funky never made it for me and I still just have the Wii U version of the game even if I definitely wanted to get the switch version. It should have been so much more.

So that explains the long hiatus of Retro Studios.

Well it doesn’t since these concept works are reportedly from 2005-2008 when they were in the middle of the Metroid Prime Series and before DKCR.

Retro employs some of the best artists in the industry to create lining for Nintendo's trashbins. Total power move.

My guess is that the Boo project would've been a King Boo origins story.

Gameplay-wise, I could see it as a stealth-puzzler, with the Boos trying to catch Mario/Luigi/any random person, but being scared away when they get looked at. It would play kind of like Ghost Trick, where you'd have to possess objects to maybe distract your target, and attempt to sneak up on them while they're distracted. It'd need some fleshing out to be interesting, but it might've been a cool little side game. Too bad it got canned.

The more stories like this I see, the more I'm convinced either that Nintendo doesn't like new ideas by other people or could greatly benefit from even a small bit of hindsight. Not as bad as Rare being forced to make Kinect games, but it still hurts a bit to see.

This leads more credence to the fact that the long radio silence between Donkey Kong Country: Tropical Freeze and Metroid Prime 4 may have in fact just been numerous failed pitches over the years.