"The heartwarming and feel-good RPG that the world needs right now."
27 July, 2020 by nintendojam | Comments: 1 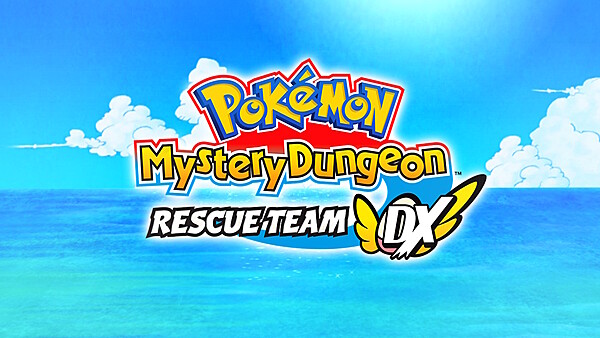 The game starts off with a short personality quiz to determine which Pokémon you'll play as. Taking the perspective of a Pokémon is an exciting and refreshing take from the mainline series, and opens up many new opportunities from a gameplay and storytelling standpoint. You'll now be able to communicate with your other fellow Pokémon directly, but there is a twist! You're actually a human cursed with a transformation spell. How did this happen? That's for you to find out along your adventure. Once your main Pokémon is decided (I got Eevee), you get to choose a main partner from 16 different options. After making your selection, your journey as a newly founded Rescue Team will begin. 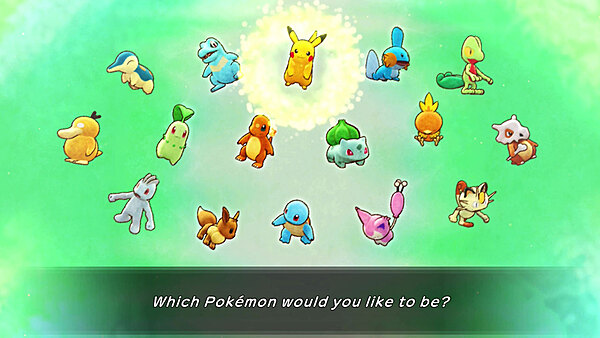 Many Pokémon are in dire need of your help, whether they’ve fainted, got lost, are hungry, or have been captured, your job as a rescue team is to save them. Requests are received through natural progression by following the main storyline, but many side missions are available from the post office at the Pokémon Square (the town hub), or from the mailbox at your camp. Side quests are important and frequently needed to level up your team, recruit new team members, and collect useful items for the more difficult dungeons. Every Pokémon you rescue will increase the rank of your Rescue Team.

While at first feeling slightly overwhelming due to the many different gameplay mechanics, Rescue Team DX isn’t extraordinarily complicated once you get the hang of the way everything functions. Mixing elements from both traditional Pokémon RPGs and roguelike dungeon crawlers, you’ll soon find that everything has its place as well as its purpose. Grid-based movement and turn-based combat is the core of gameplay, with other aspects you'll also have to take into account, such as; HP (hit points), hunger, XP (experience points), PP (power points), items, rare qualities, move-linking, etc. Below you can find an explanation for each of these mechanics. 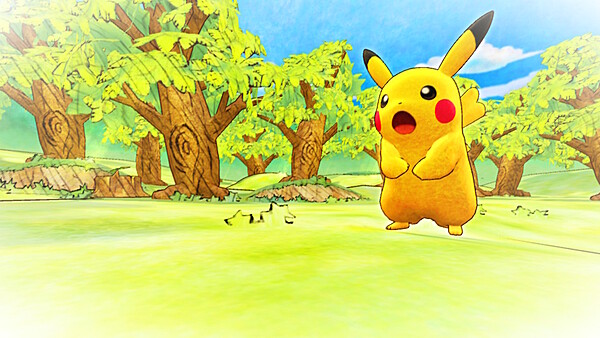 - HP (hit points): Basically a health bar. The amount of damage you can take before your Pokémon faints. Refilled by moving around the dungeon (or by eating an Oran Berry).
- XP (experience points): Earned by defeating foes, XP is what you need to level up each Pokémon. Helps to increase stats for HP, attack, defense, and speed during battle.
- PP (power points): The amount of times each move your Pokémon has can be used. Can be recharged by using an elixir.
- Hunger: Although walking around in the dungeons refills your HP, it also depletes the hunger of your equipped Pokémon. Apples are the best source for filling your belly, but other items, such as berries, can also help slightly. Damage will be taken for every square traveled on the grid when your stomach is empty (but only when the Pokémon is equipped).
- Rare Qualities: Replacing and simplifying the “IQ” mechanic from the original Red/Blue Rescue Team, Rare Qualities are abilities that some Pokémon may possess that provide benefits to your entire team. While randomly found recruited foes may have one of these naturally, rare qualities may also be manually initiated by giving your Pokémon “Gummies”.
- Linking Moves: Move linking can be done remotely while in a dungeon using a Link Box, or anytime from Gulpin’s shop while at Pokémon Square. Allowing your Pokémon to perform two different attacks, one after the other, simultaneously, some move links are much more beneficial than others, and a recommended list of combinations will be mailed to you early on in the game (or can be easily found online).
- Items: Found spread across dungeons, earned by completing rescue missions, or purchased from the Kecleon Shop at Pokémon Square, there are many different items, each type with a particular purpose. ‘TMs’ teach your Pokémon a new move, ‘Orbs’ and ‘Seeds’ both provide unique and useful effects, ‘Equipment’ gives the wearer a special ability, ‘Food’ helps to heal status conditions (such as burn or poison) as well as fill your belly, and ‘Vitamins’ restore your PP or increase your stats. There are lots of other items to find too, so make sure to look for the blue dot on your minimap when exploring dungeons. Also, note that you can only carry so many items on you at one time! 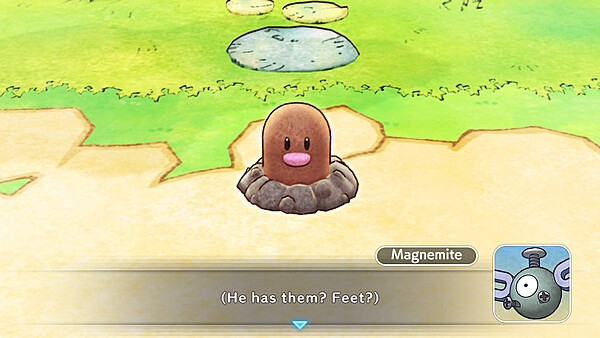 Dungeons are made up entirely of grids, allowing you and your team to travel square by square to strategically attack foes and make your way to the hidden stairs leading to the next floor. While the grids are normally invisible, you can easily enable them to help plan out your attacks. Whether it be up, down, left, right, or diagonal, each movement that you make also initiates the movement of the enemies that you’re sharing a floor with. Sometimes you may want to attempt to head straight for the stairs if you’re low on HP, but other times, battling all the foes in your path may be of your best interest for XP purposes, or to potentially recruit them for some extra support on the rest of your mission. Auto-play is an available option during gameplay if you don’t have the patience to battle the foes and manually make your way through the dungeon.

Knowing your Pokémon types is just as important in Mystery Dungeon as it is for the mainline Pokémon games. Choosing the proper team beforehand, as well as the Pokémon you use to initiate attacks during dungeon exploration (you can specifically control different Pokémon on your team by pressing +), is highly dependent on the types of foes you’ll be facing. Make sure to do some studying if you aren’t already familiar with type weaknesses! 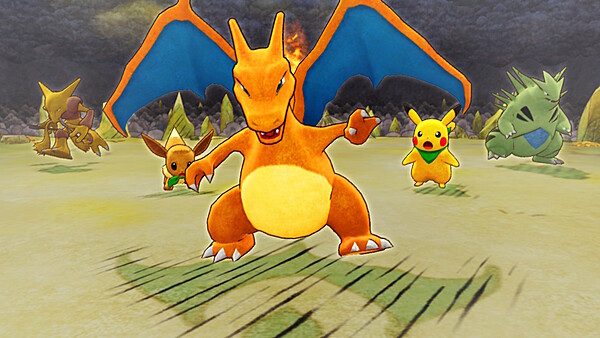 When battling foes in a dungeon, you can press A to use your team members default attack, or press ZL to select a specific move. While the beginning of the game lets you get away with mostly just button mashing A, you’ll likely need to be more strategic as the game further progresses (especially if you don’t grind side missions or level up your Pokémon at the Dojo in Pokémon Square). Defeating an enemy results in either a complete vanishment, or a team recruitment. When a Pokémon requests to join your team, they will fight alongside you until you escape the dungeon you found them in. Making it all the way to the end of the dungeon without your new teammate being defeated, there are two possibilities; If you own the proper camp for them to stay at, they can become a permanent addition to your Rescue Team, but if not, they will simply thank you for the adventure by giving you some Poké (the currency in the Pokémon universe).

Poké is most importantly used for purchasing Rescue Camps at the Pokémon Square, which allow recruited Pokémon to join your Rescue Team based on their type. While you may not be able to “Catch ‘em all” in this spin-off game, you sure can try to “Recruit ‘em all!” There are many camps available to purchase ranging from low to high prices, so make sure to collect as much Poké as possible when adventuring through dungeons and completing missions. If you’re saving up for one of the more expensive Rescue Camps, be sure to deposit your Poké at the Felicity Bank. If all your team members happen to faint while traveling through a dungeon (and you’re unable to get help from someone online), you’ll lose your collected items and Poké! 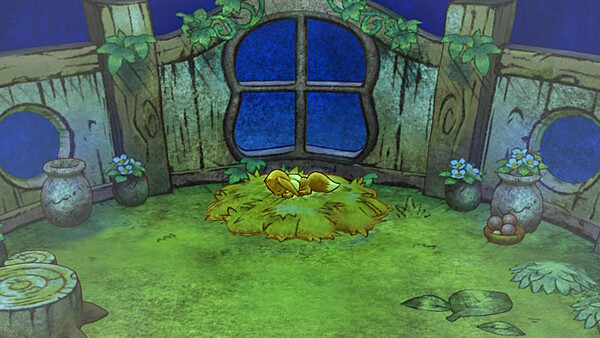 Taking about 10-20 hours to complete the main story featuring plenty of mysterious dungeons and legendary boss battles (quite literally), Rescue Team DX is a Pokébarrel of fun despite some noticeable gameplay repetitiveness. The load times are snappy, the soundtrack is catchy, the graphics are pretty, and the watercolor-like artstyle is exactly the coat of paint that the original Game Boy Advance and DS games needed.

Pokémon Mystery Dungeon: Rescue Team DX is the heartwarming and feel-good RPG that the world needs right now. With dozens of hours of content, fans of both the Pokémon series and the roguelike genre are bound to get some enjoyment out of this adorable-on-the-outside yet challenging-on-the-inside title. While the $60 price-tag does admittedly feel slightly steep, if you download and enjoy the free demo that's now available from the Nintendo Switch eShop and are itching for more, purchasing the full game is absolutely worth it.

I really like this remake and my time with it It was my first time playing the mystery dungeon series and it felt refreshing and charming to play as a pokémon instead of a trainer. It highlighted a side of the world of Pokemon that really isn't that invested in outside of this series.