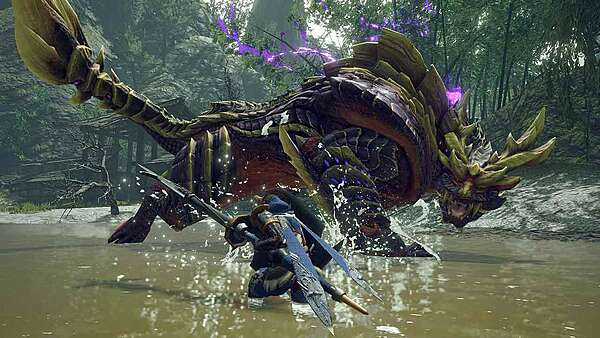 Monster Hunter Rise was revealed just two days ago, yet new info continues to pour in. Check out a summary of overall gameplay details below, courtesy an Arekkz interview.

- players and monsters can move seamlessly between areas without any loading screens
- maps will have more verticality to them
- there will be other creatures outside of monsters that inhabit the landscape
- there will be a broad variety of monster types
- Palamutes (K9 companions) can be customized for each other, and they have a number of offensive moves
- there will be post-launch support with free content and more
- targeting 30fps

Along with that, we found out some news that appears to be just for Japanese audiences right now. Over in Japan, there will be a Monster Hunter Rise 'hunting buddy pack' that is priced at $140. This version of the game includes 1 physical copy, 1 digital copy, double the limited edition perks, and a special hunting duo pack with useful items like 80 mega potions, traps, lifepowders, etc.. Obviously this option is being offered for those who have a friend that is just as excited about Monster Hunter Rise as they are.

Thanks to Dondom95 for the heads up!
Submitted by: dondom95
Source: Link, Link
Rating: 2

The flagship monster's design was kinda incomprehesnible for me in the promotional stuff but seeing that screenshot I'm just like "Oh it's Zinogre In Samurai Armor."

I hope the event quests go back to how they've been in the portable games, where you just download them once and have access to them forever, instead of being time-limited like in World.

And on that same topic, I hope we get lots of Nintendo collab stuff again! I need a Wolf Link costume for my Palamute!

It all sounds good, except for the 30fps. But it’s the Switch, so you can't expect a lot. That pack for $140 sounds like a rip-off as well.

Considering Rise is roughly $80 in Japan, it's actually not a rip-off at all.

It's not worth arguing with that one. They only flood the comments with inaccurate negativity.

They're both a rip-off. Base game and the Hunting Buddy Pack.

Well, a lot of games are actually around $80 in Japan, it's not uncommon.

Have you got a link showing that it's $80? It probably is that price, because Capcom. The vast majority of Nintendo titles cost ¥5.980, which is less than $60. There's the odd exception like Super Smash Bros Ultimate, which is ¥7.200(<70) or Ring Fit Adventure, which comes with accessories costs ¥7.980(~$76). Then there are cheaper Nintendo titles like Clubhouse Games: 51 Worldwide Classics, ¥3.980($3

. I don’t think it's an accurate statement to say $80 is uncommon. That converts to ¥8,365, and I don’t see many games at that price, Yes, there are some, but that's at the very high end of prices and I see a lot of them fail miserably.

First off, I said "around" $80, as conversion rate and whopper metric are never exactly the same.

For instance, switch is 299.99 in the US, which currently converts to 31,366.35 in yen, but in Japan Switch's price is 29,980 yen.
That's because the demand at any given time between buyers and sellers of USD and Yen dictate one conversion rate and change often, while the value of things domestically, or the way people within the country value their unit of money at, is usually stable, meaning the two differ.

The way an american thinks about 299.99 usd is the general equivalent of how a Japanese person thinks of 29,980 yen, even though they aren't exactly equal at the current conversion rate due to fluctuating conversion rates.

So to say "I don't see any games at 8,365 yen which is the current conversion rate so what you say isn't true" is disingenuous at best and trolling at worst (especially since I said around $80, not exactly $80), unless you truly don't understand what conversion rates are based on.

The above games all launched at roughly $80, so yes, games at around $80 in Japan is not uncommon, even for very successful games.
There's more examples on switch and even more on PS4, even though ps4 games are generally the same price as switch games in Japan.
The current Japanese video game market accepts a very much broader pricing spectrum than the current US equivalent does.

So with Rise being roughly $80 in Japan, roughly $140 for two copies and a few extras is not a rip-off at all, and would save you money compared to buying a physical and digital copy separate.