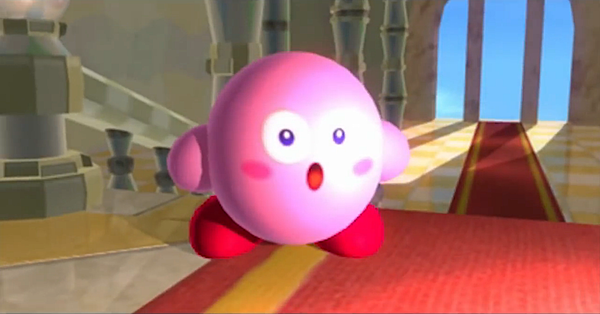 Nintendo and HAL have tried to bring Kirby into the world of 3D games numerous times in the past, but nothing ever panned out. We've seen Kirby in polygonal form multiple times, but was always in 2D side-scrollers or small experimental projects. Now we might have a peek at the two companies trying to expand Kirby into the third dimension once again.

Kirby Fighters 2 randomly saw release just a few hours back, but dataminers are already digging through the game to see what they can find. Surprisingly, the game appears to be hiding some very interesting test code. Tucked away inside the data is something called "Kirby3d," and it includes elements tied to Kirby, Blade Knight, Waddle Dees, and a sword. The code in here is completely different from Kirby's Blowout Blast, which was a somewhat 3D game on the 3DS. This code could very well show that Nintendo and HAL are finally ready to make the true 3D leap with Kirby.

The source code also contains a bunch of different experimental mini-projects that use a Kirby base template, but the real findings here come from "Kirby3d." Looks like the future of Kirby could be very interesting indeed!

Please don't. Kirby is a series that should forever stay 2D.

Change is a must in the gaming industry. Otherwise franchise fatigue sets in and sales go down.

Kirby Star Allies has been panned for being just as boring/tame as Kirby Squeak Squad was (it was the other low point of the franchise).

Star Allies and Squeak Squad are indeed the weakest main Kirby games. But the 3DS games showed how awesome 2D Kirby can still be.
It's just that I can't picture a 3D Kirby. The top down one from the 3DS was kinda awkward. You'd need to have some sort of lock on mechanism for a 3D Kirby game to work. Can you imagine a Kirby game with a lock on just like Ocarina of Time?

Super Mario Galaxy 1 and 2, 3D Land, 3D World, and Odyssey were 3D platformers and they all didn't need a lock on mechanic. It's just a matter of positioning Kirby where you want to attack in front of him. Kirby can be made to move like Mario does in the 3D games and his flying ability can be put on a time limit like in Kirby 64 to keep the levels from being broken by infinite flight.

And look what happened to Sonic now... :P

I'm optimistic here cause this is Hal who made the Pink puffball so they know what they are doing. But that doesn't mean change is always a good thing. Especially considering that Hal is still a very small staff who have no experience making 3D games in...anything.

While I'd be interested in seeing how they'd make a 3D Kirby, I completely disagree with your sentiment. There are lot of well loved series that have retained their core gameplay and mechanics, and people love them for that. A big one that comes to mind besides Kirby is Dragon Quest. I appreciate when developers know what they want their franchise to be instead of trying to chase what's trendy or alienate their fans for more "mainstream appeal", whether it works or not. There are plenty of other games you can play if Kirby does nothing for you

We can have both, why not