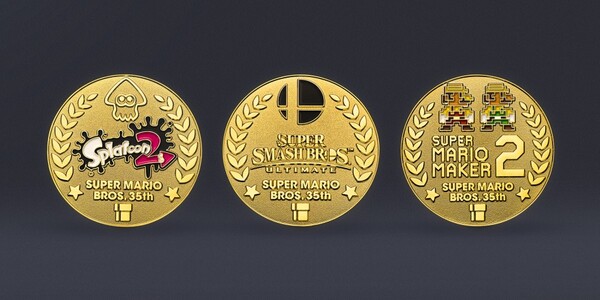 Want to get in on some extremely limited Nintendo goodies? Nintendo UK is giving fans a chance to win collectible medals for Super Mario Maker 2, Splatoon 2, and Smash Bros. Ultimate. Want to see how you can win? Check out the official press release below!

100 special collectible medals will be up for grabs in the Super Mario Maker 2 and Super Smash Bros. Ultimate events each, and a further 200 medals will go to the top 100 players on each team in the upcoming Splatoon 2 Splatfest (that's 400 medals in total). This means you'll have three chances to win one!

As pictured above, each medal is engraved with the respective game’s logo as well as the Super Mario Bros. 35th Anniversary logo engraved on the other side.

There’ll be more chances to get your hands on one of these collectible medals as we’ll also be awarding them to top players in our upcoming Super Smash Bros. Ultimate: European Online Challenge – Super Star Showdown and Splatoon 2: Super Mario Bros. 35th Anniversary Splatfest taking place in December 2020 and January 2021 respectively.