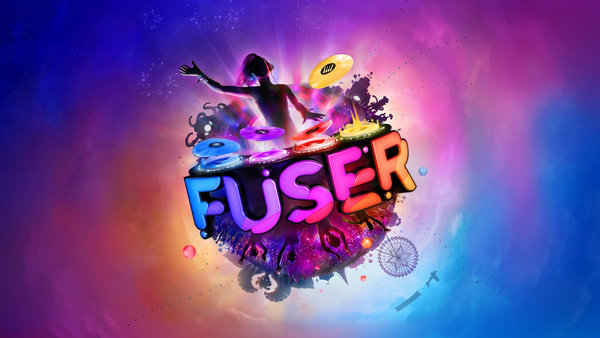 Harmonix is back again with another experiment in the music/rhythm genre. This time, no instruments or expensive peripherals are required. Fuser is the spiritual sequel to Dropmix, which was an earlier attempt by Harmonix to create a game centered around mixing various parts of a song to create a new one. 90% of the time this works shockingly well, but there are other times where you are disgusted at the atrocity you have brought upon the world.

As stated before, Fuser requires nothing but the controller that you already own. Left analog is treated as a mouse cursor, and the face buttons are your 4 clicks/tracks. Highlighting a song and pressing a button will drop its track in its designated slot on your deck. Holding a button will let you drag the track to any location where it would not necessarily belong. This allows you to break the tradition of having Beat, Bass, Lead and Vocals and do something like having multiple vocals from different songs compete for attention (this sounds terrible and I do not suggest it). I would also like to note that while in portable mode, the touchscreen is not at all utilized.

The premise of Fuser is living out your fantasy of being a DJ in the most user-friendly way possible. Each song in the game is isolated into 3 or 4 parts between beat, bass, lead and vocals. This usually leads to drums, bass guitar, lead guitar and vocals, however we all know not every song follows this format, and will generally have synths, violins, samples, trumpets and whatever other instruments an artist may have used. That's not to say things are this simple. While the game will generally take the key and BPM of the first track dropped, you are free to change it manually, or let the game smartly choose a key and BPM that would match the 4 tracks already placed. Fuser also has a very varied and large soundtrack of over 100 songs ranging from the ‘60s to 2020, covering all sorts of genres. While you might not be a fan of a certain genre (looking at your Country) that one guitar just sounds too good not to mix with your favorite song.

Fuser comes with 2 single player modes; Campaign and Freestyle, and 2 multiplayer modes; Co-op Freestyle and Battle. While all modes are there at the start, you absolutely want to head into Campaign first as most of the features of Fuser are locked. While stated earlier that you can mix around tracks and change key and bpm to your fancy, this is only scratching the surface on the true power of what can be done within Fuser. Campaign takes you through your growth as a DJ headlining for different acts, but really this is a massive tutorial in design. Every act will unlock a new feature that can then be used at your discretion. While this is an absolute drag to go through and brings back flashbacks of Final Fantasy 13, it is an absolute necessity if you are to begin to understand how to use all the features within the game. It starts off slow, allowing you to insert your own instruments where you can record a measure of a length of your choosing to play alongside the other tracks you have in the game. Don’t worry if you aren’t an artist, as the game will make it sound great. Eventually you will unlock various filters to distort your song in different ways, or make certain parts of a song repeat indefinitely. An example that I found particularly hilarious was a mix made by a Harmonix employee that played Smash Mouth’s All Star and went on “The years start coming and they don’t stop coming and they don’t stop coming and they don’t stop coming”.

Campaign introduces the request system which is also used in Freestyle co-op and battle. At its most basic, your tasks will ask you to play certain discs to fill various criteria. It might be as simple as play a blue disc or as complex as play Vocals from High Hopes. It is in your best interest to fill these out in a timely manner, as well as keep your crowd meter full for maximum points; even if it makes your music sound a little messy with the constant changes.

Freestyle is where you can absolutely let loose and use the tools you have learned to sit back, have fun, and let your creation play in the background while you write a review. There really isn’t much to this mode other than picking the songs, instruments and tools you want to bring to the party. You can also set the stage you want to party on, and the time of day.

Freestyle co-op is almost exactly what you think it is. It's your place to hold a show with up to 3 players and 8 viewers. DJ’s will take a turn playing their best combos and earning rhythmoji from the other potential 11 partiers. Viewers can tap along with the beat to give out rhythmoji to show their support to the DJ, as well as throw in requests that the DJ can fulfil to earn points. At the end of a show, the DJ with the most requests filled and rhythmoji receive will earn the title of hottest mix. Personally, I wasn’t terribly keen on this mode having a limited time to actually DJ, but this is great for just joining in as a viewer on a random group to let someone else take the reins.

Battle mode is the last option, but despite only being able to find one match in time for this review, it’s clearly where I want to spend most of my time. While fighting with another DJ over control of the deck, you are going back and forth filling as many requests as possible to get your discs to be worth a higher value than your opponent’s. This will knock them off and have your mix played. While your discs are playing, a number ticks down based on your opponent's power slowly whittling away. These battles play out in a best out of 3 duel.

Closing out, Fuser is a great game for anyone that is a fan of music and mashups, even if they have no prior background or musical talent. Harmonix has made it insanely simple to mix things up in amazing and unique ways, even without ever touching the more complex tools that were a tad beyond me. It is a great tool for creating music and has no barrier of entry, unlike most Harmonix games that require expensive and practically extinct instruments. I also feel it important to add that the Switch version is a much smaller file size than that on other platforms, and some sacrifices have been made. While the game seems to be 100% intact and gameplay looks on par, there's a lower resolution, and cutscenes do run at a lower framerate while also being quite blurry. This was very noticeable even without viewing it side by side. Gameplay itself does not suffer from this at all. I also found myself trying to navigate the menu in portable mode by touching the screen on multiple occasions, which cannot be done. Finally, it's also important to mention that the more songs you have, the more opportunities you get to make beautiful creations. Unlike Rock Band, where you would generally only buy DLC for specific songs you like, your Fuser library will benefit from nearly any song you add, whether it is something you normally listen to or not.

This review is based on version 1.1.0