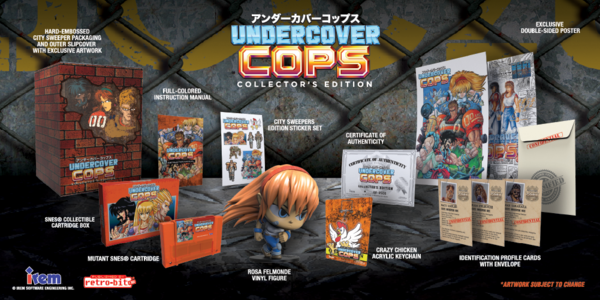 Well here's something I don't think anyone saw coming! Undercover Cops originally saw release on the Super Famicom back in 1992, but was never localized. Retro-Bit is changing that, as an official English release has been revealed. Check out details ont he title below.

Retro-Bit® and Irem® have teamed up once again to bring another masterpiece to the West. Originally released in 1992, Undercover Cops joined other Irem® classics like Kung Fu Master, Blade Master, Ninja Baseball Man, and more at the arcades. Three years later, the arcade hit was brought to the Super Famicom® in Japan but was never released in North America or Europe. Now officially translated to English for the first time, you can answer the Mayor's call and experience Zan's techniques, Matt's powerful throws, and Rosa's dazzling abilities in 16-bit glory. You can even raise the challenge up even further to experience the true ending in Hard mode - if you can survive!

Multiple retailers around the world are going to stock the game, and that includes both standard and collector's editions. You can get a closer look at both versions and the retailers stocking this game here.