The Legend of Zelda: Skyward Sword HD and Miitopia on Switch will both support amiibo 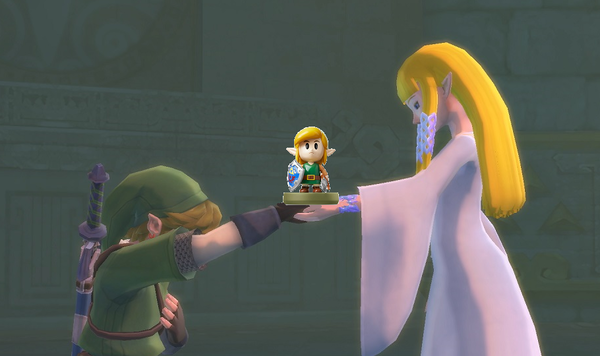 A few more tidbits about titles revealed during yesterday's Nintendo Direct are sneaking out, all thanks to eShop listings. We now know that both The Legend of Zelda: Skyward Sword HD and Miitopia are going to support amiibo in some way. Neither listing shares details on just what amiibo are compatible, nor do we know what they'll unlock. We'll have to hang tight for those details.

It can't be just emulation. They had to adjust the controls for the Joy-Con and add a new button control scheme.
It's a remaster, just like the others on Wii U.

This makes me lean way closer to Skyward Sword HD being a port and not an upscaled emulation like some have suggested.

I'm surprised people have suggested emulation. I expect this to be similar in scope to WW HD and TP HD.

It can't be just emulation. They had to adjust the controls for the Joy-Con and add a new button control scheme.
It's a remaster, just like the others on Wii U.

Galaxy on 3D All Stars was part emulation and they had to work in joy con motion/touch controls? Modders have mapped the sword controls in Skyward Sword to an analogue stick on Dolphin? Don’t see how those aspects suggested it’s not emulated.

If there’s amiibo support then yeah, it’s probably a port (unless it’s possible to add that into an emulated version, no idea). But I don’t think it was unreasonable to believe it’s emulated (still could be- have to wait until people get their hands on it) and not ported considering how it looks so 1:1 to the original, just HD. Maybe that’s just what they were going for but I’d have hoped if it’s been ported natively that they’d have made it look higher quality than it does with better textures and a better display of the “impressionist” effect of the backgrounds in the Wii version which seems to have been lost somewhat in the same way that it’s lost/less pronounced when emulated in Dolphin.

It was a different deal. Just recognizing shaking and mapping the same command to a button is much simpler than mapping actual movement to a different technology and mapping several commands to an analog stick.

As for the way it looks... when was the last time you saw the game running in person?
I was testing my Wii and Wii U discs just this past month and got to see the beginning of SS. To me, it looks much better in the new version.

And my gripe is with people who are not content with saying the glass is half full. My gripe is with the ones that poison said glass and try to shove it down your throat

They had to adapt pointer controls to gyro and touch screen on Galaxy, not just shaking of the remote. And again- independent modders have adapted the motion controls to an analogue stick in Skyward Sword so I struggle to see how it could be difficult for Nintendo themselves to achieve.

And I’m not saying it doesn’t look better- it does, but that’s by virtue of it being in a higher resolution and not by an effort to improve it in the way that past Zelda remasters have, which this seems to lack from what we’ve seen. Wind Waker completely overhauled its lighting system (whatever you think of the end result, they made an effort to “improve” it for better or worse) and Twilight Princess HD had reworked textures across the board. It seems clear from the footage we got yesterday that the textures are the same as the original just upscaled. Maybe that was a conscious decision to keep it true to the original, maybe they thought it looked good as is, who knows; but it does feel a cheap either way to not put more attention into the presentation and use the extra power available to enhance things in the way they did with the previous HD remasters. Especially so if it does turn out to have been achieved on Switch in the same way Galaxy was on 3D All Stars.

You mean the gyro you have to center every 10 seconds? Not even close to precise sword movements.

And if you looks at the history of any game in development, you'll know they tried a bunch of different things visually before deciding to go in this direction for SS. Is it the best decision? I don't know. But I do know it wasn't a spur of the moment decision on their part.

Galaxy and 64 were two games I wish they'd added a new and optional camera mode. I hate the camera in those games.

The end result and how well it works is neither here nor there but I would have imagined getting a mechanic that originally relied on an IR sensor working with only a gyroscope would be more work than getting a game that was originally designed entirely around working with a gyro to work with a gyro but hey.

And I get that regarding the art, but simply upscaling a game doesn’t automatically improve things across the board. They could have just upscaled Twilight Princess to 1080p when they made that remaster but the textures originally built for a game maxing at 480p would look horrible at a higher res, hence the complete overhaul on textures that version saw. Skyward Sword doesn’t have as much of that problem given the simpler, cleaner art style they went for with that game but the lower resolution textures are still noticeable on this version- maybe that’s a decision to try and retain some of that painterly style of the original. I just feel with some attention and extra work they could have made the game pop even more but it seems they’ve just bumped the resolution and called it a day. Again, it doesn’t look bad at all but certainly they could have done more with it.

And agreed- major missed opportunity with the camera in those games. There was a lot of TLC they could have given to all three games in 3D All Stars that they just ignored entirely. That collection was one of the disappointments in gaming for a while.

It'll probably just refill arrows and hearts or whatever like most amiibos did in Twilight Princess HD. It'd be nice if they could randomly give you extra nice rewards like medals on occasion.

Amiibo in Miitopia Switch will most likely be used in the same way as in the 3DS: to unlock the Nintendo costumes and get tickets for the Inn robot games. Hopefully they can make the Smash Mii Fighters amiibo useful in a meaningful way this time.

No doubt the Amiibo functionality will be as we've seen before, with regard to SS. It's a pity the Amiibos have taken a back seat in the Switch era, the almost limited exclusivity of them is what hampers their growth.