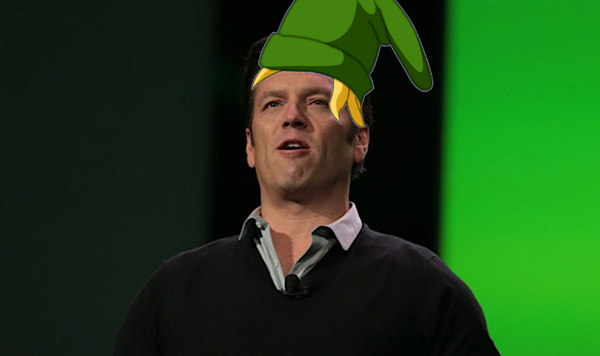 The Legend of Zelda franchise is now officially 35 years old. While Nintendo has let the date come and go without any fanfare, others in the game industry were happy to heap praise on the series. That includes executive vice-president of gaming at Microsoft, Phil Spencer. He shared some words with Inverse on the Zelda franchise, which you can read below.

"Gaming has a rich history of transporting us to new worlds and on new adventures, these journeys fold into our own lived experiences and become a part of us. The Legend of Zelda is an iconic franchise that has BROUGHT JOY TO SO MANY PEOPLE over the past 35 years and is still going strong."

Plenty of other devs and industry figures shared kind words about Zelda as well. You can find their statements here.

Phil is the kind of industry leader the videogame market needs. Meanwhile, Jim Ryan is exactly the opposite.

Phil is the kind of industry leader the videogame market needs

Yeah, a charismatic PR guy who makes "fans" feel important while he , and investors, are all out to get into your pockets...Or wallets that is! Also, Gamepass has nothing with money to do, it's all about being super nice

But I agree with his comment, though. Zelda has had a huge impact on the gaming world and inspired oh so many great other games! =)

Iwata and Reggie are proof that you can be a businessman AND be a pleasant and reasonable human being.
GamePass is a super nice way to make money hehe
In an industry where we have more lies and false promises than we deserve, it's nice to have some people who lead it well. Or would you rather they all behaved like Jim Ryan and the CEOs of EA and Activision?

Indeed, were it not for Zelda, A LOT of games wouldn't be what they are today. The only game series I can see having more impact is Mario.

What I wrote to Totalhenshin and....

Being a money hungry business man doesn't mean you have to show it or be an asshole for all to see. Some people are better at hiding, and even riding the "I'm a nice guy" wave.

Zelda is great and BOTW is one of the most genius games ever made IMHO. Actually, a lot of the big wigs in the industry, even at Sony, have said they would love to have Nintendo's talent on their team. Must hurt their fanboys

I think it's a bit cynical to assume everyone who runs a business is an asshole and the difference is that some hide it well. But that's just me.

And I think it confuses their fanboys more than anything. At the same time that their cult states that Sony can do or say no wrong, it states that Nintendo and Microsoft can't make a decent game to save their lives.
I love Sony's first party titles (not all of course, kinda hard to love some of them), but as a company I only liked them when they were playing catch up in the PS3 era.

When it comes to money I don't trust many people. VEry few, so yes it IS cynical, but so are they since they worship money! Well, humanity worships money more than all the gods we created combined.. Money is the one real god when looking at humanity. But that's just me

Not even family is safe from God (money)...I know enough about that.

THe article I read was a lot of the industry's non Nintendo big names were talking about how they wanted the Nintendo talent on their team(s). Can't remember the exact list, but there plenty if big companies/names saying it (think MS was one). Think I might have...no..must have read it on here

So when ya gettin' to Death Stranding? =)

There are plenty of people who put money first, I know that all too well. They don't have to be rich or powerful for that to be true.
There are people who live on minimal wage and would kill their grandma for $5 and a bag of chips, and they don't even like chips. And we have people who donate billions of dollars to save millions of lives.

MS is certainly a part of the group, even if not in the article, since they actually wanted to buy Nintendo hehe

I actually got Death Stranding

I got it with credit card points that were about to expire hehe
Haven't played it yet though. I finished Cyberpunk 2077 this week and started a month of EA Access for $0.99 to play Jedi Fallen Order and a few Indies. After that... I'll likely finally play The Witcher 3. But Death Stranding will be played in 2021, don't worry ;)

Yeah. But the thing is: the more money someone gets the more they want (same with control). Those who give billions already have shitloads of billions from before.

Very, VERY happy the MS and Nintendo deal never went through. Specially now that Sony Playstation Japan has given control to their American office. That means Nintendo is the one staying mostly Japanesey and we need the various genres and all.

I'll play CP2077 in year or so when it's patched, has some DLC and a PS5 version (I should have a PS5 by then...But my backlog disagrees strongly). I am not worrying, just curious o different opinions with a game like DS that is....Special!

It's kinda hard to give billions if you don't have them :P
We have people such as Bill Gates, who gives away a lot of money constantly to provide the betterment of people in less fortunate places. We also have people such as Jeff Bezos and Mark Zuckerberg... I mean... One is a Bond villain and the other is not even human hehe

CP2077 is pretty playable. There are still crashes every 10 hours or so and some bugs, but fully playable. Of course the fully patched PS5 version will run much better... I just don't know if I'll have a reason to play it again.

Don't worry. Once I play DS will know about it. I'm going in blind. I watched the first trailer and that's it. Not even review and such.

It's kinda hard to give billions if you don't have them :P

Exactly not my point. Of course you need billions to give billions, but how many of your billions to you give, or rather invest with charity? I am sure there were many a bands/artists who did the entire band-aid thing back in the 80's for a good cause, but there were also many who did it for PR/attention. They sold shitloads of more albums, both old and new, after that. It's a money driven world and that's why I don't trust people easily. But that's me

Naaah! CP2077 on consoles (and even GPC) must wait. They haven't even come with the next/now gen upgrades. They will sometime this year. And a the bugs....And the DLC is coming by the end of the year. Nah. I'll wait for the real deal. Perhaps I'll have to wait even two years.

When it comes to DS I am still not worrying, man!

Sure. But for the people who get help, I don't think they'll be questioning who sent them aid and why. They will just take the aid, man.
If I get a scholarship to study in Europe, I don't care if it was paid by someone who is just doing it to pay less in taxes or if the person truly wants to help. I'm taking the money and improving my life anyway. It's much worse for those who have ways of helping and refuse to do so.

I've been postponing Witcher 3 for 6 years and I'm still alive. So you'll be fine waiting on CP2077 hehe

And there we have it! You admit yourself that money talks

GAh! I just finished (the main) story of 13 Sentinels and I already miss the game...So I'll finish it 100% soon =) So unsure where I'll venture next in my jungle of the backlog. Really thinking of one of the Xenoblade games, RE7VR or Octopath...

Have a good...Whatever the time is over there =)

Money definitely talks, but it doesn't mean everyone is a slave to it ;)

I know the feeling, when I finished Age of Calamity I came back to do 100%
As someone who is a backlog connoisseur, I recommend tackling a large RPG from time to time, otherwise you'll never reduce it. I got a spreadsheet, statistics and everything. Quite helpful.

Have a good...Whatever the time is over there =)

While I don't think anyone disagrees that a CEO is always looking out for the bottom line, I think it's very easy to see the difference between Phil Spencer and say, Don Mattrick, Hiroshi Yamauchi, and Howard Stringer, as examples.

To say "all CEOs are the same" throws Satoru Iwata into that group. Different CEOs come from different places and different focuses in the games industry. Yamauchi didn't rise in the video game industry, which is why he sort of had disdain for gamers (but not their money). I've heard Phil speak for hours at this point during Giant Bomb's yearly E3 shows and the difference between him and when other game executives speak couldn't be more stark.

I'm not saying he's not out to make money, every major business is doing that. But he does seem to actually understand gamers and the gaming landscape better than most gaming CEOs of the past. Also, in my humble opinion, Game Pass is still probably the best deal in gaming right now if you keep up with modern games. You can literally play Yakuza 0 through 5 on your Xbox right now via Gamepass. Plus like 200+ other games. For the about the cost of Netflix. I don't know how they actually make money off of it.

Iwata is the only one who gets a "free out of jail card" on this one. He cut his own paychecks in half, and that more than once, so others wouldn't have to leave Nintendo. All the other presidents of NOJ are business people. Yeah, Yamaguchi was bad-ass deluxe, but also one of Japan's richest people.

Reggie is a PR machine mostly (I still laugh at his excuse for RDR2 not being on Switch xD ) I don't think he had much saying anyway. He was for PR.

But in the end, Phill can be as charming and charismatic he wants, he's still out for your money, not your friendship and that was my main point =)

How they will earn shitloads with gamepass is their aggressive strategy to have it on everything. The more subscribers, active or not, the more money. Wouldn't be surprised if they have been asking Ninty to have xCloud on the Switch. MS are focusing mainly on their service, not hardware anymore. Think they might even drop out of the console race eventually and just have their subscription service.

That's me. Now for some homework before work =)

The only complain I have is that you read my mind before writing everything you did :P

They didn’t forget Mario. Nothing from Nintendo for Zelda though on its 35th birthday which was on Sunday. Not even a piece of artwork.