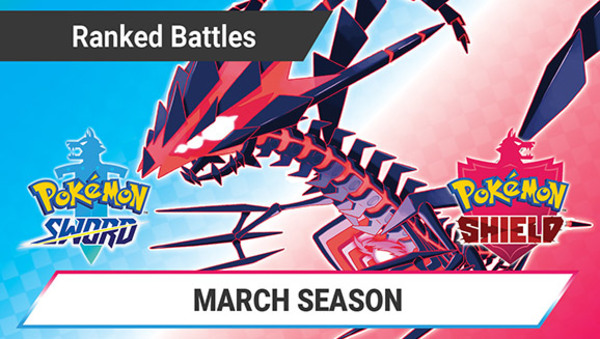 March has officially kicked off, and for Pokemon trainers, that means a whole new month of ranked battles. For full details on what Pokemon Sword and Shield offers over the next 30 days, check out the official press release below.

The new season of Pokémon Sword and Pokémon Shield Ranked Battles has begun and will run throughout March 2021. Test your Trainer skills in head-to-head battles with players around the world, move up the global leaderboards, and earn helpful in-game rewards.

The Ranked Battles March 2021 Season (Season 16) will follow Series 8 regulations, which means you can battle with one powerful, usually ineligible Legendary Pokémon at your side. Eligible Pokémon include:

How to Start a Ranked Battle

You can press the Y Button to see an overview of Ranked Battles before you begin your match.

Before battle, you'll be matched up with other players of similar rank to ensure even competition. When the season concludes, the higher the tier you finish in, the greater your in-game rewards. The March 2021 Season rewards include the following:

After the competition has ended, launch your Pokémon Sword or Pokémon Shield game.

Select Get a Mystery Gift.

Have fun battling and check back later for more Ranked Battles season news!