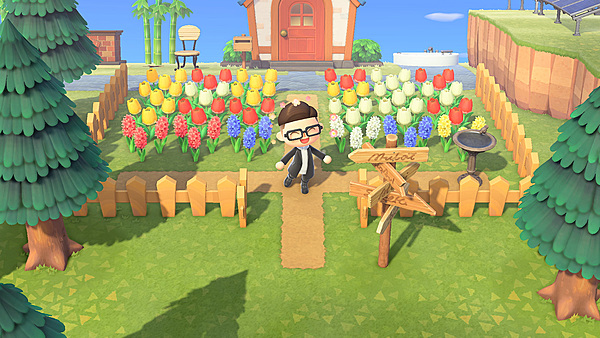 Due to the recent release of Resident Evil 3 (and potential stock shortages), Animal Crossing: New Horizons has moved down one position since last week, now landing it in 4th place on the UK software sales charts. The full top 10 list for best selling (physical) software for the week ending in April 4th, 2020 can be seen below. 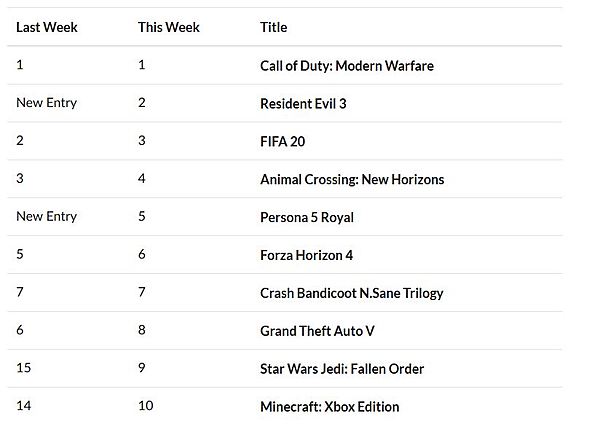 Catch a Duck is now available for Switch in Japan 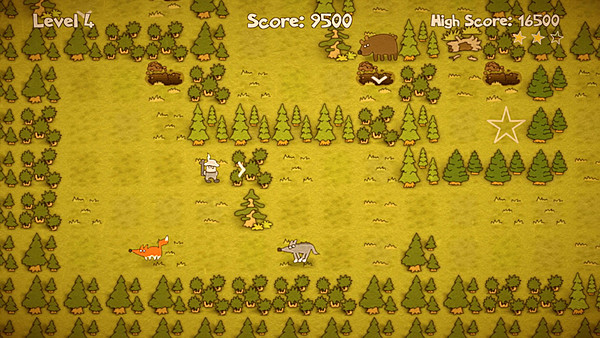 First releasing on Jul 29th, 2019 in the West, Catch a Duck from developer All Those Moments is now available for Switch in Japan from the Japanese eShop. Check out all the details from the eShop listing below.

Take control of a fox and avoid any danger ahead of you. Travel through forest enjoying puzzles, tricking your enemies and hunting ducks.

Face the challenge of catching ducks in a funny hand drawn forest. Outsmart hunters, cause a brawl between a wolf and a bear, use hideouts, move through underground tunnels, avoid traps but make enemies fall into them ! Be a sly fox !

Fly O’Clock VS has been released for Switch in Japan 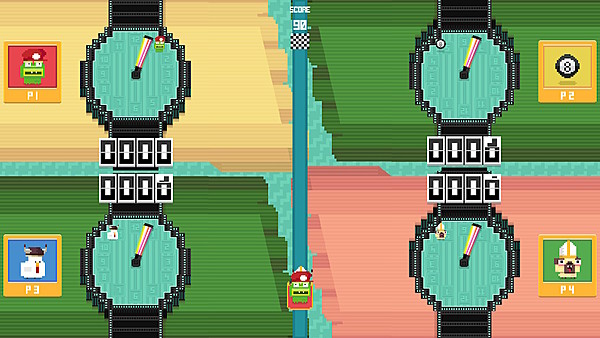 A year and a half after the game's launch in the West, Fly O'Clock is now available on the Japanese eShop under the title "Fly O’Clock VS Edition". A 10% off launch discount is currently available, pricing the arcade jumper at ¥180. If you aren't in Japan but are still interested in this title, it's currently on sale for just $0.19 on the North American eShop. Only the Japanese language is supported in the Japan release, and a 113 MB download will be required after purchase.

How long will you survive on the clock face while jumping as fast as you can? Play Fly O'Clock - incredibly fun arcade game for up to 4 players!

Fly O’Clock is a tiny, highly-addictive, single and local multiplayer arcade game. Play as a Fly jumping on the clock face while avoiding the clock hands - jump as fast as you can and leave your opponents behind!

How long will you survive in this fast-paced, incredibly fun, endless jumper game? Try it in a solo play or gather your friends and battle in a local multiplayer with up to four people!

Jump fast and unlock all of the unique characters, fun watches, and hats! Style your favorite insect the way you want! 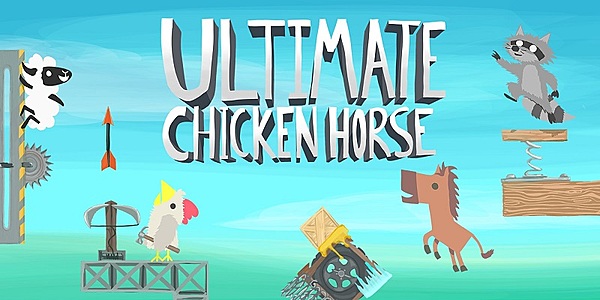 Ultimate Chicken Horse has been updated to Version 1.7.028. Check out full details on the update below.

Madrid, Spain; April 8th, 2020 – After surprising amusement park fans with its level of realism and possibilities with its Smartphone version, Theme Park Simulator will be available on Nintendo Switch, exclusively in digital format, on April 17th.

Enjoy each of the eleven available rides in third or first person and manage its performance in real time: capacity, speed, direction, movement patterns, smoke and light effects... and watch the reaction of the visitors!

Use Nintendo Switch touch screen to calibrate the speed and direction of the rides and test your customers' endurance.

Plus, each attraction offers a choice of different cameras - you can even experience them through the eyes of the passengers.

- Manage speed, direction and motion patterns of each ride through a simple and realistic control systems.
- At any time you can choose between a free camera or different pre-set views, including cameras that reflect the passengers' point of view.
- Drive a bumper car via touch screen!
- Activate light and smoke effects to surprise the passengers and change the decoration of the rides!
- The audience will react in real time to your decisions: you'll hear their screams as you increase speed and change the motion pattern of each ride.

Theme Park Simulator will be available for Nintendo Switch exclusively in digital format on April 17th. 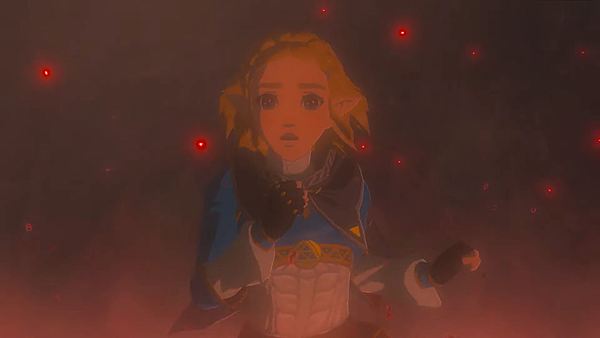 The latest Famitsu has revealed the most anticipated Switch games for the week of March 26th, 2020. For the second week in a row, the sequel to The Legend of Zelda: Breath of the Wild gets the most votes for Switch, with 530 voters eagerly awaiting the title. Bayonetta 3 from Platinum Games comes in at second place with 410 total voters. Check out the full list of most wanted Switch games from Famitsu readers below. 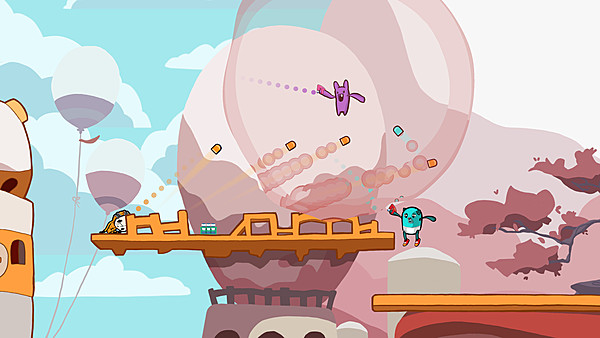 Two more demos are now available for Switch on the Japanese eShop. Demos for both Tsukue de Volleyball from publisher SAT-BOX and Retimed from publisher Stray Fawn can be downloaded for free using a Japanese Nintendo Switch account.

Q-YO Blaster is now available on the Japanese eShop, currently 90% off in NA/EU 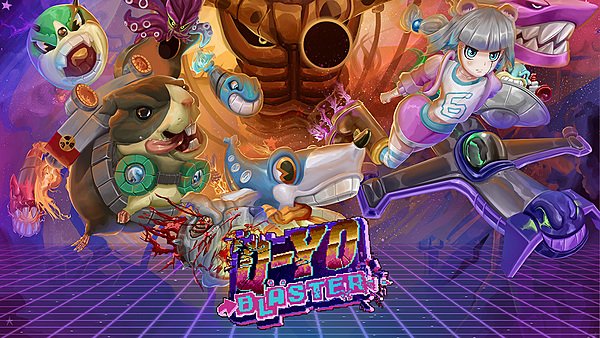 Q-YO Blaster has officially launched in Japan from publisher Forever Entertainment. Previously releasing in the West in June of 2019, you can now purchase the 2D shooter from the Japanese eShop. A 10% launch discount is being provided off the normal price of ¥999, however, the North American and European eShops are currently holding a 90% off discount until April 9th, 2020. Only the Japanese language is supported in the Japan release, and a 186 MB download is required.

Q-YO Blaster is a horizontal Shoot 'Em Up , with peculiar characters, strange enemies, bullets, many bullets and many explosions. Enter the miniature world and stop the threat.

Enjoy the rudeness with weapons, special powers and help from mystical beings.

Streets of Rage 4 will make its way on to PC, Xbox One, PlayStation 4 and Nintendo Switch for $24.99!

See our new action-packed gameplay trailer which also reveals some of Streets of Rage 4’s tributes to the original trilogy, including unlockable pixel art characters with movesets and abilities unique to their respective games; Streets of Rage’s fighters can call the cops for their special moves, while Streets of Rage 3’s characters can sprint and roll through environments. Catch Skate, Max, and all the throwback warriors making their glorious return!

These retro characters combine with Streets of Rage 4’s five hand-animated leading fighters to bring the total playable roster’s count to 17. For a full nostalgic trip, players can also switch to the series iconic original soundtrack, handing out beatdowns backed by tracks from Streets of Rage 1 and Streets of Rage 2. Taking down thugs with these timeless songs cranked up makes for an incredibly satisfying retro experience.

Spaceland seeing release for Switch in Japan on April 23rd 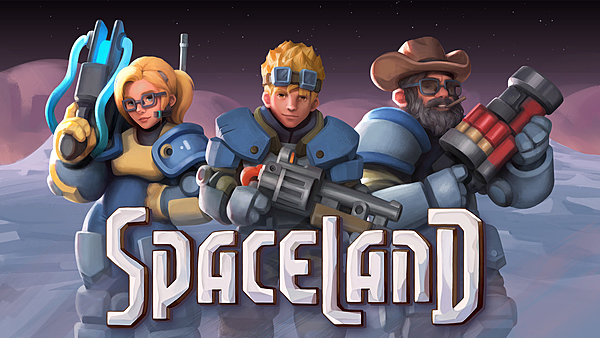 After the game's initial launch in October of last year, Spaceland will soon be coming to Japan thanks to publisher Ellada Games. The space-themed strategy game from developer Tortuga Team is now available to preload on the Japanese eShop to prepare for its launch on April 23rd, 2020. A 20% preload discount is being offered on the title, pricing the game at ¥1,719 for a limited time. A 537 MB download is required, and the following languages will be supported: Japanese, English, French, German, Italian, Spanish, Korean, Dutch, Portuguese, Russian, Chinese.

An incredibly dynamic turn-based strategy that brings back to life the traditions of old-school sci-fi tactics.

It is probably the most dynamic turn-based strategy in the spirit of the old school. Fewer shelters, more work to do. Land on a lost planet and show the mutants what you are made of. Shoot, kick, blow up and destroy. You will put together the most reckless team of fighters and unravel the mysteries of the mystical planet following the best traditions of science fiction.