When it comes to the 'Paper' treatment, Nintendo has gone all-out on Mario. There's been a few Kirby and Yoshi games that dabble in the papercraft genre, but Paper Mario is its own series. The gang over at 64 Bits doesn't think it's fair that Mario gets to hog all the folding fun, so they took a crack at things with The Legend of Zelda.

If you showed me the above trailer and told me it was Nintendo's next game, I would believe you. This is one of the most high-quality fan projects I've ever seen. The attention to detail is top-notch, and the references to the man adventures of Link and Zelda only make it that much better. Just watching the trailer makes me want Nintendo to give this idea crack. It's unbelievably charming, and I would be chomping at the bit to give it a go.

My latest Gameboy build for @mikewallacedesign. I know he already posted it, but here’s a few extra pics of the layout progression. This was definitely a fun build and I can’t wait to do some more! #legendofzelda #legendofzeldabreathofthewild #breathofthewild #zelda #nintendo #nintendoswitch #hylianstribe #hylian #mastersword #link #princesszelda #gameboy #retrogaming

The Game Boy played host to countless top-tier franchises, including The Legend of Zelda. Artist RetroEtched is paying tribute to Zelda's numerous appearances on the Game Boy with a one-of-a-kind piece that brings the series to life in a whole new way.

In the Instagram post above, RetroEtched shared a look at how the whole project came together. The Game Boy itself was just a shell to begin with, so don't worry about a working Game Boy being gutted for this piece. The sword and plinth were custom modeled, and the Game Boy's screen void was filled with foam to seat everything together.

As we said, this is a one-of-a-kind piece, so you can snatch one for yourself. You can check out RetroEtched's Etsy shop though, where he sells some other Zelda-inspired items.

We've had plenty of hand-drawn tributes featuring Isabelle and the DOOM Slayer together, but the video above is on a whole different level. We finally get to see what it would be like if Isabelle entered the world of DOOM and worked together with the DOOM Slayer. Man, these two really do look like a bad-ass pairing!

Check out an Animal Crossing tribute using over 86k dominoes

The Domino King is back once again with yet another gaming tribute. Ever one to capitalize on the next big game, this week's video showcases a tribute to Animal Crossing. All it took was hours upon hours of setup, and over 86k dominoes! All that work, and the fun's over in just 3 minutes!


Listen up, new employee! The Bureau of Shipping has a fresh batch of GR-18 delivery robots running around, and someone has to teach them the ropes. That someone is YOU! Build incredible contraptions, responsive levels, and wild adventures in the Workshop, then share them with the rest of the world and gain a following. Grab your very own GR-18 delivery robot and tackle the challenging, 80+ level training course, then take your skills to the world stage and compete against other Levelheads for top times and scores.

The Doom Slayer and Isabelle have been getting along famously lately, thanks to a whole fan-art movement. With both Animal Crossing: New Horizons and DOOM Eternal coming out on the same day, fans of both franchises couldn't help but pay tribute to one another.

The latest effort showcasing the love from both sides is a fan-made amiibo that puts Isabelle in the Doom Slayer's suit. We already knew that Isabelle was tough from her Smash Bros. appearance, but this takes things to a whole new level!

Artist creates a an amazing Sonic the Hedgehog movie bust

When the Sonic the Hedgehog debut movie trailer came out, most fans were horrified to see the design that was being used. The backlash was so bad that the movie got pushed back, and Sonic went through a complete overhaul. The version we got in the final film was still noticeably different from classic Sonic, but much more palatable.

One artist has decided to pay tribute to that version of Sonic with a sculpture, and you can watch the entire process above. It's amazing to see the project come together, and the final result is pretty damn perfect.

Thanks to MysteryMan for the heads up!
Rating: 0

Show your love of Animal Crossing: New Horizons with these fan-made Switch docks 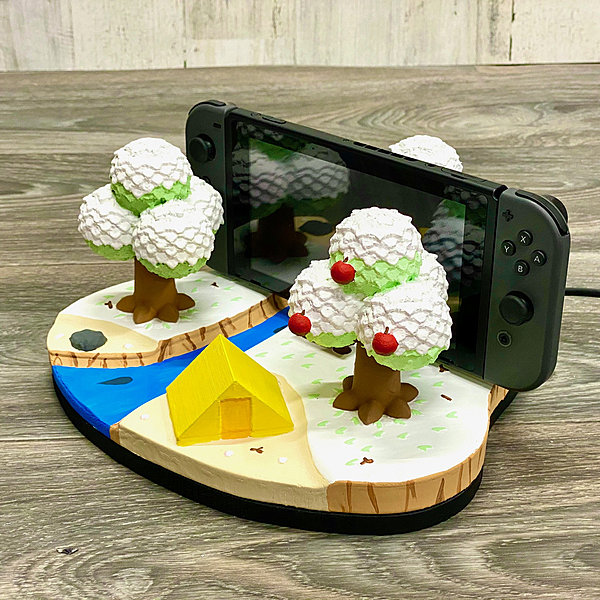 Etsy artist Senpai3D has cooked up some absolutely amazing Switch docks for anyone who's into Animal Crossing: New Horizons. The 3D-printed dock seen above is just one of four different options, all of which represent a different season in Animal Crossing: New Horizons. If you want one of these docks, you can grab one today for $100. Check out more details on the dock specs here.

Kirby has been working out pic.twitter.com/hAyVGSTMYD

Pokemon Sword and Shield art director James Turner has shared a bunch of tribute art in the past, but this time around he's back with his most unique take yet. For whatever reason, Turner has turned his attention to Kirby for a muscle-bound makeover. Seeing Kirby all beefed up is a bit strange, but somehow, the tiny hat on his head seems to make everything better!

GoNintendo reader Neverunplaying was lucky enough to bump into WWE superstar Xavier Woods at PAX East today, and he snagged himself an autograph while he had the chance. Even better, Woods was wearing a cosplay tribute to Fire Emblem: Three Houses' Claude Von Riegan. He was flanked by WWE costume designer Mikal Mosley, who was dressed as Seteth.