Zelda: Breath of the Wild fan makes a life-size replica of the Great Flameblade

I made a life size replica of the great flame blade ! from r/Breath_of_the_Wild

Zelda: Breath of the Wild may have come out over 3 years ago, but fans are still showing their love for this amazing installment in the franchise.

The latest tribute to the game comes from Redditor TheHyliann, who put together a real-life version of Zelda: Breath of the Wild's Great Flameblade. Obviously this one isn't imbued with fire, but it certainly looks that way! You can even hang it up on the wall mount to activate the lighting inside. All in all, the project took about a week to make, and it uses a cathode anode at low voltage to light things up.

This fan animation is based on Super Mario Galaxy from the recently released Super Mario 3D All-Stars collection for the Nintendo Switch.

Quoting our inner Martin Tyler, “and it’s live!” Issue 2 of @NintyFreshMag is live on @kickstarter now! Secure your copy ahead of a November release here. 👇https://t.co/MHdbMuKD7S

With a STUNNING #FZero cover by @heyphilsummers and even more fresh and retro Nintendo content!

The results are pretty amazing
17 September, 2020 by rawmeatcowboy | Comments: 0

Pokemon fans are some of the most hardcore fans there are, going above and beyond in showing their affinity for the franchise. Today we have another example of that, courtesy of animation student Darren Rafferty.

Darren has spent over 300 hours working up an animated intro for Pokemon Silver, and you can see the results of his efforts above. The end result is pretty jaw-dropping, although Darren himself appears to be a harsh critic of his own work.

"I wanted this to feel like a living, breathing world, as opposed to just an animation, and I think it turned out alright, it's still far from perfect though. Personally I really like the underwater bit where you can see the surface of the water from underneath, thought that looked well."

I etch a sketched a Psyduck from r/pokemon

There are all sorts of skilled artists out there, and millions have unique mediums that they work in. PrincessEtch happens to be a huge fan of the Etch-a-Sketch, and she uses it to great degree to create amazing pieces of art. That includes her fantastic tribute to the world of Pokemon, with a dazzling doodle of Psyduck that you see above. According to PrincessEtch herself, this drawing took just over 20 minutes to create!

Part 2 of Youtuber Nick Ha's imaginative Animal Crossing: New Horizons "Quality-of-Life Update" series has been released, showing us many more small features that would make our island life just that much better.

While Animal Crossing: New Horizons is an incredibly well-received game on Nintendo Switch, there are undoubtedly some additions and tweaks that would really spice up and improve the overall gameplay experience. These well-put-together fictional presentations give us a visionary peak into a perfect alternate reality, and leads us to hoping that Nintendo will include some of these changes in future official updates.

In case you missed it, you can check out Nick Ha's first presentation here!

Zelda: Breath of the Wild super-fan creates an unbelievable 1/150th scale replica of the Temple of Time

We've shared countless Legend of Zelda fan tributes over the years, and there's been some amazing stuff. That said, I honestly don't know that we've ever seen anything this intricate or impressive.

One Breath of the Wild fan went all-out on creating a one-of-a-kind 1/150th scale model of the game's Temple of Time. It's incredibly detailed inside and out, recreated in painstaking fashion. I'm honestly absolutely blown away by this! 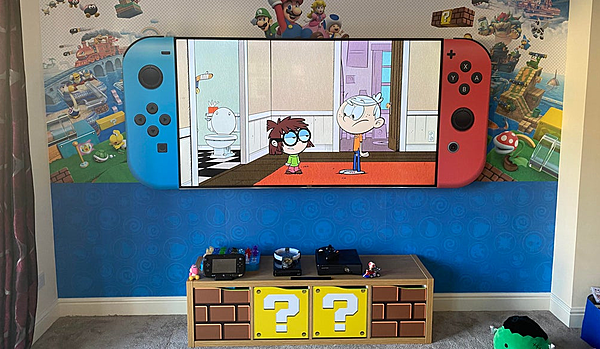 Ever since the Switch released, people have been turning their TVs into tributes for the system. That's exactly what we have here, with Redditor PJMonday giving his TV a faux Switch makeover. Some people have made units like this that open up and allow for storage, but these giant Joy-Con are for display only. They certainly get the point across, though!

Looks like there's some people out there who are on King Olly's side! Artist Fro_yla has created a huge graffiti tribute to King Olly from Paper Mario: The Origami King, as you can see in the image above. If you want to see this in person, you can spot it on the Bremerton, Washington Manette graffiti wall. This location also happens to be a Poke Stop!

As a great fan of both #GameBoy 🕹 and #Cyberpunk2077 🤖 I couldn't resist to mix those two in my latest @blender_org project: Nightcity Cyber Boy - a retro gaming console of the future 😎@BlenderNation @BlenderArtists @CDPROJEKTRED #Cyberpunk #Retro #RetroGaming pic.twitter.com/giy1G1nQ77

Cyberpunk 2077 is not coming to the Switch, so Nintendo fans will have to go to other platforms to check the game out. That doesn't mean Nintendo fans can't pretend though, and that's exactly what artist Tomek Dittrich did with his video above. Tomek wanted to showcase what a special Cyberpunk 2077-themed Game Boy would look like, so he put together a special promo video to show off his idea. I think there's plenty of people out there who would love to have one of these!