DOOM Eternal mod shows the game from a third-person perspective

With the help of mods in the Cheat Engine, developer commands become accessible in DOOM Eternal, allowing a third person camera perspective during gameplay. While buggy and totally not meant to played this way, it's still a cool way to see what the Slayer is actually up to when ripping and tearing. 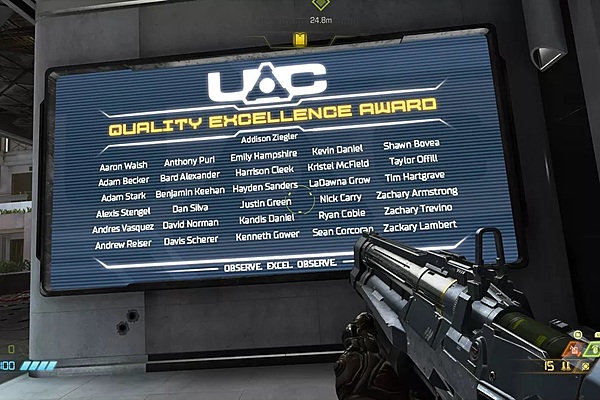 DOOM Eternal's quality assurance team is listing in the game's credits, as they were obviously an important part of the game's development. They were so important actually, that there's a second mention of the entire team during the game itself.

Eagle-eyed players have spotted that the game's quality assurance team pops up on an in-game monitor, where they're listed as winners of the Union Aerospace Corporation's Quality Excellence Award. In a time when we see some hard-working members not properly credited in games, it's nice to see a whole team get an extra nod.

See a pistol cut from DOOM Eternal in action

It might surprise you to know that DOOM Eternal doesn't have a pistol. Well, at least in the final version of the game. Turns out id Software did have plans for a pistol at some point, but they decided to yank it during development. That pistol can still be found in the source code for the PC version of the game. Check out the video above to see what the pistol had to offer.

Might not want to keep this one on the coffee table
24 March, 2020 by rawmeatcowboy | Comments: 0 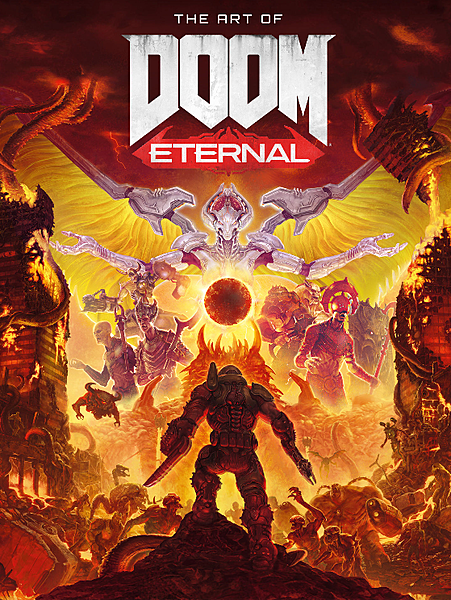 An oversized, full-color hardcover art book containing concept art and commentary from the development of DOOM Eternal, the next entry in the iconic first-person shooter series.

The newest chapter in the quintessential game franchise from id Software is here. Witness DOOM Eternal! This epic volume explores the art and development of the hotly anticipated sequel to the 2016 Game Award-winner for Best Action Game! Explore the twisted demonic invasion of Earth, the cultist UAC facilities, and plunge into otherworldly and unknown locations new to the DOOM universe. Admire the dangerous glimmering edges of the Slayer's arsenal and armor. Examine the ancient designs and breeds of Hell's soldiers and lords--all in gloriously designed full color images straight from the files of the game's artists themselves!

You can currently buy The Art of DOOM Eternal in both digital and hardcover options. Digital is priced at $20, and hardcover will cost you $32. Grab both versions here.

Doom Eternal's arsenal is full of weapons that have been around in the franchise for a long time, but they've gotten some significant tweaks and improvements in id Software's latest title. You'll recognize quite a few of your guns in Eternal from Doom 2016, but in the sequel, they often hit harder, look cooler, and sound better. Check out the video above to see a comparison of each of the returning weapons in Doom Eternal and how they've been tweaked since your last venture to Hell.

Doom Eternal is stuffed with hilarious Easter eggs and callbacks to not only past Doom games, but other all of id Software's games. There's so much chances are you won't catch them all, which is why we've compiled as many as we could possibly find, just for you!

DOOM Eternal has its fair share of new monsters, but there's also some enemies that have been sticking around since the original DOOM. Want to see how much their designs have been revamped over the years? Check out the video above for a run through DOOM history! 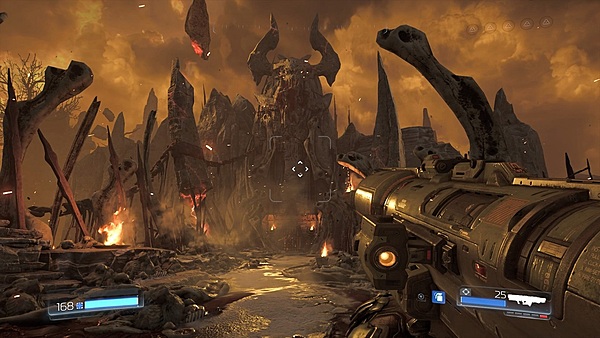 DOOM (2016) was a balls-to-the-wall experience that really breathed new life into the franchise. Creating a follow-up to that major success is no easy task, and early on in DOOM Eternal's development, it seems that things just weren't coming together.

In an interview with Shacknews, DOOM Eternal Director Hugo Martin says the game's first year of development resulted in something that just wasn't fun to play.

“No one's playing the game. You couldn't put your finger on it, but the game got really boring because nothing could touch you. You could dash away from projectiles and enemies so easily that you could blast through the whole game like it was nothing. That wasn't good.”

The team took this moment as a chance to revisit DOOM (2016) to see what worked and what didn't, and where they needed to expand in order to make the sequel more engaging than ever.

“Doom 2016 was a one-trick pony. Our combat was world-class, but everything else about the game wasn't necessarily up to the level of the combat… Every aspect of the game had to get better.” 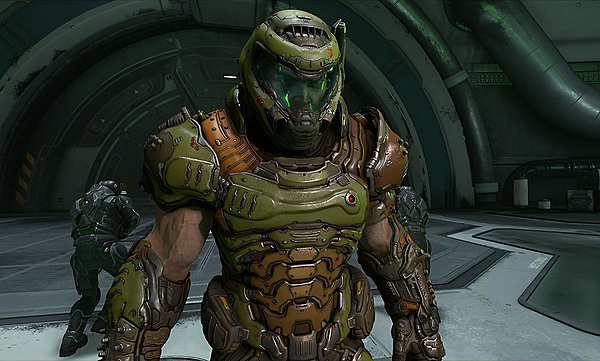 Switch owners can enjoy DOOM 64 today on Switch, but we'll have to wait a bit to have our time with DOOM Eternal. The good news is it seems the waiting will be worth it, as DOOM Eternal will provide a sizable experience.

If you're running through DOOM Eternal and taking on some of the optional side content on your way to the game's final moments, you'll spend about 16-18 hours with the game. If you want to hunt down every single secret along the way, you can expect to get 25 hours out of the experience.

Composer Mick Gordon created an absolutely musical masterpiece in DOOM (2016), and he's returned to do it once again with DOOM Eternal. Wondering just what goes into creating music for the game? Gordon decided to host a 2-hour live-stream event to showcase what his workflow is like. You can check out that entire stream above.