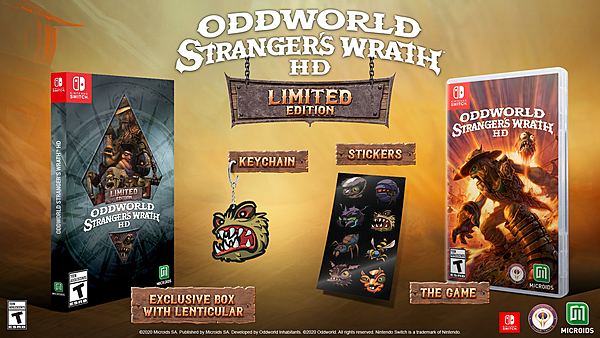 The physical version of Oddworld: Stranger’s Wrath HD is set to launch on May 26th, 2020 in North America and May 28th, 2020 in Europe. There will be a standard edition and limited edition, with the limited edition including a physical copy of the game, an exclusive box with lenticular, a “Fuzzle” key chain, and a set of stickers. Check out trailers for both regions below. 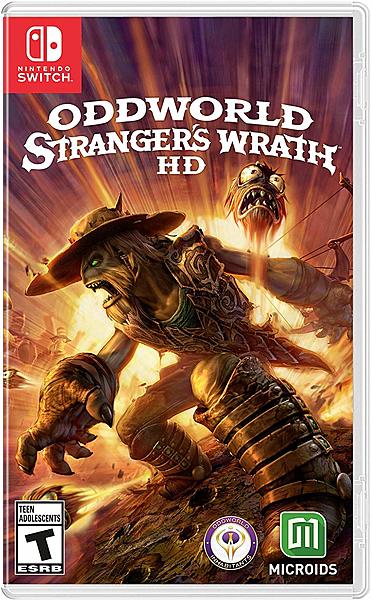 In the dusty, undeveloped wastelands of Western Mudos, cantankerous townsfolk find their settlements besieged by belligerent outlaws. Along comes Stranger, a tall, dark and enigmatic bounty hunter with a mission to capture troublemakers and scoundrels and return them to civilized townships for incarceration.

Oddworld: Stranger's Wrath HD may already be available on the Switch eShop, but a retail release is coming as well. Today we get a look at the cover art for North America, thanks to a listing on Amazon. For whatever reason, that listing has since disappeared. Looks like it might have went live a little early! 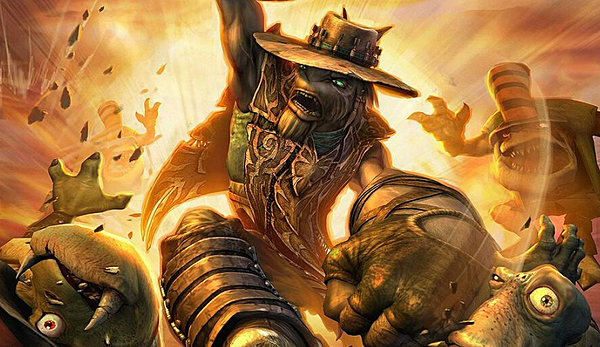 The team behind Oddworld: Stranger’s Wrath HD said that the game would get a free update that would include both French and German language support shortly after the game was launched. They've made good on their word, as the update is now available. These languages are available as two free packs that you can grab if you choose. 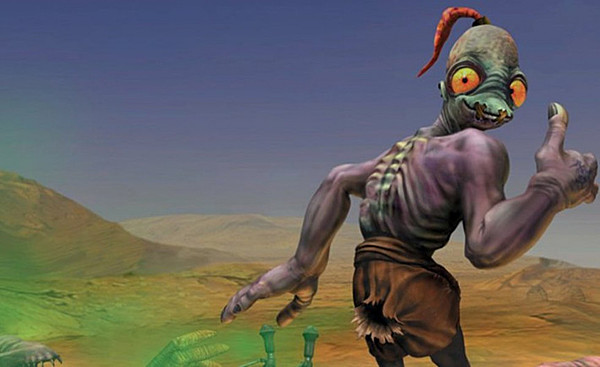 The entire Oddworld series is pretty melancholy, and features some really heavy themes. Thinking about what's going on in Abe's world can be a bit depressing...but then you can hit a button and have Abe squeeze out a fart, which makes everything better! Well, it makes things better for everyone but Lorne Lanning, creator of the Oddworld series.

In an interview with Indie by Design, Lanning brings up the topic of Abe's farts, and wants everyone to know that it wasn't his idea, and he has never enjoyed it.

“I always hated the fart. I never liked it because I didn’t like the cheap humour of it but the team really liked it, and then the press loved it and so I went with it. Still, I felt it took a little bit away from the integrity of what I was trying to achieve with Abe.”

Oddworld: Stranger’s Wrath HD - another round of gameplay

In the dusty, undeveloped wastelands of Western Mudos, cantankerous townsfolk find their settlements besieged by belligerent outlaws. Along comes Stranger, a tall, dark and enigmatic bounty hunter with a mission to capture troublemakers and scoundrels and return them to civilized townships for incarceration.

Talk about a mega-comparison! Oddworld: Stranger's Wrath came out on Switch today, but its been available on other platforms for quite some time. Check out how the Switch version stacks up in the super-sized comparison above!

Co-published with Microids, Oddworld: Stranger’s Wrath HD is available beginning today in the Nintendo eShop. Microids and Oddworld will release standard and limited boxed editions at retail later this year.

Originally released in 2005, Oddworld: Stranger’s Wrath earned a Metacritic score of 88/100 due to its potent mix of unique gameplay, engrossing storytelling and universal philosophical themes. The HD version for Nintendo Switch offers the same innovative mix of shooter, platformer and puzzle genres with a hybrid viewpoint that allows the player to switch between 1st person action with 3rd person exploration.

Oddworld: Stranger’s Wrath is a classic 10-plus hour Western motif with sci-fi and socially conscious elements. For completionists, there is an additional five hours of side missions. Coming shortly after launch player will be able to download a free patch providing subtitles for all gamespeak (cut scenes already have subtitles) in English, German, Russian, French, Spanish, Portuguese, Italian, Polish, Swedish, Finnish and Simplified Chinese.

Stranger is a mysterious bounty hunter in poor health who refuses to use guns. Needing an exorbitant amount of Moolah to buy the lifesaving surgery he desperately needs, Stranger decides to help the local town folk capture wanted outlaws and scoundrels before accepting the ultimate bounty. Rather than traditional shooters with bullets and bombs, Stranger takes a more organic approach to ammunition, using various critters (Live Ammo) to launch at enemies from his crossbow.

Led by founders Sherry McKenna and Lorne Lanning, the storytellers at Oddworld Inhabitants fashion cinematic experiences within the Oddworld universe as analogous to that of our own world. Mindfully balancing compelling storylines with propulsive gameplay, Stranger’s Wrath is able to examine timely philosophical themes such as the displacement of indigenous people, the privatization of natural resources, and the rising cost of health care without sacrificing fun.

The French publisher Microids and Oddworld Inhabitants are delighted to announce a co-publishing deal for three classic Oddworld titles, all coming to Nintendo Switch in 2020.

The first game is Oddworld: Stranger’s Wrath HD and it will release digitally on January 23, 2020. It will retail both with a standard and a limited edition, in the 1st quarter 2020. The limited edition will include some nice exclusive collectibles so stay tuned!

“We are very happy about this new collaboration with Oddworld Inhabitants regarding the publishing of these three classic titles! We are going to help as much as we can to ensure these masterpieces get the spotlight they deserve. These three games will fit quite nicely in our catalog where retro gaming has a prominent place. These games captivated an entire generation of gamers and some Microids employees, formerly working with the GT Interactive team, got to work on the original launch of the first Oddworld games more than 20 years ago,” said Stéphane Longeard – CEO of Microids.

“Microids champions the Oddworld brand and our goal to create entertainment properties that balance beauty, empathy, creativity, innovation, and craftsmanship. They understand the classic games and indie space. This partnership is a great fit for us, and we are excited to have them onboard as we bring three classic Oddworld games to the Nintendo Switch in 2020,” said Sherry McKenna, co-founder of Oddworld Inhabitants.

Oddworld Inhabitants is an independent video game developer and publisher, co-founded by special effects and computer animation veterans Sherry McKenna and Lorne Lanning. The award-winning team of storytellers and artists at Oddworld are known for creating indelible entertainment properties that speak to millions of fans worldwide. The team will release four games in 2020 including the highly anticipated Oddworld: Soulstorm, which is scheduled for a 2020 release on Epic Game Store and consoles.

Thanks to Dondom95 for the heads up!

Originally released in 2005, Stranger’s Wrath was hailed as a “stunning and exquisitely realized masterpiece” by Game Informer Magazine* and earned a Metacritic score of 88/100. It was nominated for Outstanding Achievement in Animation at the Academy of Interactive Arts & Sciences Interactive Achievement Awards.

To this day, Stranger’s Wrath’s gameplay remains unique as it offers an innovative mix of shooter, platformer and puzzle genres with a hybrid viewpoint that allows the player to switch between 1st person action with 3rd person exploration.

"We've rounded up some great new graphical and performance upgrades for the Nintendo Switch version of Stranger's Wrath and we're heading into the bounty store to deliver the best version of this game for Nintendo fans,” said Lorne Lanning, co-founder of Oddworld Inhabitants.

Taking full advantage of Nintendo Switch, Stranger’s Wrath HD has dramatically improved audio and full 1080 HD graphics at 60 fps, super tight gyro-aiming for fine adjustments, and blazing-fast load times. “Whether you take it on-the-go or use at home via TableTop or TV Mode, the game’s 12 hours of story line and five hours of side missions plays best on Nintendo Switch,” said Lanning.

Stranger’s Wrath is a take on the classic Western motif with sci-fi and socially conscious elements. It stars Stranger, a mysterious bounty hunter who refuses to use guns. Our hero is in poor health that needs Moolah to buy the lifesaving surgery. Set in the wastelands of Western Mudos, Stranger helps the town folk capture outlaws and scoundrels before accepting the ultimate bounty. Rather than traditional shooters with bullets and bombs, Stranger takes a more organic approach to ammunition, using various critters (Live Ammo) to launch at enemies from his crossbow.

We've seen everyone in the #NintendoSwitch community talking about Boost Mode, so we thought we'd let you know that Stranger is on his way, and he's using Boost Mode to get here faster 😉 pic.twitter.com/MlHd9Qa33g

Oddworld: Stranger's Wrath was originally planned for the Wii U, but that was scrapped in favor of a Switch release back in Sept. 2018. Here we are in Aug. 2019, and we still don't have a release date. The good news is, it seems like that might be changing soon. The official Oddworld Twitter account made reference to the game hitting Switch, so perhaps the release isn't far off at all.

The tweet references the game's upcoming release with a pun about the Switch's "Boost Mode," which is a mode on Switch that lets devs get some extra juice out of the hardware's CPU. Whether this reference was made as a joke, or Stranger's Wrath will actually use "Boost Mode" remains to be seen.