World of Final Fantasy Maxima - another round of gameplay

05 November, 2018 by rawmeatcowboy | Comments: 0
Originally released in October 2016, WORLD OF FINAL FANTASY is now available on Nintendo Switch™ as the powered-up FINAL FANTASY Maxima! Beloved characters from FF lore (Champions) and a multitude of capturable monsters (Mirages) appear in this fun and exciting adventure. This new and enhanced version of WORLD OF FINAL FANTASY also features the Avatar Change system, which allows the protagonists, Reynn and Lann, to fight as Champions. Fight your way through exhilarating battles as legendary FINAL FANTASY heroes!
Rating: 0 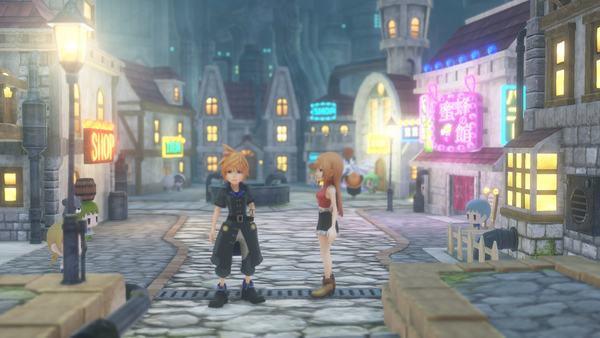 The Japanese eShop page for World of Final Fantasy Maxima has opened, and the game is now available to preload. Here's the details the eShop page offers up.

As was previously announced, Square-Enix hosted a World of Final Fantasy Maxima live-stream event to showcase some new footage and gameplay details. A summary of the event's new info can be found below.

- You can now carry 12 Mirages instead of 10.
- An item called “Treasure Search” is unlocked after clearing the game, which makes finding treasure chests easier.
- Lots of rare items have been added, mainly battle-related.
- New Game+ has been added.
- You can listen to the song “Innocent³” from World of Final Fantasy: Meli-Melo in Theater Mode.
- The “Sandstalker” minigame has been made easier to play.
- Catching the three starter Mirages (Fritt, Bablizz, and Zapt) has been made easier.
- Hauyn can join the party after clearing the game. (See her in action here at 16:44.)
- Enna Kros has been added as an extra boss battle. (See the battle in action here at 21:29.)
- An EX Dungeon in which Garland appears has been added.
- The Immortal Dragon of Darkness appears
- This is an enemy that appears at the beginning of the World of Final Fantasy: Meli-Melo manga
- It is one of the Exnine Knights, even stronger than Brandelis.
- You can fight Brandelis again.
- A “Nightmare” difficulty option where even small enemies are significantly stronger has been added.
- New, fully-voiced Champion Intervention Quests have been added.
- A secret ending has been added.
- You can battle Marilith as a boss character in an EX Dungeon. (See the battle in action here at 39:58.)
- Avatar Change: By obtaining the “Champion Stone,” you can transform into legendary Final Fantasy characters in battle
- Each character has their own battle background music and skills. (See Avatar Change in action here at 55:16.)
- Fishing Minigame: A minigame where you can fish with Noctis has been added.
- You can even reel in a Leviathan. (See the minigame in action here at 59:34.)
- Hauyn’s Archives: Characters that first appeared in World of Final Fantasy have “World of Final Fantasy (Apocrypha)” written in their “First World of Origin” field in the encyclopedia.
- These Apocrypha can be read as Hauyn’s Archives, which are scattered throughout the game world and must be gathered.
- New Mirages and Champions have been added to the encyclopedia.
- Since there is a little more story after clearing the game, additional descriptions have also been added to Lann, Reynn, and Hauyn’s entries. 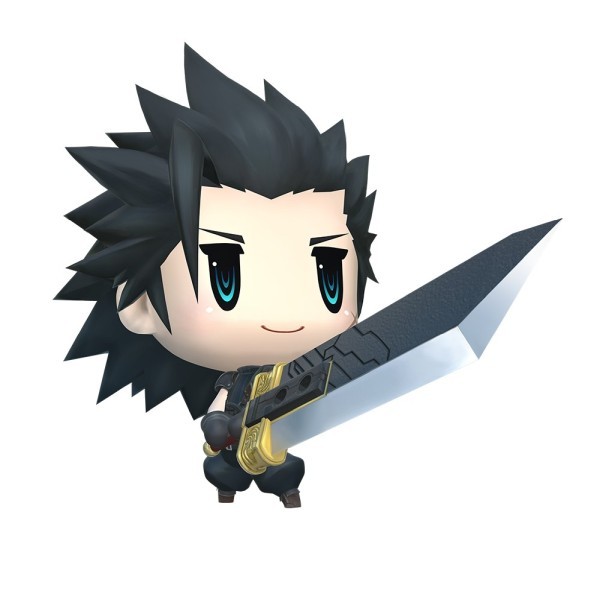 Zack is a man resurrected from death. Sometimes his memory gets confused and out of control, but when he is sane, he seems more like himself. 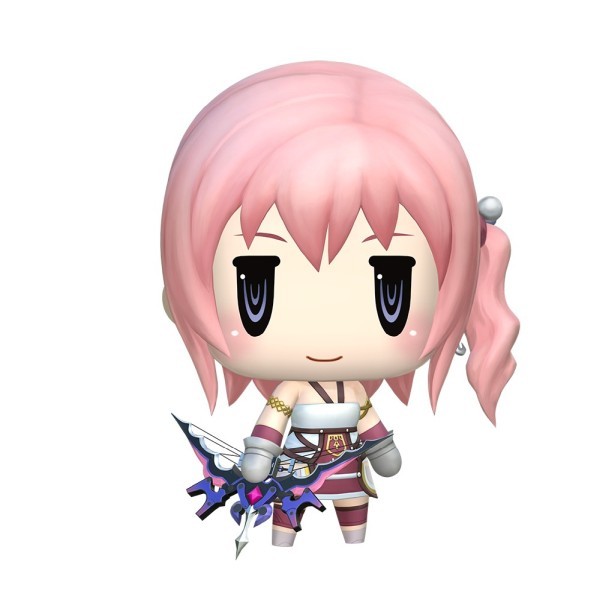 Serah is Snow’s fiancee, but she seems to be suddenly swayed by Zack upon their meeting each other…

—Zack falls from the sky and lands in front of Serah and Shiva Ixion. What happened that cause him to end up here? 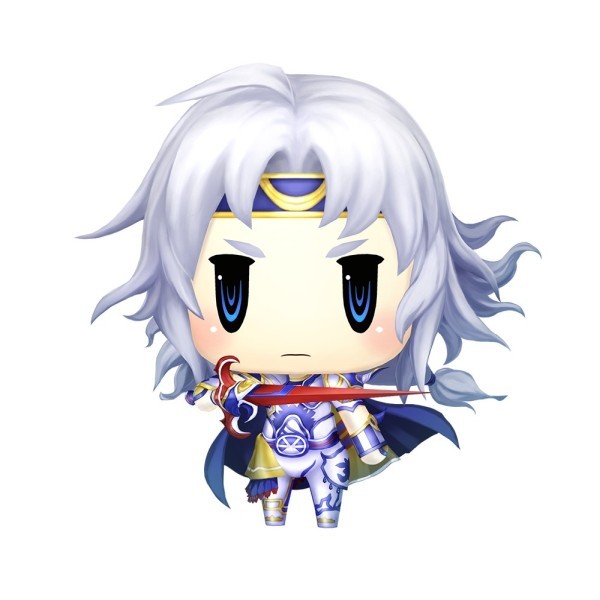 He ends up in Figaro while searching for the almighty flower known as the “Moonlight Beauty” in order to save “someone important” that has fallen to disease.

—Just like Edgar told him to do, Cecil heads towards the direction where the moon is highest. And there he finds a Yojimbo waiting…!? 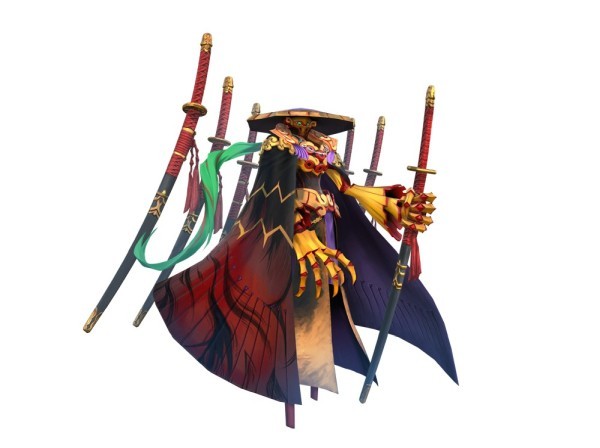 Its “Zanmato Iaigiri” attack deals physical damage to all enemies. Sometimes, it may even result in the enemy’s instant death. With its speedy slash also comes an Extra High topple strength. 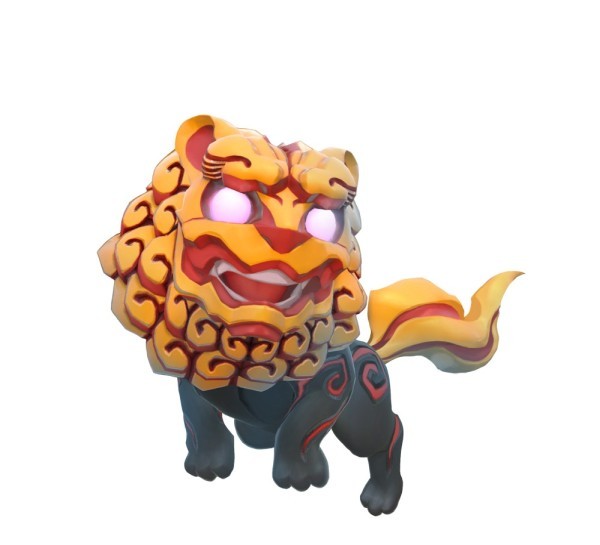 Its “Bite” attack deals physical damage to a single enemy. Its topple strength is medium. 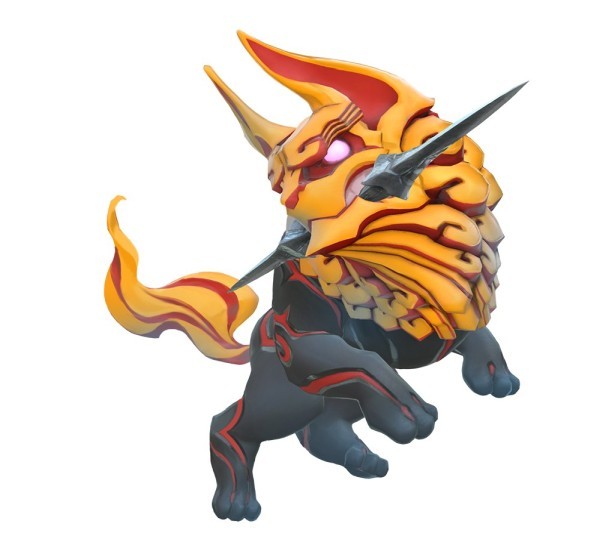 Its “Kozuka” attack strikes enemies randomly three times in a row to deal physical damage. Its topple strength is high. 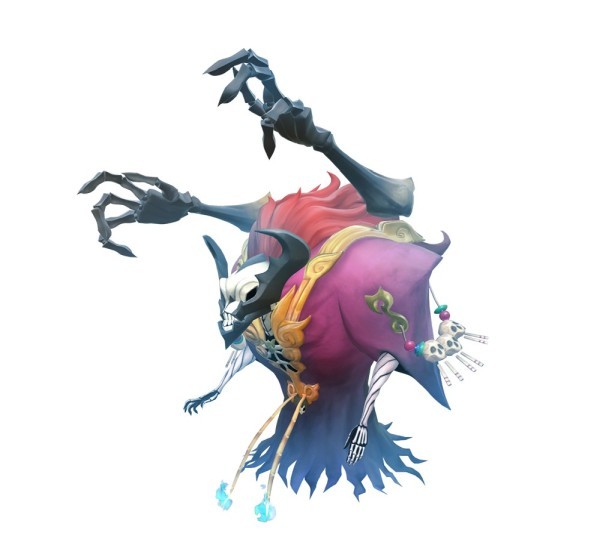 Its “Death Cutter” attack deals physical damage to a single enemy, as well as inflicts the “Doom” status ailment. Its topple strength is medium. 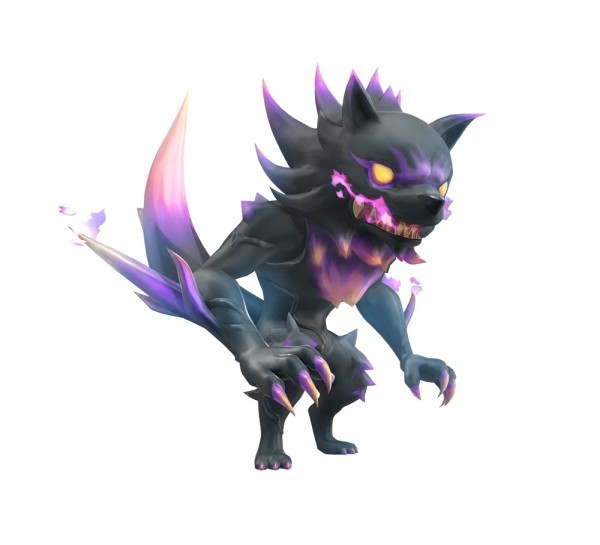 Its “Curse” attack inflicts a single enemy with various status ailments, as well as lowers its stats. 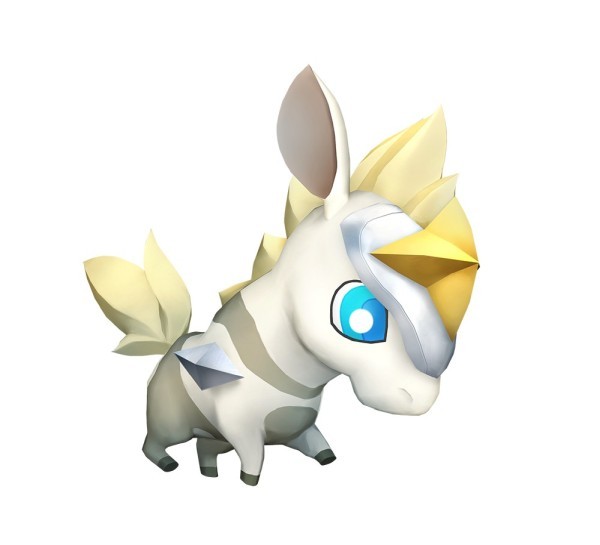 Its “Kick” attack deals physical damage to a single enemy. Its topple strength is medium.

World of Final Fantasy Maxima - another batch of screens and art 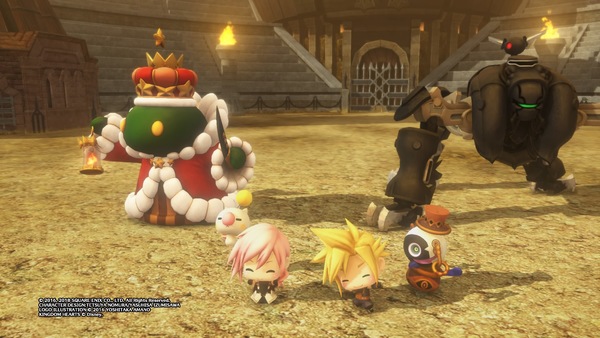 Check out more here and here

Originally released in October 2016, WORLD OF FINAL FANTASY is now available on Nintendo Switch™ as the powered-up FINAL FANTASY Maxima! Beloved characters from FF lore (Champions) and a multitude of capturable monsters (Mirages) appear in this fun and exciting adventure. This new and enhanced version of WORLD OF FINAL FANTASY also features the Avatar Change system, which allows the protagonists, Reynn and Lann, to fight as Champions. Fight your way through exhilarating battles as legendary FINAL FANTASY heroes! 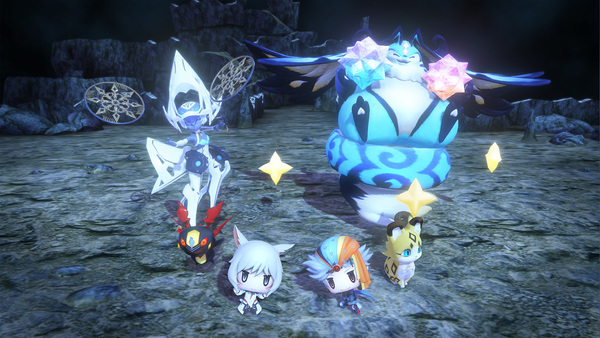 This week's issue of Famitsu features an interview with World of Final Fantasy Maxima director Hiroki Chiba. He had some details to share on the Switch port, as well as a potential sequel.

On the Switch port

“With the Switch port [of World of Final Fantasy Maxima], we took the opportunity to enhance the game. To be completely honest, our budget was low, so what we could do was limited, but we used our time carefully and did what we could!”

On handheld vs. docked

“The difference in resolution between handheld and TV modes [on Switch] caused some trouble for the staff. The engine is the Orochi Engine. The Switch didn’t support it, but we got the engine team to support the Switch, so I think this is the first Switch game using the Orochi Engine.”

“[The game] tells a bit of the afterstory of Lann and Reynn.”

On the potential for a sequel

“While there are no plans for a sequel, I have fully written the story. If Square Enix gives us its approval, we can start development right away.”

On the divisive nature of puns in the dialog

“Some people wondered if Lann’s puns were really necessary, so we considered an option to turn them off, and it was practically finished, but then we felt bad for him so we thought better of it.”

On a second playthrough idea that was dropped

“For the second playthrough, I considered an element for audio commentary from the characters that appear in each cutscene, but I threw that idea aside as it would be too metafiction.” 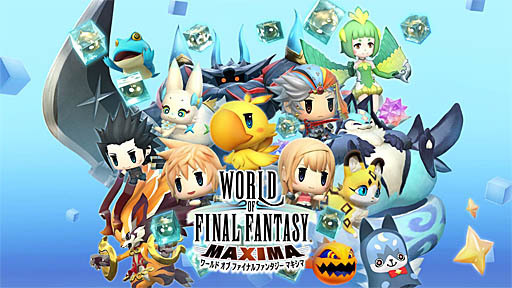 Square-Enix put out some more info on World of Final Fantasy Maxima today, showcasing a few more characters. Check out details on each below, as well as more screens here. 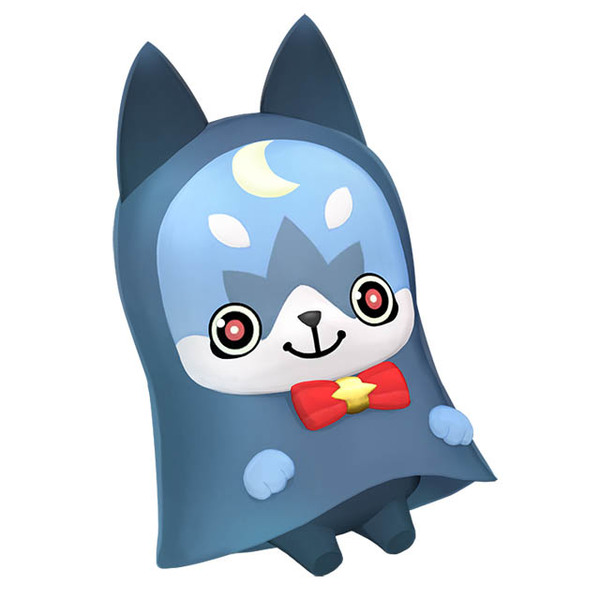 Its “Thunderclap” ability deals magic damage to all enemies. 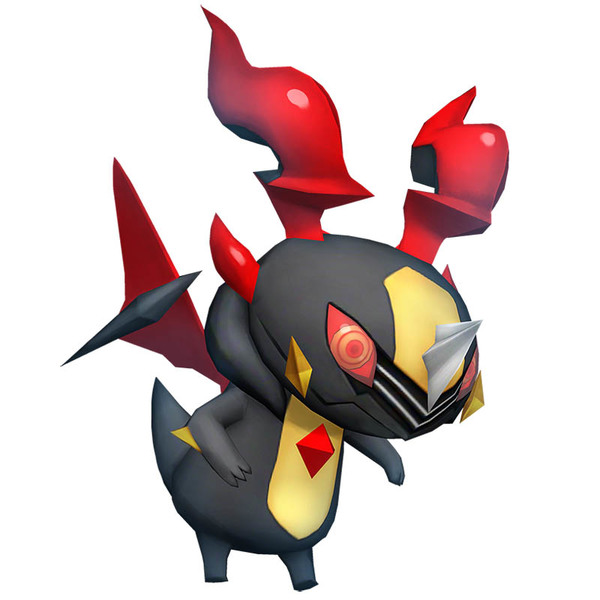 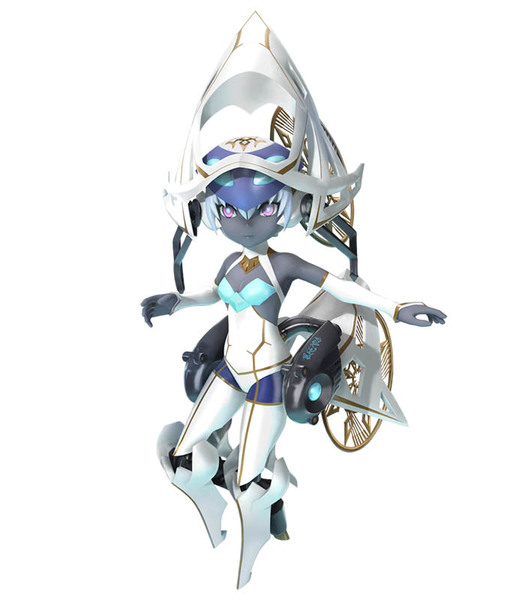 With a splendid turn, “Icicle Turn” ability deals magic damage to a single enemy and inflicts them with the “Slow” status ailment. 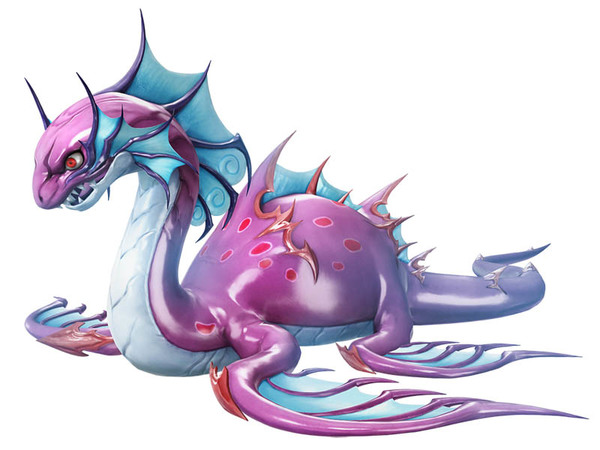 With a loud roar, its “Mega Thunder Storm” ability deals powerful magic damage to all enemies.

By clearing certain conditions, you will be able to visit to the Nine Wood Hills coffee shop once again. And if you talk to Enna Kros while there…

A boss battle will ensue! As to be expected of a God, she uses powerful techniques without effort! 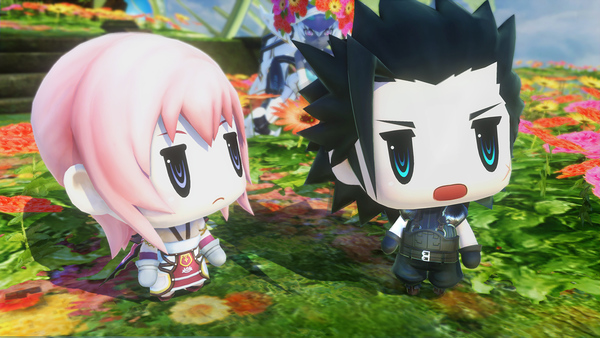 Square-Enix is gearing up for the launch of World of Final Fantasy Maxima with a special live-stream event. The company will be hosting a presentation on November 5th, 2018 from 20:00 to 21:00 JST. The stream will air on YouTube and NicoNico. Expect a bunch of new details to be shared for the game, coming from director Hiroki Chiba and Final Fantasy Portal App‘s Takeshi Kashio and Mariko Nishizawa. 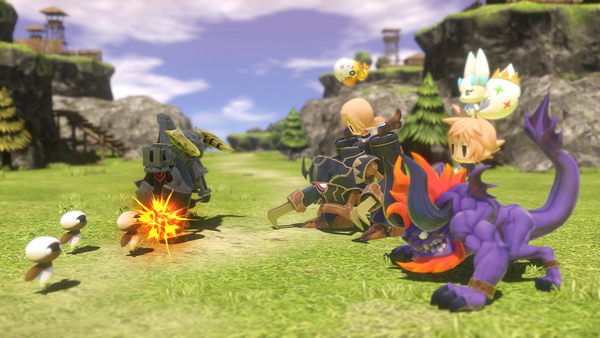 World of Final Fantasy Maxima is hitting the Switch on Nov. 6th, 2018, so the release isn't far off at all. The question is, will it see a retail release? As of right now, retailers are only showing the digital version of the game, and Square-Enix isn't really answering questions about it. That would leave the eShop version as the only option available right now. If anything changes and a retail version is confirmed, we'll be sure to bring you that info. 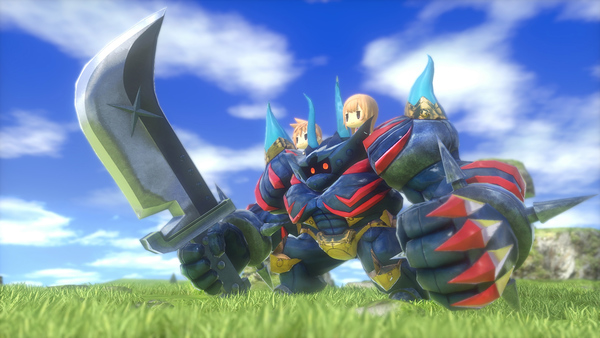 World of Final Fantasy Maxima has just been made available for preload on the Switch in Japan. Those who want to grab the game will need 10.7GB of space, and they'll have to cough up ¥6,264. The Japanese version of the game does include and English option.