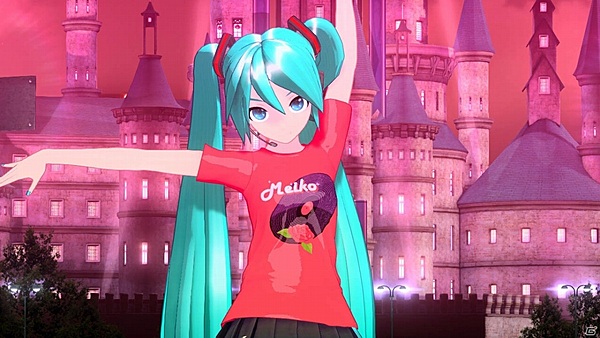 Hatsune Miku: Project DIVA Mega Mix just recently released on Switch, and SEGA is already offering a new round of free content. Two different t-shirt packs are up for grabs, which you can read up on below.

T-shirt Design Pack 1: includes the winning entries of the t-shirt design contest that was held in Europe and North America

T-shirt Design Pack 2: includes the t-shirt designs that were offered as purchase bonus at various retailers across Japan

If you want to check out more pics of the various t-shirts in these free packs, you can visit this link.

We hope you're warmed up and ready to flex those digits. Along with the choice to play in either the traditional Rhythm Game or motion-based Mix Mode, Mega Mix features a third control option: Tap Play (accessible in Tabletop or Handheld Mode on the Switch), where you use the touch screen to tap along to your favorite songs!

On top of the more than 100 chart-topping songs in the game, fans can also pick up the 'Mega Pack' ($59.99)! This bundle comes with the full game and 6 DLC song packs, each containing 6 songs, for a grand total of 36 additional songs! That's way more music than you can shake a leek at. The 6 DLC Song Pack Bundle is also available as a separate item on the eShop for $29.99, and each Song Pack is also available individually for $6.99 each.

For those who missed out on the pre-order bonus, the 'Theme Song DLC Pack' containing playable versions of theme songs from previous Project DIVA titles will be free for all players beginning on 6/12:

The secret garden by Kosaki Satoru
Look This Way, Baby by ryo
Sekiranun Graffiti by ryo
Yumeyume by DECO*27

Hatsune Miku: Project DIVA Mega Mix is now available through the Nintendo Switch eShop for $39.39. Be sure to check out our launch trailer. You can also visit our official website at https://miku.sega.com/megamix/ for more information!

Hatsune Miku: Project DIVA Mega Mix isn't just Miku's Nintendo Switch debut, it's also a major milestone for the Project DIVA series, introducing a redesigned graphical style. Fan-favorite songs like Senbonzakura and over 100 others have been reinvigorated with anime-style graphics. On top of that, a selection of songs never-before-seen in the Project DIVA series have also been added for Mega Mix, so fans can enjoy playing along with even more of their favorite tracks!

As announced earlier today, A demo for Hatsune Miku: Project DIVA Mega Mix is now available. You can check out some gameplay from that demo above, and get full details on what it offers below.

A demo of Hatsune Miku: Project DIVA Mega Mix is now available on the Nintendo Switch eShop. In this demo, you can try out two songs, Arifureta Sekai Seifuku and Romeo and Cinderella in either the traditional button-based 'Arcade Mode' or the all-new motion-based 'Mix Mode.' You'll also have a chance to play with the game's customization options before the full launch on 5/15 - choose between three modules for Hatsune Miku, or change your character skin to one of your other favorite Vocaloids, including Rin, Len, Luka, KAITO, or MEIKO. Please note, these skins are a visual change only and do not change the performer for the song.

Thanks to Kolma for the heads up!
Submitted by: kolma
Rating: 0 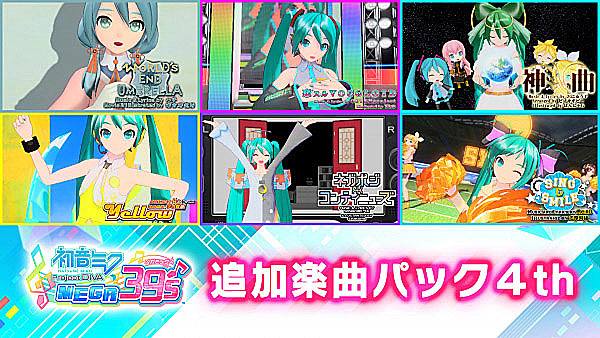 As was announced earlier today, Hatsune Miku: Project DIVA Mega Mix is getting two more waves of DLC on April 13th, 2020. You can now check out a trailer for the 4th pack above. If you missed out on the info for that pack earlier today, you can check out a recap below. 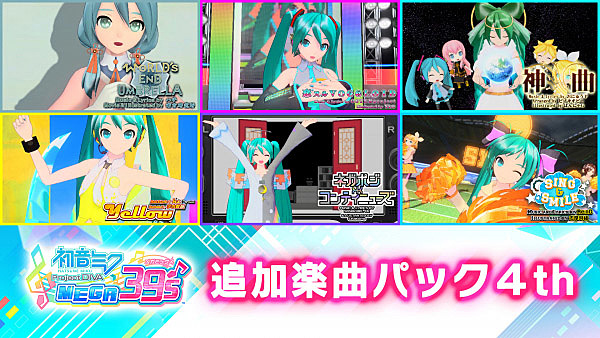 SEGA just released the 2nd and 3rd DLC packs for Hatsune Miku: Project DIVA Mega Mix, and now they're following things up with two more packs. The 4th and 5th packs are on the way, and they'll be out on April 13th, 2020. The packs will be priced at 990 yen each, or you can pay for 4,950 yen for the Music Pack Season Pass, which includes all 6 music packs. Check out details on the 4th and 5th packs below. 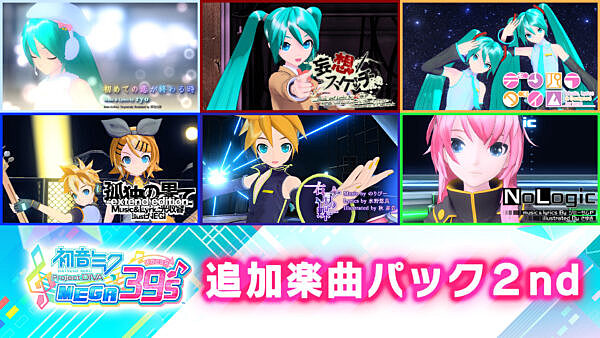 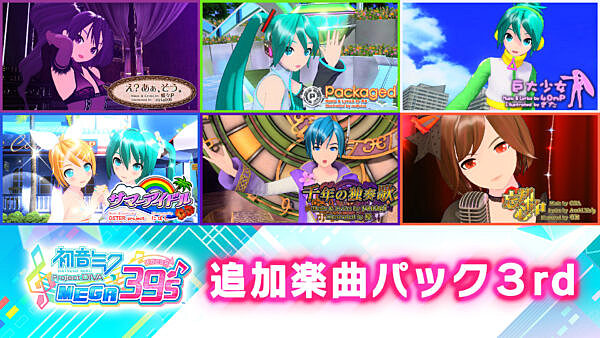 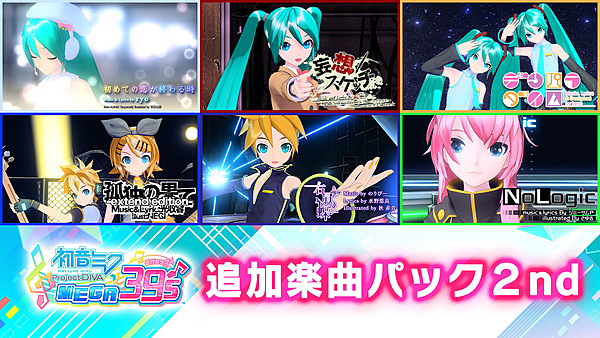 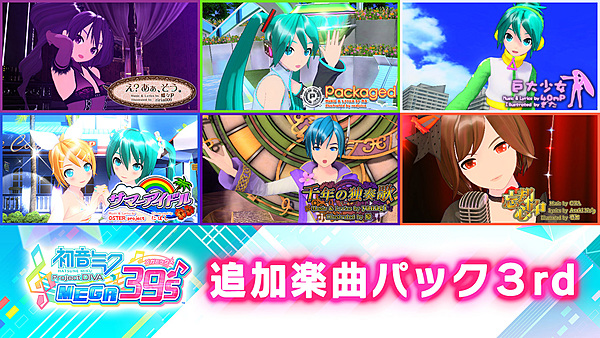 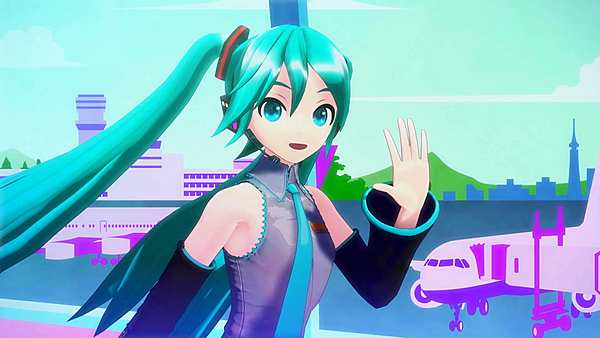 Check out another batch of screens for Hatsune Miku: Project DIVA Mega Mix 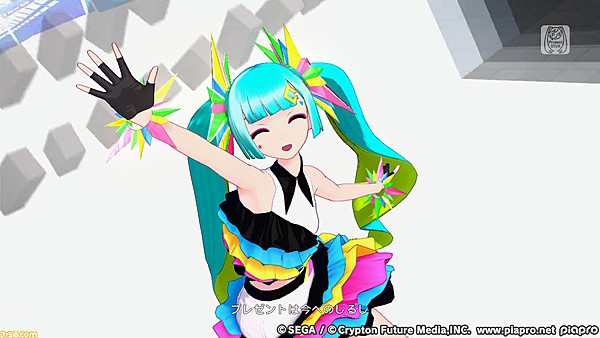 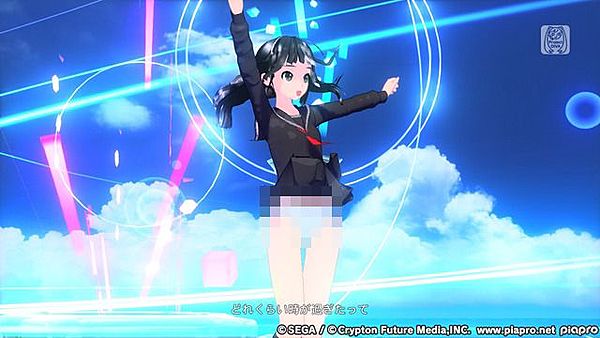 Well that was quick. Earlier this week, we noted that SEGA was going to be updating Hatsune Miku: Project DIVA Mega Mix to remove frames where you could see the underwear of characters. That update is already live and fixes that issue, but it also includes the following tweaks.