Modus shares PAX East gameplay videos for Rock of Ages 3 and Lost Words: Beyond the Page

Modus has released two new gameplay videos to promote their upcoming titles. Check out PAX East gameplay for both Rock of Ages 3 and Lost Words: Beyond the Page above. 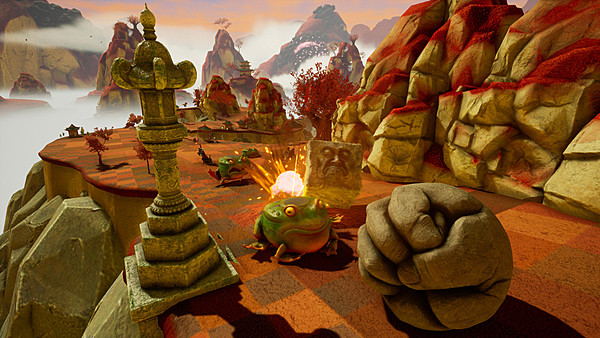 Publisher 3goo is bringing Rock of Ages 3: Make & Break to Japan. Available from the Japanese eShop sometime this summer, the price has yet to be confirmed. Development of the game is currently 60% complete, and a release has previously been announced for other regions as well (including a physical edition). You can find a summary of the game below.

Rock of Ages 3: Make & Break is competitive tower defense and arcade action rolled up with ACE Team's quirky, Monty Python-esque humor into one giant, creative game for the ages. Jump into the expansive, gut-busting story for an eclectic adventure featuring bizarre and irreverent takes on legendary characters, or for the first time, create and share your own levels to compete with friends and strangers online in a real-time mix of hectic tower defense and epic boulder-racing arcade action.

Today’s video delves into Rock of Ages 3: Make & Break’s expansive level editor, showcasing the toolset’s vast capabilities through intricate custom stages. The team also reflects on how the series came to be and the key elements fueling its trademark charm: lighthearted humor, striking recreations of historic periods of art, and distinctive action.

For an infographic of the content included in the closed alpha and the official closed alpha FAQ, check out the Modus News post here: https://modusgames.com/news/rock-of-ages-3-closed-alpha-details

Rock of Ages 3: Make & Break is a playful reimagining of iconic moments in history and mythology told through inventive gameplay, mixing strategic tower defense-themed building with swift, arcade-style assaults on enemy structures. Rock of Ages 3: Make & Break is hurtling toward an early 2020 launch on PlayStation 4, Nintendo Switch, PC, and Xbox One.

IGN Video - Rock of Ages 3: Those Big Ballsy Boulders Are Back

The monolithic Rock of Ages franchise keeps rolling out new installments, and the latest addition to the series looks to have the same rock-solid humor as its predecessors. Assuming this third entry is a chip off the old block, we'll probably have a ball. Okay, enough boulder puns, this is getting sisyphean.