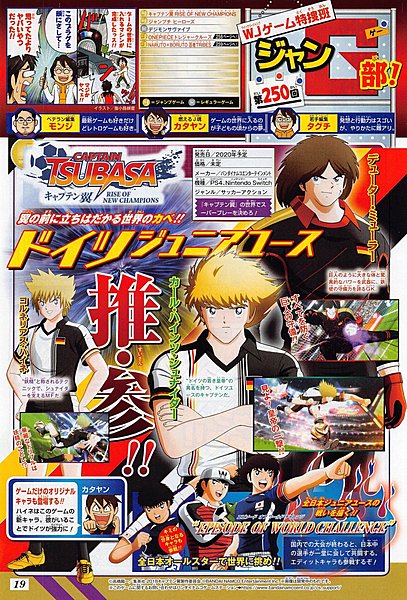 The latest issue of Weekly Jump introduces the Germany Junior Youth characters that'll appear in Captain Tsubasa: Rise of New Champions. The lineup includes familiar faces, and a new character making their in-game debut. The lineup is as follows...

- Karl Heinz Schneider (middle) is the captain of the German Youth, who holds the title of “Germany’s Young Emperor.”
- Cornelius Heine (left, game-original) is a midfielder who supports Schneider with a technique called “Youkai.”
- Deuter Muller (right) is a goalkeeper with iron wall defense, who uses his large body and tremendous power as his weapon. 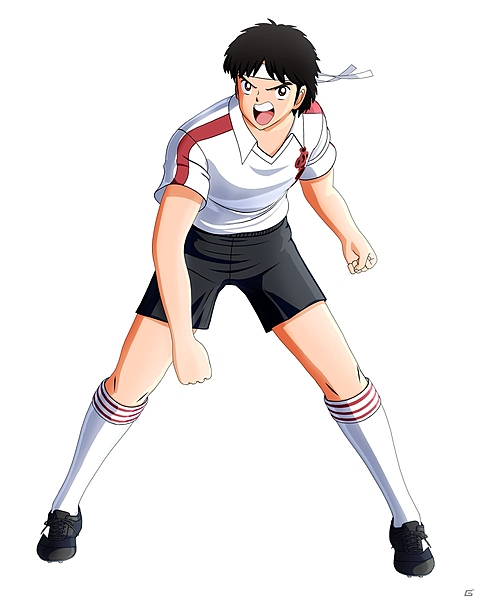 A new round of character art has been released for Captain Tsubasa: Rise of New Champions. There's certainly a wide variety of characters in the game's roster, and I'm sure we'll learn details about all of them in the near future. For now, check out a gallery of characters here. 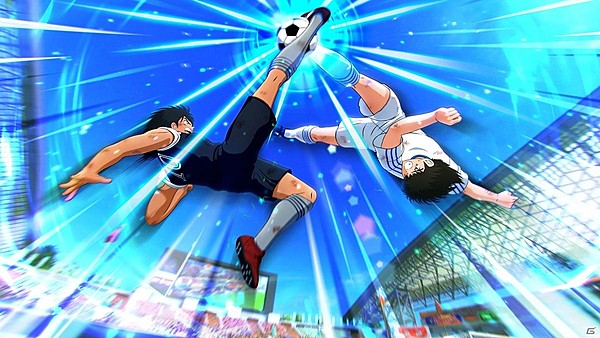 Check out the screens and art here

Only teamwork can win championships. Watch the full story trailer of Captain Tsubasa: Rise Of New Champions and be ready to show them what real football looks like when the game hits Switch this year!

Create your own path to victory
05 March, 2020 by rawmeatcowboy | Comments: 0 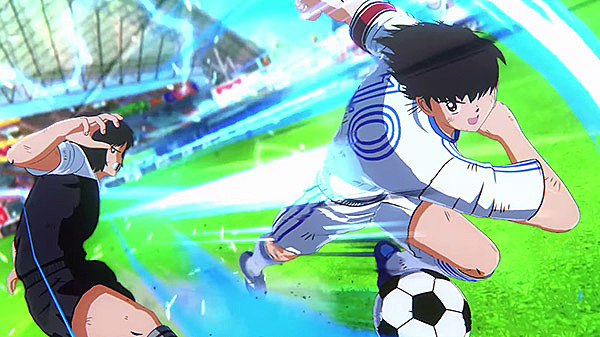 The latest issue of Jump magazine includes new details on Captain Tsubasa: Rise of New Champions. Check out info on the game's story mode and character creation below.

- “Rise of New Champions” is the name of the original story mode
- the mode uses a character creator which allows you to make your own protagonist
- choose a school to attend out of Toho Academy, Musashi Middle, and Furano Middle
- enjoy interactions between your character and various other players between matches
- a new tournament called New Hero League is the setting
- you’ll take on matches using special moves taught by characters from the anime
- a game-original anime will be included as well
- a regular story mode featuring Tsubasa Ozora and everyone else from his Nankatsu Middle School days will also be included
- this story changes based on match results and other events

This HQS statue of Kojiro Hyuga highlights the flawless talent and determination of Tsubasa Ohzora's fiercest opponent. His difficult past taught him the sense of endeavour and forged his winning mentality! Today is the grand finale of the national championship: an epic duel between the Nankatsu of Tsubasa and the Toho of Hyuga, fighting both for their memorable victory!

At this pivotal moment of the match, on Nankatsu's side, Tsubasa no longer seems able to use his Drive Shot... And if in the opposing camp, Wakashimazu is handicapped by an old injury, Hyūga is meanwhile in full control of his craft! We can see him wearing his satin black and white number 10 jersey with Toho's badge, his sleeves rolled up over his shoulders as usual, as well as his gray socks and satin burgundy and white spiked shoes. Like his hair and uniform, the playmaker has a dark look and a determined expression. The conditions are met for him to score, he must absolutely seize this opportunity if he wants to emerge triumphant from this match… While Kisugi tries to slow his progression, Hyuga stops without flinching the tackle of the number 11 hitter, who is violently thrown backwards. In order to break Nankatsu's players running towards his direction just as a huge wave, Hyūga unleashes the immeasurable power of the tiger's shot with his right foot. The beast in transparent yellow, orange and red resin, emerges from his shot and jumps on his prey in the opposing goal, driving the victory ball in his mad rush. There is a LED at the base of the tiger to illuminate its the red aura as in the anime. The ferocious creature's eyes are white, devoid of color and pity, while its sharp teeth and claws are transparent. The purple lines hatched on the deformed balloon, as well as the energy film in pink transparent resin that surrounds it, reflect all the great power of the Tiger Shot. Similarly, the red lines at the corner of Hyuga's pupils testify to the energy he injects into his shot.

In a fraction of a second, his opponents are swept away, which is not surprising when we observe the shock waves in semi-transparent resin located at the point of impact. His shot has the same effect as an earthquake, as shown by the ground cracked by the incredible shock waves in yellow resin. We notice that the ground is dark and that the green of the lawn lightens towards the center to highlight the player and his phenomenal shot! The white line visible on the base recalls those drawn on the football field.

Shocked by the violence of this devastating shot, Morisaki, the Nankatsu’s goalkeeper, remains taped on the spot… It is a magnificent goal which is part of Nankatsu's nets and an amply deserved point which is added to the Tōhō’s score ! With such a strike, Hyuga leaves everyone dumbstruck and certainly makes his mark ! Back to the Tiger he was before, he will push Tsubasa to the limit in this legendary final, celebrating two great football champions in Japan, sharing a same passion and pronounced taste for competition!

Relive iconic scenes and leave your mark in history by winning the National Championship in the story mode of Captain Tsubasa: Rise Of New Champions! 🏆⚽

"Time to show em' what REAL soccer looks like! #CaptainTsubasa"

WATCH our newest trailer for CAPTAIN TSUBASA: RISE OF NEW CHAMPIONS and get ready to hit the field in 2020!

Ultimate victory is your goal
18 February, 2020 by rawmeatcowboy | Comments: 0 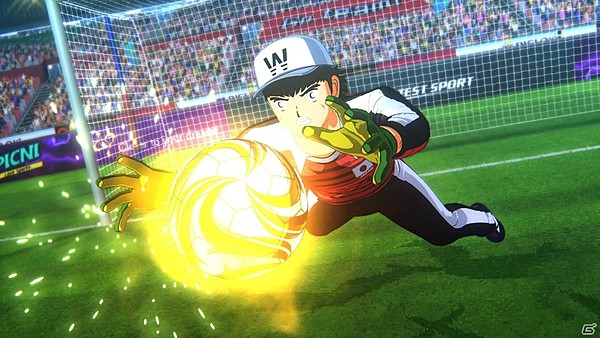 The latest issue of V-Jump has some new details on the story element of Captain Tsubasa: Rise of New Champions, which you can find summarized below.

- story mode is called Episode of Tsubasa
- the goal is to guide your team to victory, and win the national tournament
- the story changes depending on what happens during the matches
- the story features content not found in the original manga/ anime
- if you end up with penalty kicks during a match, the story will be adapted to take that into accoun
- during matches, if certain conditions are met, special scenes reproducing key moments of the manga/anime will be triggered

Captain Tsubasa: Rise of the New Champions multiplayer detailed, plus new info on gauges and skills 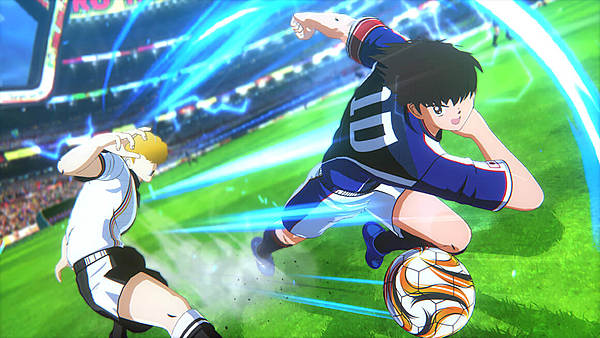 This week's issue of Famitsu contains a feature on Captain Tsubasa: Rise of New Champions, and it shares some new info. First up, we learn that the game will support 4-player multiplayer, and that goes for both local and online. The feature also breaks down some new gauge and skills tidbits, which you can find below.

- a gauge shared by all the players from a given team
- when it’s filled and you activate it, it grants various bonuses such as increase spirit gauge recovery, and more

From the creator of Captain Tsubasa
26 January, 2020 by rawmeatcowboy | Comments: 0

Back when Captain Tsubasa: Rise of New Champions was first announced, we posted a special video from Yoichi Takahashi, manga artist and creator of Captain Tsubasa. Now we have that same trailer, but with English subtitles. Give it a watch above!